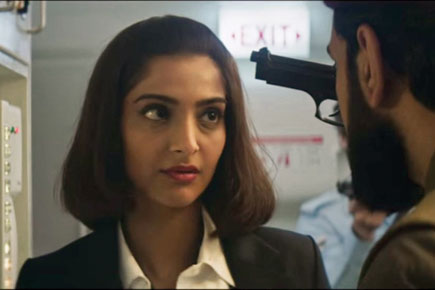 Twenty people were killed by the hijackers on Pan Am Flight 73 as it was grounded at Karachi Airport on 5 September 1986, and 12 of them were Indians. We know that the Head Purser on that aircraft, Neerja Bhanot, displayed extraordinary dedication and bravery, way beyond the call of duty, and saved many lives.

But by the end of the film, as Neerja’s mother (Shabana Azmi) delivers a lengthy, sentimental eulogy to the memory of her daughter, and the extended end credits roll down, you have to ask if the film hasn’t lost perspective and turned Neerja, posthumously, into a patriot and a nationalist, sidelining others involved in the incident. The names of the 19 others who lost their lives are not highlighted. Other members of the cabin crew, who must certainly have played significant roles in maintaining sanity on board the aircraft for 17 hours and who took personal risks in hiding the passports of Americans from the hijackers, seem to be played down. The film has been prepped for a star turn by Sonam Kapoor as Neerja, in exactly the same way that Airlift was fine-tuned for Akshay Kumar’s character, the only difference being a publicity campaign that made sure we knew everything about Neerja before the film’s release.

Cultural perspective, too, is lost with the Palestinian hijackers depicted as unintelligent individuals without a clear agenda. One of them is a sadist and molester who is cruel to children and pats Neerja down frequently. We know that their immediate intention is to fly the plane to Cyprus, but the political dimension of their act of terror is not broadened to a wider world outside Karachi Airport, or beyond Neerja’s family life in Mumbai. Good production values, locations that seem authentic and competent performances are what hold attention. Otherwise, it is the same old biopic with nationalist overtones that Hindi cinema is now producing.