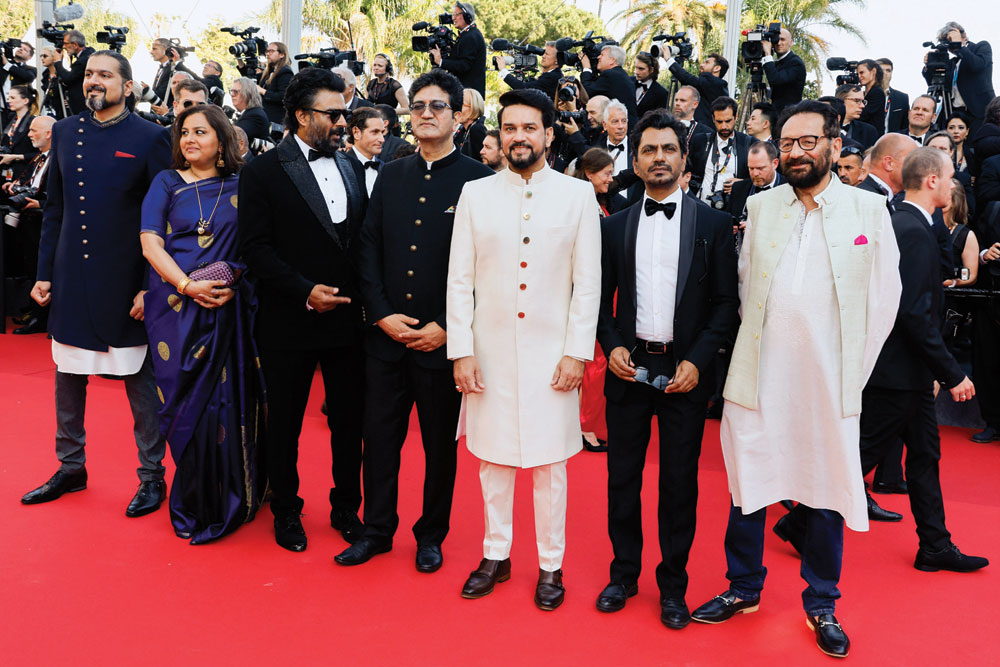 Information and Broadcasting Minister Anurag Thakur (third from right) with Bollywood artists on the red carpet at Cannes 2022 (Photo: Reuters)


WHAT IS IT ABOUT that little strip of Riviera, with its azure waters and packed streets that so enraptures moviemakers from across the world? The few steps that lead up to the Palais des Festivals and the million whirring cameras can change your life. It certainly did so for Aishwarya Rai Bachchan, who first walked the red carpet for Sanjay Leela Bhansali’s Devdas in 2002 and has gone back almost every year since as L’Oréal’s ambassador. If she stands for beauty, then Satyajit Ray forever symbolises artistry and authenticity for the French.

India has tried to go big at Cannes before, in 2002, when Sushma Swaraj, then information and broadcasting minister, led a delegation comprising, among others, filmmaker Shekhar Kapur. He was there this year too, assuring the audi­ence at the India Pavilion that the West is in decline and the East is rising. And in the East, he said, it was time for India to tell its story with confidence.

All very well. India was the country of honour at the Marché du Film, across the beach from Hotel Majestic, the minister was the young Anurag Thakur, and Deepika Padukone was part of the jury for the competition section headed by French actor Vincent Lindon. Aishwarya Rai Bachchan was on the red carpet again for L’Oréal but there was not much else to write home about. Indian cinema has long since lost the leading lights who lit up the Boulevard de la Croisette, with a mere handful now wowing serious cineastes. Anurag Kashyap, once a Cannes favourite, has faded out; Ray and Mrinal Sen have passed on; and the Berlin Film Festival is much kinder to Bollywood than Cannes is. The Marché du Film had over 12,000 film professionals from more than 110 countries this year. Around 1,200 films will host market screenings for international buyers. But India’s offering varies from the sublime, R Madhavan’s directorial debut Rocketry, to the ridiculous Kaya Palat (advertised as a film on the official programme with “famous television actress Helly Shah”), somewhat like its delegation which celebrated talent such as AR Rahman and Nawazuddin Siddiqui, as well as someone like Urvashi Rautela whose contribution to cinema is limited to appearing in vari­ous music videos.

Yet, Cannes has not lost its allure either for India or the world. It is still where the best premiere their best work, where deals are done over champagne breakfasts, and where streaming services are still kept at bay—Cannes competi­tion titles require a theatrical release in France. As a staunch believer in the big-screen experience, this tiny town still stands tall for cinema. And the world respects that. Otherwise, why would Tom Cruise, one of the greatest movie stars in the world, wait to premiere Top Gun: Maverick at the festival, two years after it was supposed to play? Or why would Ukrainian President Volodymyr Zelensky use the festival opening cer­emony to speak live from Kyiv? Or why would Oscars pick up Cannes favourite Drive My Car as Best Foreign Film?

For the world of cinema, the Cannes film festival is also reassurance that all is well after two years of the pandemic. So, AR Rahman can premiere his virtual reality film Le Musk at Cannes XR, and Pooja Hegde can gush about representing the biggest brand—Brand India—at the festival. Nawazuddin Siddiqui can laugh casually about how he came to Cannes with three films in one year while Padukone can speak about a future when Cannes comes to India.

The truth is that Indian cin­ema is no longer the soft power it once was. As Kapur said, Western culture has plateaued and the East has to rise. But for now at least, Korean cinema and music seem to have found more takers across the globe than Indian movies and music have. Indian cinema is fighting its own battle in an increasingly competitive attention economy within its borders, with a more assertive Hollywood and more intrusive streaming services.


Festivals like Cannes matter to India because they are still arbiters for the world. Filmmakers discovered here usually go on to big things on the world stage, not in the least among them being our very own Mira Nair whose Salaam Bombay! in 1988 won the Caméra d’Or for Best First
Feature Film as well as the Prix du Public for the Most Popular Film with audiences

Festivals like Cannes matter to India because they are still arbiters for the world. Filmmakers discovered here usually go on to big things on the world stage, not in the least among them being our very own Mira Nair whose Salaam Bombay! in 1988 won the Caméra d’Or for Best First Feature Film as well as the Prix du Public for the Most Popular Film with audiences. Nair, also a favourite with the Venice Film Festival, has gone on to make cinema that is real and magical, that tells stories, usually from the subcontinent, with passion and pizzazz. Old-timers at Cannes such as Gilles Jacob still speak fondly of Ray but that breed of men and women is slowly ending.

India cannot coast along the Mediterranean merely on the memory of a very tall man with an endless well of stories that came from the heart and mind of the great city of Kolkata. It has to rediscover the confidence to tell its own story, or even as Rahman said at the opening of the India Pavilion, of some other country.

The festival is run by a board comprising industry insiders that includes exhibitors and the head of the National Centre for Cinema, the main financing body for film projects in France, that operates within the French Ministry of Culture, proof that soft power requires government muscle—the French government spends 10 million Euros on Cannes every year, which is roughly half its budget. Cannes’ primacy is no accident; it is a deliberate mix of art and commerce that has survived 75 years.

It reminds me of what Caroline Scheufele, president of Chopard, told me one sunny afternoon on the rooftop of Hotel Martinez, surrounded by millions worth of her company’s dia­monds. She was explaining Chopard’s association with the fes­tival: “It’s the ambassador for our jewellery, which is 50 per cent of our business,” she said. But she was also a believer in cinema, and called Cannes “a discovery of cinema every day.” In her words: “Oscars are about one night of recognising movies the world has seen, and there’s someone pushing a cart carrying lobsters on the zigzag red carpet, and then there are these mics and TV crews asking questions and doing chit-chat. On TV, we just see the front, the glamour. Cannes is so much more.”

And she’s not even French. She’s German.

Berlinale has its icy winds and warm screenings, Venice has its vaporettos, Toronto has its unique status as Oscars’ best friend, and Sundance is perhaps the greatest laboratory for new filmmakers. But for auteurs and aficionados, Cannes with its blend of flash and fine art, its sun-dappled red carpet and resolute scalpers, its high fashion and its endless partying echoing across the town, is the calendar cinematic event to be at. Can India conquer it? Only if it first conquers its own fear of flying.