Hindi Horror Films: Beyond the Gothic 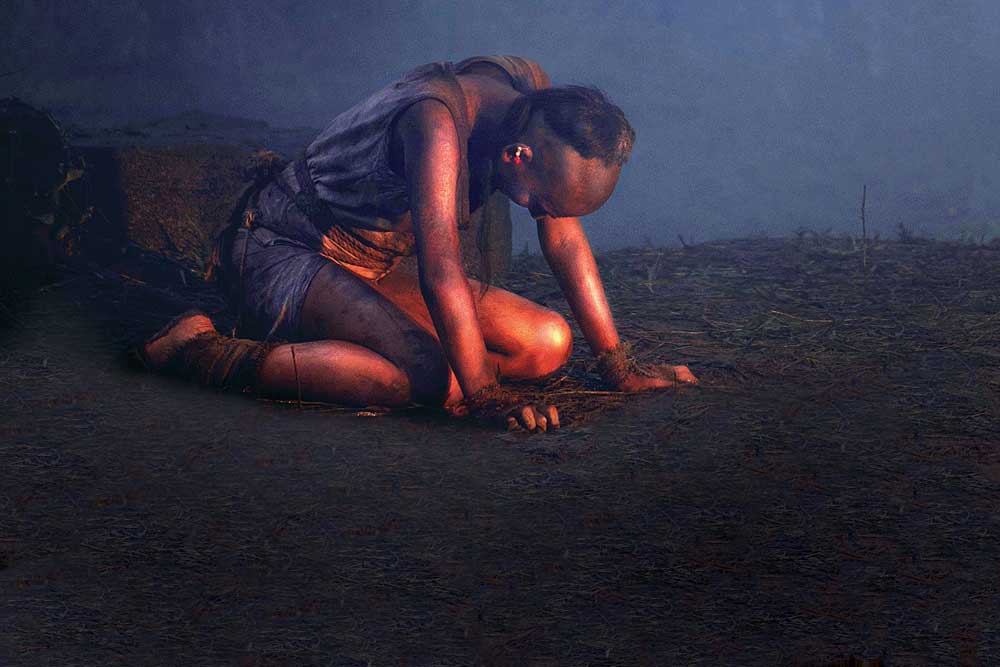 AS YOU LIE tucked in your bed at the witching hour, you may hear a familiar voice calling out your name from a distance. This voice only says your name thrice, then stops. It is the voice of Nishi, a spirit who will capture your qi if you answer its call. This was popular ghost lore in Bengal. Nishi only came for children, but there is more to this story. My grandmother told me that these spirits worked for evil tantriks who captured the qi of children in green coconut and used them for black magic. The victim would get sick and die within a week. There were a few versions, but at the centre of the tale was an evil spirit who stole the essence of life from you. Unique stories like this are abundant in every part of India. In fact, Indian mythology and folklore is extremely rich in the macabre. However, only recently has Hindi cinema started to consciously exploit these ideas to make horror films. Last year’s films like Tumbbad, Stree and Pari in many ways define a new beginning in Bollywood horror. Finally, Bollywood is using uniquely Indian characters to evoke fear. Pari uses the myth of Ifrit, Stree uses the folklore of Nale Ba and Tumbbad introduces us to Hastar, the hungry evil god who has been banished into the womb of the earth.

Tumbbad builds the perfect bridge between old Gothic style and fresh indigenous content. It does an exceptional job of creating its own mythical realm and blurs the border between good and evil. The film is visually spectacular, relies on existing horror tropes and unnerves the audience. There is a haunted fort, an old hag locked in a secret room, ceaseless rain and gloom, and a cavern that hides Hastar, the evil god. The main theme of the film is avarice. The protagonist, Vinayak, is driven solely by his greed for gold, and no amount of material wealth can satisfy him.

In many ways Hastar is like Kuber, who is seldom worshipped any longer. Kuber can make you extremely wealthy but he can never fulfill and satisfy you. He occupies an ambivalent space in Hindu mythology. He is a yaksha who is also the treasurer of gods. He is wealthy, powerful and arrogant.

During Diwali, my father’s family never celebrated Kali Puja like most Bengalis do, but we had Lakshmi Puja at home. First, there was a ritual where alakshmi would be sent away from the house. Then, my grandmother would make images of Lakshmi, Narayan and Kuber with rice paste and place them on banana stalk. She would colour the gods differently and make jewellery with flowers, a lot of effort went into it, but the appearance of the gods was not particularly sophisticated. One year, my cousin ate Kuber before the puja and fell sick. She couldn’t eat any of the festival food, and my grandmother said, “This is what Kuber will do to you. You will have all the delicacies but will never be able to truly taste them.” Tumbbad captures the idea of craving very successfully. While Vinayak gets richer and richer with Hastar’s wealth, not once do we see him as a happy man. His thirst is eternal. It tells us a universal tale about the evils of avarice but in a distinctly Indian style, against the backdrop of historical and sociopolitical shifts starting with the British era and ending in free India.

The most surprising part about Tumbbad was its box office success. While critical acclaim was expected, a horror film with no stars and a completely unique narrative style was an anomaly. Earlier, Pari had made a conscious attempt to retell a Bengali folk tale in a modern setting. The film was well-made—it even had Anushka Sharma in the lead—but failed at the box office. While predicting the fate of a film is a near-impossible task, the success of Tumbbad is due to its creation of a distinctive Indian horror aesthetics. It finally freed the horror film from the universality of Victorian Gothic and created distinct Indian horror art.

It is important to consider the conscious use of folklore in films like Pari and Stree. It would be incorrect to say that Bollywood has always exclusively used Gothic derivatives and Hollywood adaptations. In fact, Vikram Bhatt has always used folk beliefs, quasi-mythologies and superstitions in his horror films. With each film, Bhatt has tried to create a nuanced villain and even used the unreliable narrator trope in Raaz Reboot (2016). Since critics have been dismissive of Bhatt’s filmmaking, his efforts have gone largely unnoticed. Of course, his films are commercially successful but there is little appreciation for his attempts to change Indian horror. Bhatt did break many patterns in the Bollywood horror tradition—most notably, complicating the idea of evil. For example, Creature (2014) uses an Indian premise in creature horror film. The monster in the film is a Brahmarakshas displaced from his habitat. In Haunted (2011), Bhatt gave us a unique villain solely empowered by lust, yet not animal-like; rather he is a crafty, manipulative, intelligent spirit who has amazing control over his territory. Raaz (2002) borrows the basic plot of Mangalsutra (1981), but also uses the structure of What Lies Beneath (2000) to create a suspense tale. However, ultimately it is a retelling of the Savitri-Satyavaan mythology in the modern-day context: virtuous wife saves husband from an evil spirit and brings him back from dead.

Bollywood has waited for a long time to make the most of Indian mythology and literature. It is true that Indian horror writers have frequently borrowed from Indian mythology—Tumbbad is loosely based on the works of Narayan Dharap, the celebrated Marathi horror writer. Hindi horror films always had evil tantriks, Indian black magic, chudails, daayans, pretaatmas, but the structure and treatment of these elements was solely Western. There has always been a good-versus-evil framework. Vampires and shaitans have been overused; also, ghosts could almost always be defeated by gods. The dualism has been obvious in these films. But what horror films are now undergoing is a fundamental structural change. Hindi horror films are finally embracing non-duality in a conscious attempt to redefine Hindi horror cinema.

Two things stand out about Tumbbad . One is the blurring of lines between good and evil, creating a non-dual structure yet relating a universal tale of greed and avarice; and the second is keeping all the reliable horror tropes alive, yet making them unique.

Pari started this process. It revolves around a satanic cult that worships Ifrit. It’s a rare film that uses Islamic folklore and places it in the present-day context. It reverses the good-versus-evil duality and gives us a truly nuanced protagonist. One often wonders why Bollywood horror films have seldom used stories from Islamic traditions. A low-budget, obscure Pakistani film called Siyaah (2013) did a commendable job of using a djinn as a shape-shifting evil spirit and compared it to kinnaras and gandharvas from Hindu mythology.

Stree, a horror comedy, did remarkably well at the box office. Based on the Kannadiga folklore of Nale Ba, Stree is a brilliant blend of spooky and funny. It is not a suspense thriller. There is an actual evil spirit called Stree who abducts men. Using a legend, the movie raises questions about gender roles and identities. The basic premise of the film is simple, but the treatment is complex and remarkably clever.

FANTASY AND HORROR often share fuzzy borders. Hindi fantasy films have exhaustively used mythology, however their popularity declined after the 70s. Also, fantasy films never tried to be subversive or complicate the narrative in any way. They were straight- forward retellings of known stories. Since the roots of Hindi horror films lie in Gothic imagination, it has taken very long for us to make this shift away from that tradition and look for inspiration in Indian stories.

Another pillar of Hindi horror film is the theme of possession. While possession is very much a part of Indian tradition, one of the earliest possession films, Jadu Tona (1977), was inspired by The Exorcist (1973). Structurally, The Exorcist mould never went away. Even a brilliantly made film like Ram Gopal Varma’s Bhoot (2003) was not free of its influence. But both Tumbbad and Stree escape it. Stree manages to use possession for humour. A few mainstream Bollywood films have also used possession as comic subplots and ridiculed sorcerers.

Why is Bollywood horror going through this transformation? Is it a reflection of changing times? The current sociopolitical climate? Or a result of gradual change that is finally visible? I believe these changes started in 2000, but it took time for Indian horror to find its own voice. The Ramsay Brothers, rightfully credited as the founders of the horror genre in Bollywood, were heavily influenced by Hammer studio films. Since they were successful, anyone interested in making horror films jumped on the Ramsay bandwagon. Only after they started failing did filmmakers begin to explore new ideas. Horror had completely fizzled out until Vikram Bhatt’s Raaz became a box-office hit.

In many ways, it was Bhatt who brought horror back to mainstream cinema and started introducing new elements to the genre. Many scholars maintain that Ram Gopal Varma was instrumental in changing horror films in Bollywood, but I disagree. Varma made excellent horror films but their impact was not long-lasting; plus, his later horror films were extremely poor. Bhatt, on the other hand, reshaped the idea of horror in Bollywood. Today, if we are witnessing horror films that are both critically and commercially successful, this is a culmination of a change that had started with the release of Raaz. And this change has now been solidified with the recent releases.