This film is flat and tiresome, with little beyond the banal fixations of the idle rich 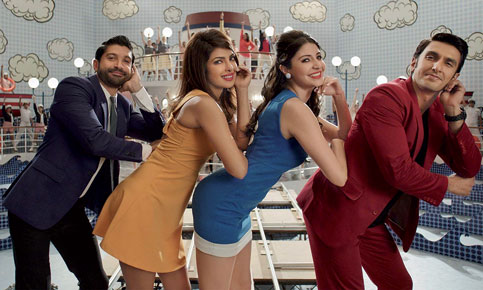 This is a movie about hollow people, the stuffed folk, leaning together, headpieces filled with straw. One would have thought that director Zoya Akhtar, blessed with a good sense of visual design, would have outgrown the subject and character studies of her two previous films—money and what it can buy you, and what it can’t—and moved on to more challenging cinema material. But Dil Dhadakne Do indicates that this fluff is her top floor, her tastefully decorated Penthouse, and she is not likely ever to make a trip to the basement, or even the mezzanine.

Her previous films—Luck By Chance and Zindagi Na Milegi Dobara—were about empty headed and beautiful people, but they had flair, irony and a nice sense of humour. This film is flat and tiresome, from the opening scenes, down through its interminable 170 minutes. The script is like a repetitive piece of music, composed on just one major and one minor key.

The major key is a tour of Greece and Turkey on a cruise ship that an Indian tycoon with failing business interests (Anil Kapoor) has organised to impress another rich Indian who could possibly save him from bankruptcy. The ship and the locations are stunning and nicely shot, though a bit like those hot tourist brochures that Indian travel agents wave around.

The minor key is the emotional fluctuations of this jittery businessman, his bored wife, and their idle progeny. The son, Kabir (Ranveer Singh), wants to keep the family private plane from being sold, and the daughter, Ayesha (Priyanka Chopra) wants to keep her judgmental husband (Rahul Bose) from making her pregnant. We don’t know if the aircraft remains in their custody at the end of the movie, but hubby dearest is given the short shrift. Good for him.

This could well be the most tiresome soap of the year. Get lots of popcorn and surf your smart phone in air conditioned comfort.