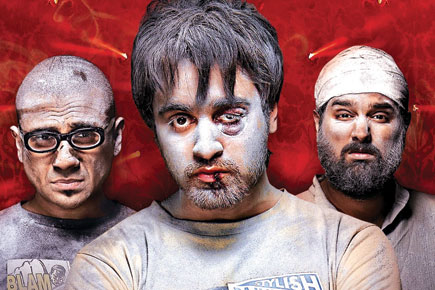 
Delhi Belly is a juvenile comedy that gets some of its biggest laughs from the use of the vernacular for crap (‘tatti’) and from the Indian ‘lota’ system. Three guys share a dump in Delhi that gets just two hours of water every morning. The idea in the film is to give one guy the runs and watch how ‘tatti’ triggers major script development.

It starts off from Mr ‘Delhi Belly’ in the loo without a drop to wash. He ends up using his roommate’s cartons of orange juice (later, he complains that his ass cheeks stick together). When he asks the roommate to take a packet of his stool sample to the lab, the fellow mixes up packages and delivers smuggled diamonds to the lab and a tatti sample to the diamond mafia.

If you enjoy that kind of humour, Delhi Belly is the movie for you.  Unfortunately, the ‘Adults Only’ rating has shut out the audience that would hugely enjoy this film—kids under 12—reminding them, as it does us too, of diarrhoea episodes while stuck in classrooms.

The film moves rapidly from one absurd scenario to the next, with a romantic sub-plot created specially for one of  the roommates, an unlikely Tibetan called Tashi Dorjee Lhatoo (Imran). His girlfriend is Sonia (Treasurywala), an airhostess unwittingly used as a diamond courier, but he falls instead for a hard-nosed woman called Menaka (Jagannathan).

The other two comedians (Das and Roy Kapur) more or less function as his side-kicks, and with Imran’s character being given a Tibetan name, the homage is clearly to the Aamir Khan blockbuster 3 Idiots and the name he had there (Phunsukh Wangdu).

The name Tashi, which is Tibetan for prosperity, may prove auspicious, but one can’t see how Aamir, who has a well-deserved reputation as a maker of quality cinema, improves his standing with this infantile movie.