These four shorts films are a beautiful tribute to Hindi cinema 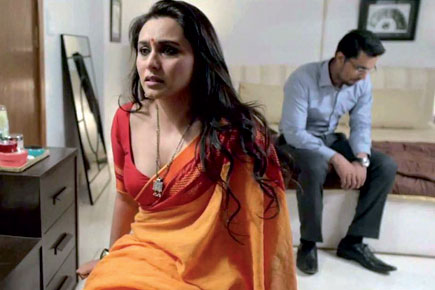 These four shorts films are a beautiful tribute to Hindi cinema


Except for one of the four stories, Bombay Talkies is a very well made film and a wonderful tribute to Hindi cinema. It looks at the origin and impact of the post-sound era through distinct aspects of Indian cultural life—the evolution of a uniquely Indian film narrative, the creation and influence of the superstar, the ability of Hindi cinema to bridge small-town India with the metropolis as much as divide them, and finally, and most beautifully, the function of film music in retaining personal and social memory.

The best story in this collection is Star by Dibakar Banerjee. It is about an actor from moffusil Marathi theatre who calls himself a ‘businessman’ because he hasn’t been able to make it as a star in Mumbai. It is a story told through composition. Among its haunting frames is an exotic emu placed next to a swanky highrise, a remote-controlled toy car zipping around the edge of Mumbai’s insane traffic, the actor’s father, in traditional theatre costume, appearing to him in a hallucination, and an astounding final shot—long distance—of the actor (Nawazuddin Siddiqui) gesticulating in his room, explaining to his daughter, through the body movements of a top-class actor, what he did that one day when we saw him perform in one take.

The sadness of life when your aspiration and talent never meet lady luck, the aspiration that cinema invents and the disappointment it often delivers are expressed so realistically by Siddiqui that this short, single performance in a surreal setting might well rank as one of the most astonishing in the last decade of Hindi cinema.

Almost as impressive is when Karan Johar moves from his usual sly sub-texts and jokes about the gay Indian man to a deeply moving story of a homosexual in a dishonest marriage, living a double life; the pain this duplicity causes the people he loves and the emptiness it engenders in himself. Why did this director, so blessed by destiny, have to wait so long to tell this story? Ajeeb Dastaan Hain Yeh is his answer and the poignant title of his tale.

The repressed individual (Randeep Hooda), a fan of old Hindi film songs, is trapped in his closet and takes refuge in the unfulfilled yearnings of the musical expression. He finds a love that cannot speak its name, spoken in the songs. Without doubt, this is Johar’s best film yet.

Anurag Kashyap’s Murabba looks at a small town and at big bad Mumbai, and connects the dots between the two using the miraculous journey made by India’s biggest movie star, Amitabh Bachchan. ‘Murabba’ is a local fruit preserve that evokes nostalgia in all those who taste it. A man is sent by his father from Allahabad to ask the superstar to bite just half a piece and thus have his associative memory link his roots with his implausible destiny. From the buffalo sheds and backlanes of Allahabad to the fortress of the actor’s bungalow in Mumbai is a visual progression that Kashyap uses very effectively, and he transforms this film into a story of the evolution of feudalism in Hindi cinema. The miracle, he shows, is that Hindi film has made this extraordinary passage possible in a single lifetime.

A lottery is what it is, Hindi cinema. The negative impact of these films, the vulgarity of cultural behaviour they can trigger in young and impressionable minds is shown through Zoya Akhtar’s aptly titled Sheila Ki Jawaani. The problem here is that Akhtar doesn’t quite see it that way and actually looks at a little boy wanting to gyrate like Katrina Kaif as though it were a legitimate aspiration, something to be approved of. The other stories look at Bollywood critically, from outside, but this director clearly cannot see the wood for the trees.