Birth of the Indian Undead 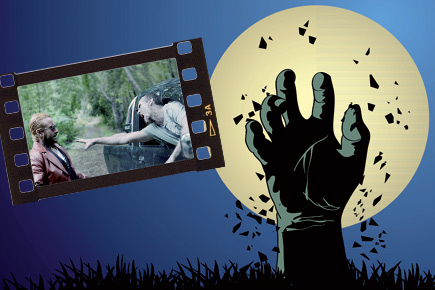 
“Yeh India mein zombies kaise aa gaye?” asks one of the leads of Go Goa Gone after their first encounter with a highly aggressive walking corpse. Another responds: “Globalisation.” It’s an obvious formulation, but besides being exactly right, it earns the film points for self-awareness—always a bonus, and especially so in a zombie comedy which plays on the absurdity of its own genre.

The movie opens with a visual familiar to anyone who has spent a sufficient amount of idle time on YouTube—a man with prosthetic fangs in blue contacts and a red pleather leisure suit thrusting to the borrowed refrains of Michael Jackson’s Thriller. What you, and the film’s stoned protagonists, are seeing is the video for the song Golimar from the 1985 Telugu film Donga, now famous worldwide as ‘Indian Thriller’.

Put ‘goli mar’ into the YouTube search bar and the first two items that pop up are versions of the video with amused captions in Portuguese and Spanish. Type ‘Indian Thriller’ on Google and you’ll find your way to Indianthrillergolimar.com, a website dedicated to the video and its hero, Chiranjeevi—complete with a brief bio of and adoring messages for the actor-turned-politician.

Kitsch spreads quickly these days, and it flows both ways. India exports its own—Bollywood, chandelier earrings, Amitabh Bachchan at Cannes in a truly horrifying seersucker bomber jacket—and imports, well, IPL cheerleaders. Our latest import, it seems, are zombies. By the time it zooms out and away from Chiranjeevi’s lacquered thrust, Go Goa Gone has already established its kitsch credentials—it knows whereof it speaks. Though Golimar’s approximation of Jackson’s Thriller figure is somewhere on the vampire-werewolf spectrum, the video is the perfect set-up for the first (almost) Indian zombie movie—we’re about to see something ridiculous, parodic, borrowed and therefore hilarious.

The appeal of the zombie genre lies in its campiness; it is enjoyable precisely because of its ridiculousness. Its absurdity is what is hilarious. This can be said of any B-horror tradition, certainly of the vast body of Indian low-budget horror cinema. And while in the West camp is generally a cult fascination, it wouldn’t be a stretch to say Indian cinema facilitates a mainstream appreciation of campiness and kitsch. It’s surprising, then, that it took so long for zombies to make it here. Barring Luke Kenny’s Rise of the Zombie, which came and went with little fuss last month, Go Goa Gone marks the zombie’s first venture into commercial Bollywood.

Zombies have been around in US pop culture since the early 20th century, and were part of American folklore even earlier, drawing on mythological Caribbean figures of the same name and similar disposition. But they have gained steadily in imaginative real estate since their appearance in George A Romero’s 1968 cult classic indie horror film Night of the Living Dead, which spawned several sequels and remakes, the last of which came out as recently as 2010. Meanwhile, Sam Raimi’s Evil Dead (1981) sparked its own series, and though there is some dispute about the nature of the monsters in the series, it did wonders for camp horror in general.

The creators of Go Goa Gone seem more than a little aware of this legacy, even sneaking in a reference to Evil Dead while they go through the motions of introducing the zombie as a concept, both to the characters and to the unsuspecting among the audience. Unlike the aatmas and chudails the characters rule out in their attempt to identify what they have just encountered, the zombie has barely any history in India’s horror imagination. One could speculate, as others have, that the zombie is a uniquely Judeo-Christian manifestation of the anxiety and horror surrounding death—what happens to all those bodies evacuated of souls? As a counterpoint to this, the bhatakti hui aatma of Hindi horror movies is a different manifestation of the same anxiety—what happens to all those souls bereft of bodies?

Zombies have frequently been interpreted as an embodiment of existential anxiety and a recent surge in zombie culture—from a parody of Jane Austen’s classic called Pride and Prejudice and Zombies to the success of prime-time TV series The Walking Dead—has provoked further interpretation.

In a 2010 article for Slate, Torie Bosch suggested the surge in zombie-themed pop culture was about ‘the economic fears of white-collar workers’ fearing obsolescence, and that it would die down once the economy recovered.

In a piece for the The New York Times that same year, author Chuck Klosterman linked the same zombie preoccupation to the repetitive banality of modern life, saying ‘zombie killing is philosophically similar to reading and deleting 400 work e-mails on a Monday morning or filling out paperwork that only generates more paperwork, or following Twitter gossip out of obligation, or performing tedious tasks in which the only true risk is being consumed by the avalanche’.

This avalanche effect is the cornerstone of the zombie threat—it feeds itself, multiplying rapidly, compelled by a mindless momentum, and there’s no ‘off’ switch. Zombies are not an intelligent, cohesive force; they cannot be reasoned with, or cured, or collectively disabled. As viewers of HBO epic-fantasy series Game of Thrones are learning weekly, the undead are the threat to top all threats (including dragons). As far as horror scenarios go, zombies are the one that most logically require cooperation among survivors—if one of us is killed, there are more to kill us.

Go Goa Gone is less a meditation of existence than on indulgence, and draws much more from the recent Hollywood trend of zombie comedies. In hindsight, this was a natural evolution. In 2004, the genre made an overt leap from camp to comedy. That year saw not only a remake of Dawn of the Dead, Romero’s 1978 sequel to Night of the Living Dead, but also an English spoof in Shaun of the Dead. Anyone who’s seen the latter will tell you what a good idea that was. Zombieland followed five years later, combining zombies with buddy comedy. Go Goa Gone is most like the latter, with the added hilarity of a stoner comedy (see Pineapple Express).

In the manner of every male buddy comedy ever, the guys of Go Goa Gone smoke pot, chase hot girls, and drink lots—clueing you into their modern, carefree existence. The movie isn’t subtle about placing us in its highly overdetermined context. At the end of an exchange of acronyms between Vir Das and Kunal Khemu in adjacent bathroom stalls—BTW, WTF, IMHO, KLPD—you know you’re supposed to be hearing plugged-in urbane youthspeak (never mind the fact that you’d just as likely hear the same stuff in a junior school girl’s loo).

Every horror film sets up an idyll to be disturbed. In Go Goa Gone, that idyll is a secret party full of friendly sexy people on a gorgeous Goan island. The lingering shots of swaying scantily clad bodies swallowing pills and exhaling smoke make the movie’s central flip all the more terrifying—suddenly, those same beautiful bodies are covered in blood and want to eat your brains, and you’re trapped with them on that island.

Go Goa Gone makes particularly good use of the sexual anxiety inherent to B-horror movies—with one of the boys trying to find ‘the moment’ with his love interest, and another, in an inspired sight-gag, running around trees with his undead hook-up from the night before. This is the most effective aspect of zombie horror—hot girls turning into terrifying monsters—and the film hinges on our ability to empathise with the characters who, like most horror movie protagonists, are just going about the business of being young and indulgent when they are interrupted by a nightmare.

Sadly, Go Goa Gone spoils its lighthearted satire with a rather hokey final moment. Tacking a lesson onto the end of two hours of lunacy turns it into an elaborate scared-straight parable. It is entirely unnecessary to spell out the metaphor in a zombie movie. We know it isn’t about zombies. It never is.