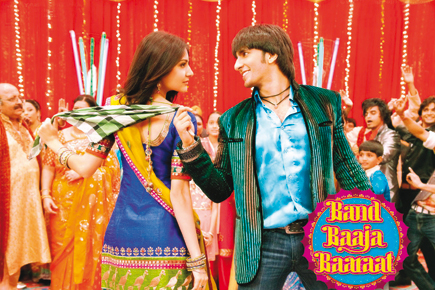 A bunch of newcomers gets the sound of go-getting Dilli pitch-perfect but slips up on the romance front.


Good writing in movies is all about how a language sounds. Phonetics is the science of pop culture and Habib Faisal seems to have cracked this nut, at least in Punjabi Hindi. He wrote and directed Do Dooni Char and has now written the screenplay for Band Baajaa Baraat.

The film doesn’t always look right, but usually sounds right. Familiarity with a specific social setting is the key, and Bittoo Sharma, the lead character in BBB, with  his precise baggage—a family background in sugarcane growing, arrival in Delhi via a spell at Kirori Mal College, a canny interest in a girl  he can learn from and move up with—is perfectly sketched.  He speaks the language he knows, and this gives Shruti Kakkar, an urban Punjabi, a shrewd idea of where this boy comes from and what he is all about.

The story is about how they get into the wedding planning business (her idea), its execution (hers too) and the go-getting culture of new money in Delhi that you have to instantly get a handle on (his chutzpah).  But the film also tells of how marriage, and the money spent on it, oils social mobility; of how a wedding is big business for planners and participants alike.

So also with Shruti (Anushka Sharma) and Bittoo (Ranveer Singh). One thing soon leads to another, and, shortly after, the film loses credibility. Language is the key again.  His crude description of their romantic encounter as raita instead of kheer indicates a cultural and personal difference which the film facetiously  papers over.

Director Maneesh Sharma has worked hard on detailing the business of weddings.  But is it too much of a good thing? Much better is the kiss that starts it all. Beautifully acted, it is tentative, gentle, slow, easy and completely natural. Was it acted?