Pablo Picasso’s politically motivated paintings are all collected in one place for the first time. A rare opportunity 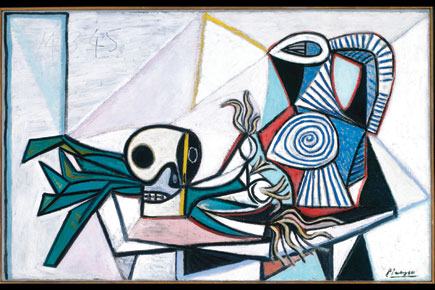 Pablo Picasso’s politically motivated paintings are all collected in one place for the first time. A rare opportunity


Considered one of the most enigmatic and gifted art figures of the 20th century, Pablo Ruiz Picasso has always maintained a fine balance between realism and tradition, naturalism and symbolism. This sense of equilibrium can be seen in his political views as well—he chose to become a pacifist instead of aligning himself with an aggressive political ideology. However, having lived through some extremely turbulent times—World War I, the Spanish Civil War, World War II and the Algerian War for Independence—the artist in him couldn’t help but respond to the atrocities of war. Some of his most significant works, like Guernica and The Rape of a Sabine Woman, come from these times. Never before have these politically-inspired creations been viewed in one place by art enthusiasts. And this is what makes the exhibition named Picasso: Peace and Freedom all the more significant.

On till 16 January 2011 at Vienna’s Albertina Museum, this unique exhibition, organised in association with the Tate Liverpool, showcases more than 200 of Picasso’s political works. The show opens with the iconic Charnel House, which was created in 1944—the same year that Picasso joined the French Communist Party, whose loyal member he remained till his death in 1973. One can also view other renowned works, such as Woman of Algiers, which was his response to the Algerian War of Independence, and Dove of Peace, which, along with his other ‘doves’, went on to become a famous emblem of the peace movement.

“People have always wanted Picasso to be seen as a womaniser and as an easy living man. That he was a communist didn’t fit in with the image of somebody who sells his pictures for millions of dollars,” says Verena Dahlitz of the Albertina Museum.

His works until World War I began can be classified in four neat categories— The Blue Period, when he essentially painted doleful subjects in myriad hues of blues and greens; the Rose period, which is characterised by the appearance of harlequins and acrobats in his creations; the Africa period, when his work was inspired by African artefacts; and the significant Cubism period, when he took apart objects, analysed the shapes and painted them in monochromatic tones. “His first, most significant political work was Guernica, which he painted in 1937. After this, political paintings were always part of his work,” says Dahlitz.

Given the legacy of India’s own freedom struggle, Indian artists and art connoisseurs can easily relate to the symbolism and metaphors used by Picasso in some of his political works. “Being extremely sensitive, Picasso always invented a new language derived from the stimuli around him, and within him. It was impossible to remain immune to an environment that encountered a fiercely politically turbulent time. Yet, he chose in his metaphorical and symbolic view to represent, through the broken face of humanity, the symbols of peace,” says Professor Rajeev Lochan, Director of New Delhi’s National Gallery of Modern Art.

Picasso once said that a “painting is not made to decorate houses. It is an instrument of offensive and defensive war against the enemy”. Although aligned with the communist movement, he chose not to engage in a war of words with his detractors. His most effective weapon was his brush.