The Artist Who Found His Voice in Prints

Krishna Reddy on the lessons of Nandalal Bose, memories of Santiniketan and Paris, and disappointment of not selling in India 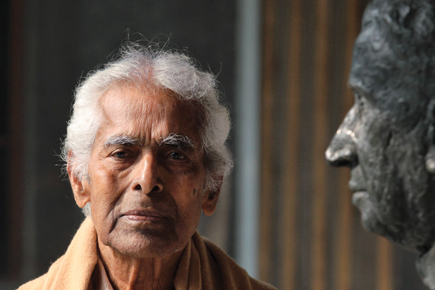 Krishna Reddy on the lessons of Nandalal Bose, memories of Santiniketan and Paris, and disappointment of not selling in India


‘Nature always begins by resisting the draughtsman, but he who truly takes it seriously doesn’t let himself be deterred by that resistance; (finally) at bottom, nature and an honest draughtsman see eye to eye’

Aa a boy who was raised in the rural landscape of Chittoor in Andhra Pradesh, artist Krishna Reddy’s work is dominated by a powerful pantheistic need to depict nature. Inspired by the sun, rivers, ponds, flowers, plants, fish and even courtyard

kolam rangolis, Reddy has made an artistic corpus out of boyhood memories. Rambling through the fields in his village, he felt a sense of wonder, and the infinite possibilities of nature dawned upon him, manifested as they are in his early, now unavailable, drawings and doodles that he made as a ten-year-old. Nature meant everything to him then, and that vision has changed little over time even as he restlessly wandered from Chittoor to Santiniketan and from Paris to finally New York, where he currently stays, enjoying the reputation of being one of the foremost Indian printmakers of his time.

For all his globe-trotting and engagement with Western culture, it is pastoral India that shaped his work, as photographer Ram Rahman puts it in a Pundole Art Gallery documentary on the artist. ‘You realise that the emphasis on drawing from nature (in his prints) and using lines to express that physical form is very important. And it’s very different from the kind of urban experience that these other artists are having, say in a city like Bombay, in formal terms. In a way what happens with Krishna is that it’s coming from a very organic root.’

Trained in sculpture at Rabindranath Tagore’s open school of Santiniketan, West Bengal, Reddy’s real talent lay in printmaking, and it is in this field that he was to make great developments.

In Chittoor, he had acquired quasi-fame as a boy who could draw exceptionally well for his age and rich patrons started showing interest in his works and encouraged him to pursue art as a career. By then, he had begun copying mythological paintings of South Indian gods and goddesses. At 15, he left Chittoor to study at Santiniketan. India was still under British rule, but Santiniketan’s artistic environs spelt freedom for the boy. It was here that Nandalal Bose—fondly called Mastermoshai by his students—took him under his tutelage. This experience left a lasting influence on Reddy’s artistic vision. Bose enlightened him about nature and instilled in him new ways of looking at it. Reddy recalled this incident in an interview: “One day, I was drawing a flower on a tree. Mastermoshai, who was passing by, saw me and said, ‘How do you feel?’ I said, ‘I am trying to learn the way the petals are arranged.’ He nodded and said, ‘Maybe the flower is refusing you. If you persist, maybe after a few days it will say, ‘Come along with me.’ If you are willing it may accept you in its shade and may even let you walk in.’ I realised I was consumed by the superficial beauty of the flower. It was Mastermoshai who helped me discover the depths of nature.” When reminded of Santiniketan, Reddy tells me over telephone from New York, “It was a divine place, the place where I learnt the most about life and art. Santiniketan was home, just as Chittoor.”

While a Van Goghesque sensitivity to nature dictates his creative process, his work has a feel of pre-historic cave engravings. He doesn’t paint but makes prints, a process that is not as famous and widespread as the traditional methods of oil painting. Unlike painting on canvas or paper, printmaking involves a more laborious and complex process whereby the artist makes use of plates, carves out his images on it and reproduces it on paper through layers of ink. Printmakers cherish this technique because of the greater effort involved. Exploring the subterranean and organic patterns of nature, Reddy’s abstract images contain multiple meanings, and it is quite possible that these meanings may be lost on you at first viewing. But when you return to them, you discover newer aspects to them. These are infused with spiritual and existential energy but Reddy maintains that they are not too complex to understand.

In his etchings and prints, he focuses on one subject of nature at a time. If it’s a plant, it will be captured in all its botanical glory, complete with cells and roots. It is treated, as it must, as a living and breathing creature. This makes him a rather sensitive artist, one with a profound sense of humanity. Likewise, a fish in a Reddy print is a force of energy. Drawing from his childhood memory of a pond full of water lilies in his village, he mounted a full series on the subject. As a draughtsman, he takes the longer route rather than any quick-fix, studying his subjects and their anatomies in detail. The objects at the heart of his prints take you through their inner structure instead of upper texture, and here again, he reiterates what Mastermoshai taught him nearly half a century ago: “Don’t go for the superficial; look for depth.”

In his later works, he became preoccupied with the theme of the circus. He printed with fervour the imagery of clowns, in various postures and formations. The idea of doing a series on clowns struck him when he took his daughter Apu to a circus. Like Chaplin, he discerned in the clown melancholy and despair. “A clown has a tremendous impact on man from childhood without us even realising it,” says Reddy. The circus was to change his life and thinking. When he returned home from the circus, he decided to capture that image in his mind for posterity. Soon he found himself in his studio, making plates to execute his vision. In hindsight, he feels there is a clown in all of us. “We are half-clowns. I should say so because we laugh, we give, we want to create, we want to make others smile. The human being is so intelligent. He wants to give much more, but he is being suppressed. We are taught that giving is something dangerous.”

But his concerns are not about natural processes alone. Every once in a while, when any social issue bothers him and he feels the need to voice it through his work, he does so without fear or favour. In 1968, the student sit-ins in Paris caused him to stage his own protest, a tribute, through a print titled Demonstrators. But nothing could compare with the Bengal famine of 1943. At the time, Nandalal Bose, disturbed by so many deaths around him, sent him and other students to volunteer. Reddy’s reaction to the tragedy can be found in a series of potent ink drawings that he did as a way of extending, from one man to another, his deeply-felt sympathies. These became some of the most important drawings of his career. Drawing is at the core of his life even today. His sketches—standalone or preparatory—are made with a loose hand, without details but they capture gestures and movements arrestingly. “I draw all the time. It’s the lifeline of art,” he says.

The wanderer in him drove him to distant moorings. In the 50s, when abstract expressionism was in the air, Reddy left for England and worked with sculptor Henry Moore. What he calls his “romantic drive” took him to Atelier 17 in Paris, and it was here, in this artistic hub for international students, that he found his voice—in printmaking. He thinks himself lucky to have interacted with great sculptors like Constantin Brâncus,  i and Alberto Giacometti in Paris of the early 50s. Brâncus,  i had returned from India and he often met Reddy on Sundays to exchange views on the Indian experience. On the other hand, Giacometti was a friend and they spent hours discussing art and politics at Montparnasse cafes, “until it was time to shut the cafe and we would leave, the last persons to do so”.

Meanwhile, Stanley William Hayter of Atelier 17 became Reddy’s mentor and pushed him to experiment with the possibilities of simultaneous colour printing from a single plate. This is what the artist is best known for today in European and American markets. Reddy, along with another friend, hit upon a unique method to achieve this balance of viscosity by the careful control of oil and ink components. As a kid, he played with pigments of coloured powders, something that came in handy later in life.

“In painting, you can paint several colours at a time but not in printing. If you want 20 plates to come together, it takes the whole day just for one print. To do more such prints, you have to repeat the process again and again and it can be very time consuming,” he says.

Reddy toyed with this method further when he arrived in New York in 1974 and took up teaching to pass on the knowledge. Because Bose and Hayter had been good teachers to him, he understood the importance of good teaching. “A teacher is not a school teacher alone; teaching is a bigger idea. A teacher is full of curiosity and willing to learn as much as s/he is willing to teach. I think it helps being a working artist to be a teacher,” he says.

Traditionally, printmaking has never been accorded the kind of respect and acceptance that oil painting has. This, in his words, is because the images of the latter are reproducible. Also, prints don’t fetch as much as paintings in the Indian market for that very reason. When Reddy held a first-ever exhibition of his works in Delhi a few months ago, its poor response caused his wife Judith Blum to declare: “In India, there is little or absolutely no interest in printmaking at all.”

Yet, for all of this, printmaking is where Reddy’s heart is. At 87, he pines for India more than ever before. Although geographically he has been away from his original homeland for more than 50 years now, he carries his memories with him. “India means everything to me. It is reflected in my work. It’s a part of me and I carry it with me everywhere I go.”