Jewel of the East

The British love affair with Indian royalty continues. But in an elaborate exhibition beginning this week, the V&A Museum hopes to dispel the stereotype of the maharaja. 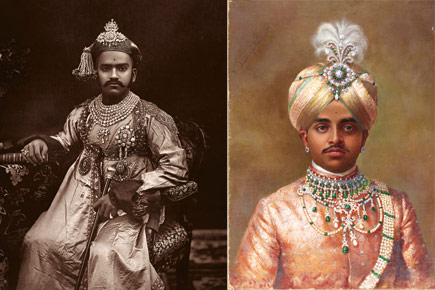 The British love affair with Indian royalty continues. But a V&A Museum exhibition hopes to dispel the stereotype of the maharaja.


The Indian royalty bug bites Britain yet again. Coinciding with the Diwali week in October, the Victoria and Albert Museum in London is hosting an exhibition on the ‘splendour of India’s royal courts’. The idea is to rip through the stereotype of an Indian prince as a lavishly dressed and bejewelled person obsessed with amassing symbols of power and wealth, and understand how the prince exercised rajdharma (the art of kingship).

On display will be around 250 royal objects from the erstwhile royal houses of Jodhpur, Udaipur, Bikaner, Baroda, Gwalior and Kapurthala, as well as V&A’s own collections and borrowings from private and public collections in the UK, continental Europe, Qatar and the United States.

Says Anna Jackson, deputy keeper of the V&A’s Asian Department and curator of the exhibition, “Actually, although there have been excellent exhibitions on Indian art and culture, and about specific subjects such as paintings, there has never been a major exhibition about the maharajas, despite the spectacular objects created under their patronage. People in Britain know something about the Mughals and perhaps about the Raj, but the story of India’s kings is often marginalised or reduced to a stereotype. We want to redress that balance and re-examine the world of the maharajas.”

In keeping with the theme, the V&A is advertising the exhibition as much more than a display of royal treasures. “It examines the changing role of the maharajas within a social and historical context and reveals how their patronage of the arts, both in India and Europe, resulted in splendid and beautiful objects symbolic of royal status, power and identity. The heyday of the maharajas began in earnest after the collapse of the Mughal empire in the early 18th century. The exhibition will open with this period of chaos and adventure and will close at the end of British rule in 1947, when Indian princes acceded their territories into the modern states of India and Pakistan.”

The royal objects on display will also reflect the relationship between the Indian princes and the then British rulers of India, which resulted in the former’s exposure to the West, leading to their patronage of European firms for commissioning objects of art and jewellery.

Jackson met the erstwhile princes in person to persuade them to lend some of these objects. “We have been delighted, and very grateful, for the great generosity shown us by royal families in India who, for the most part, have lent us objects that have never before left their city of origin. We needed to persuade them that their objects would be safe with us—not only physically safe, but intellectually safe—and that we were presenting an interesting history and one that did justice to their heritage.”

Prime among them—never on display before in the UK—is the famed Patiala necklace. Made by Cartier for the Maharaja of Patiala in 1928, the necklace features five rows of diamond-encrusted platinum chains and oversized gems. The original Patiala necklace, according to Cartier, had 2,930 diamonds and weighed almost 1,000 carats. It included as its centrepiece the famous De Beers diamond, a pale yellow diamond weighing 234.69 carats and said to be the seventh largest polished diamond in the world, nearly as big as a golf ball. What happened with the necklace is a long story but to cut it short, the original platinum chains sans the jewels were found in London in 1998 and bought by Cartier and restored using substitute gems.

The first-time exhibits also include European avant-garde furniture of the 1930s, such as from the House of Indore, and designs of a modern-style palace commissioned by the Maharaja of Jodhpur. Also displayed will be a 19th century howdah from the Mehrangarh Museum Trust, saris commissioned from European designers, European cars, including the ubiquitous Rolls Royce, images of royalty, thrones, palanquins, jewelled weapons and paintings.

The displays have been arranged in several rooms of the V&A. The tour will begin with the display of an Indian royal procession, recreated with a life-size model elephant adorned with jewels and silk and a howdah. A few rooms will display the collected objects.

Another set of rooms will display the theme of the exhibition, with paintings, monograms and text showing the typical Indian prince not just as a ruler, but also as a religious leader, a political ruler, a military expert and patron of arts. They explain the concept of rajdharma the rulers exercised. Viewers will be acquainted with the duties of the ruler as the preserver of dharma, as the protector of the ruled, as the administer of justice, as administrator and diplomat.

Jackson says the exhibition is also an attempt make people aware of the links between the two countries and how they have strengthened in modern times. “The word ‘maharaja’ conjures up a very evocative, romantic and, in some ways, nostalgic image and I am sure that is what will lure people to the exhibition. But there is also new interest in South Asian history and culture with the rise of India as a strong economic power and I think it is important for British visitors—including those of South Asian origin—and for people in India and Pakistan to understand the political, social and cultural history of the region and the role that India’s rulers played in its development.”