For the love of common people 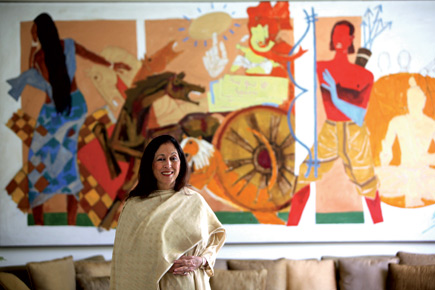 At times, a story insists upon being placed within the contexts of time and ambience; it isn’t enough to merely start where it begins and with whom. That’s why what surrounds the cream sofa on which I sit to speak with art collector and patron, Kiran Nadar, begs to be described. Each work around us is as much a part of her story as what she will tell me over the next hour or so.

A large LN Tallur piece guards the entrance to the section of her plush South Delhi house “where all the art work on display is”. Just opposite that are a series of personal photographs perched on a mantle. An FN Souza, an Amrita Sher-Gil—of elephants in a pond— flank the entrance to her office into which we are ushered. We are a tad early, and I use the few minutes we have while waiting to peer around the room. A painting from Shakti Maira’s Within series overlooks a tall standing statue of the Buddha next to a table. In the alcove on the opposite wall is an Anjolie Ela Menon painting, surrounded by books and curios. From Frederick Forsyth’s The Fist of God to tomes on Amrita Sher-Gil annotated by nephew Vivan Sundaram, to catalogues and something on alternative healing, the books are an eclectic mix. The shelves also have family photographs: of holidays, candid shots of a much-younger Kiran Nadar with her husband Shiv Nadar and his mother, a sepia-toned college snapshot of the HCL founder from his Tiruchirappalli days.

Elsewhere in the house is a very large MF Husain, and his horses look ready to spring up and gallop away in the light streaming in from the French windows close by. Ravindra Reddy’s figurative woman braids her hair on the other side of the room, while a work of Shibu Natesan overlooks smaller artefacts and more candid photos of Nadar collapsing with laughter on her husband’s shoulder, and of daughter Roshni with her mother.

That hot Delhi summer afternoon, Kiran Nadar and I sit across from a 30-odd-year-old Rameshwar Broota oil- on-canvas, “one of my earliest collections”, she says, as she explains how she turned art collector. “It was more of an accident. We were building a new home and I bought a few pieces to decorate the house,” she says. Those few pieces soon became a lot of pieces of art, and she found her wall space fast filling up. A ‘collection’ began to take shape, dominated by Indian Modernists who she has always been partial to. Nadar’s treasures include many Husains, FN Souzas, Manjit Bawas, Nasreen Mohammedis and other usual suspects among the Moderns. They grace office walls, her homes and a couple of museum spaces.

Nadar speaks of how she has refined the way she goes about collecting art. “I still buy something I like, but the overall process has changed. I look at gaps in my collection and try to fill them now.” She has a group of people who help her. Among them is Roobina Karode, chief curator at Delhi’s Kiran Nadar Museum of Art (KNMA), which she set up four years ago.

Nadar remains actively involved at the acquisition stage, though. While she is not unduly concerned about the market value of the piece she is considering, she tries to research the artist and his/her practice. Largely, it’s about the art’s intrinsic appeal. “I am a little more instinctive,” she says. Would an art critic’s opinion of an artist influence her decisions? “I go by what I like,” she says, “Though I read a critic’s opinion, I am not influenced by it.”

The art market in India has been precarious, of late; the one for contemporary art, especially moody. After the slump a few years ago, there has been little recovery, and Nadar wonders briefly if collecting contemporary art through those years might have been a bad idea. “But then, I have never looked at collecting art as an investment. Maybe the contemporary artists I have will appreciate [in value] in the coming years. These days one has to buy intelligently,” she says.

Art hasn’t been an ‘investment’ as such, but is ‘brand worthiness’, the big bucks that some artists command, an important factor? Nadar admits she has a reputation of being a big bidder at auctions, an image she’s been trying to play down. “The work is important, not the money part. It is very stressful being at auctions, but I cannot have anyone else bid for me. They will have to check with me over the phone, and that would be more stressful.”

Not just her private collection, even KNMA’s permanent collection includes ‘senior contemporary artists’ such as Amar Kanwar, Shilpa Gupta, Ranjani Shettar, Jitish Kallat, Bharti Kher and Subodh Gupta. She is picky about the younger lot in her collection. She only wants those she thinks show promise. Artists from beyond the Subcontinent don’t get a look-in either, for that’s another league altogether, Nadar says, though she picked up three Richard Mosse photographs recently. “It was a one-off purchase; I’m not looking to build a collection of works of foreign artists.”

She won’t name her favourite artist, insisting each work and every artist has a special significance. Is her husband an art enthusiast too? She shakes her head and says all he does is monitor her budget; what works she decides to collect is entirely her decision.

The KNMA was started when her walls began to get crowded and she figured it was time to throw her collection open to public viewing. Four years on, drawing people into the museum’s two spaces—on the HCL campus in Noida and the other within a plush mall in Saket—is still her biggest challenge. The art fraternity does come by, with the museum having proven itself an attraction for artists and art buffs, but getting spontaneous drop-ins by people at large is not easy—and it is their appreciation that she’s looking to arouse. We discuss art receptiveness in various metros. “In Kolkata and Mumbai, people go to museums and galleries,” she says, “In Delhi, the nature of the city is such that culture isn’t something people do.”

To change that, the KNMA periodically organises outreach programmes—talks, seminars, courses—apart from retrospectives and performance art shows. “We have programmes for school and college students to inculcate art appreciation in them,” she says.

To widen the museum’s appeal, a bigger independent space is under planning. The Shiv Nadar Foundation, which sponsors the KNMA, is currently in the process of buying land in Delhi to build a new space for it. “We want to build a ‘destination’, like the Bahai temple, where the structure itself is a destination,” says Nadar, “Museums have to be designed differently from other buildings. We will look for a foreign architect with experience in designing a museum.”

That may take three or four years to come up. For now, the KNMA within HCL’s tech park in Noida grants its visitors an intimate acquaintance with art, away from the city lights. The works currently on display here offer a contextual history of Modernism in the country. Graphite-on-paper drawings of Eve, Rain, September reclining/ standing from FN Souza’s sketchbook, vignettes from Husain’s year in Prague, and his Toys, Richard Bartholomew’s study of fellow artists Nasreen Mohammedi, Ram Kumar, Manjit Bawa and VS Gaitonde, and Madan Mahatta’s black-and-white photographs that match the modernist architecture that was shaping a new Delhi, apart from a few works of Nandalal Bose and Benode Behari Mukherjee—all these are on view as part of a show entitled An Unfinished Portrait: Vignettes from the KNMA Collection.

The show at the museum’s Saket wing is bigger. Subodh Gupta’s Line of Control, a mushroom cloud of steel utensils—his signature style—occupies the lobby outside. Inside the museum, a Nalini Malani retrospective is on. Alongside, clubbed as Is it what you think?, a show curated by Roobina Karode has works like Shilpa Gupta’s Someone Else : A Library of 100 Books Written Anonymously or Under Pseudonyms, Idris Khan’s The Devil’s Wall, Zarina Hashmi’s meditative work with paper, and other works by Rumanna Hussain, Himmat Shah, Gulam Mohammed Sheikh, Vivan Sundaram, Atul Dodiya and Shirazeh Houshiary among a total of 16 contemporary well-knowns.

While going through Sheikh’s concertina format books, I am reminded of how my conversation with Kiran Nadar ended the previous day. I had asked if she sees herself in the role of a patron to contemporary artists. Shaking her head, she said that wasn’t so; she’s not a patron of individual artists. “I see myself as a patron of the arts instead.” A regular attendee of biennales across the world, the Basel Art Fair is her next stop. She squeezes time out for many other interests as well. She is a professional bridge player, and a self- confessed sports enthusiast, regularly taking in cricket, golf and tennis. <> During the photo session, I spot a lovely photo of Shiv and Kiran Nadar’s only daughter Roshni with her young son. Does she collect too, I ask just before leaving. “No,” Nadar replies, “She buys art for her house but is not building a collection.” That, I am reminded, was exactly how she’d said she herself had started.