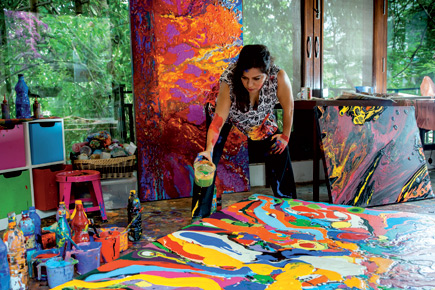 On the top floor of her Lajpat Nagar residence, Anu Malhotra has converted a spacious room next to her colourful rooftop garden into a painting studio where three Boxer dogs greet you without a bark or sense of foreboding— they approach you one by one, expecting to be petted. Even they seem to be under the spell of the splash of colours, or their smells. There are, of course, mostly bright colours: orange, green, yellow and red. “I like bright, happy colours,” Malhotra says.

Colours have always attracted her, and all the natural colours she has seen across India and elsewhere—thanks to hundreds of journeys she has undertaken as part of her work as a documentary filmmaker for decades—have inspired her to do her first art show of abstract paintings. “Be it in Rajasthani attire that is so luminous that it blinds you or those in costumes used in Theyyam or Kathakali, colours fascinate me no end,” says the well-known filmmaker widely acknowledged for popularising local destinations among Indians through documentary films Namaste India and Indian Holiday in the 1990s, especially those in the Northeast and the south.This was, of course, before Google invaded the lives of our people with close-up images of streets and MakeMyTrip began offering travel tips, flight tickets, holiday packages, hotel reservations and spawned similar websites. “Those were the times when you had no emails, no mobile phones and the only good way to learn about a place was to go there and do all the ground work without knowing what to expect,” she says, emphasising that it was under rather tough conditions that she explored Ladakh.

The seasoned filmmaker who did the first ‘Incredible India’ campaign—which has since attained legendary status as a global ad campaign to showcase the country as a tourism destination—and who was a household name as a producer of TV serials before Saas Bahu dramas rewrote the rules of the game, expects to continue with her new interest, painting. The debut show of her works, a riot of colour on canvas, is on at the Visual Arts Gallery at the India Habitat Centre from 2 September to 6 September. Malhotra intends to use the proceeds of the sales from her abstract paintings—close to 30 of them—to fund a Goa-based NGO working among the poor, Video Volunteers. Titled ‘Hue-Borne’, the show is curated by Kishore Singh. After 6 September, the show will travel to Art Alive Gallery at Panchsheel Park in Delhi.

Malhotra, who has earned a name as one of India’s best documentary filmmakers with docu-movies such as Shamans of the Himalayas, The Konyak of Nagaland, The Apatani Of Arunachal Pradesh and numerous others, says that her obsessions with colours are as old as her first memories. Daughter of an Indian Air Force officer, she has travelled and lived across the country—something that drove her to explore India much further, and make it part of her work. “All those colours I have seen on those trips have left a lasting impression,” she says referring to her abstract works. Well, her works are not entirely abstract as certain figures are visible within her paintings.

The award-winning film director, screenwriter and producer speaks about colours as though she is possessed. “Even the bougainvillea and flowers I see every day at home, carts carrying fruit and vegetables, purple mountains, colours in festivals like pooram, art forms like koodiyattam and others, including colourful homes in the south and in Goa, colours of the paddy fields, the sunset, and so on, remain great attractions to me.” Which is why she doesn’t think her new venture is too much of a departure from filmmaking. “You see a lot of colour in my home and a lot of paintings. I am very high on the design quotient. My sensibilities also extend to sets. Painting, therefore, is just an extension of play with form and colour,” declares Malhotra, who has done close to 20 promotional documentaries for the Government of India to sell the country overseas.

The paintings in her show, which are classified under categories Flow dreams; Chimera; Lei mirage; and Primal Flux, are all made using acrylic on canvas.

Malhotra , meanwhile, says she is one for the journey and not just the destination. “For me the motto is that the journey is the destination. The process is the most important thing. A lot of people are destination people, I am not. What they are missing out are those to enjoy,” she says, adding that she is bewitched by shamans. “They are there across the country, in almost all cultures. It is just that not all of us know about them,” she avers. She had previously explained it extensively in an interview to Blouinartinfo, saying, “Shamanism is an ancient methodology that predates all known religions, psychologies and philosophies. The term ‘shaman’ itself comes from the Eveni language of Siberia and means ‘the one who knows’. Other general words for shaman are the Finnish ‘tietaja’, Japanese ‘munusu’, Bella Coola ‘kusiut’, Nahuatl ‘tlamatiquetl’, and Quichua ‘yachaj’. In India, shamans have existed since ancient times and still do: Himachali gurs, Sikkimese jhankris, Arunachal Pradeshi nyubus and bhagats of Bihar et al. In fact, even today, India has living traditions and religious practices that have ancient shamanic roots. One of the remarkable things about shamanic assumptions and methods is that they are very similar in widely separated parts of the world including such regions as aboriginal Australia, native North and South America, Siberia, Central and South East Asia, North Europe, and South Africa.”

From chasing shamans to courting royals and exploring forests to taking in festivals, Malhotra has a favourite preoccupation: colours. This show is a testament to her obsession.

(‘Hue-Borne’ is on at the India Habitat Centre till 6 September; it will then be on display at Art Alive gallery in Panchsheel Park from 8 September till month-end)