Lady Gaga speaking to me after she hatched out of an egg, Jay Leno calling me pretty, and other Grammy tales from LA 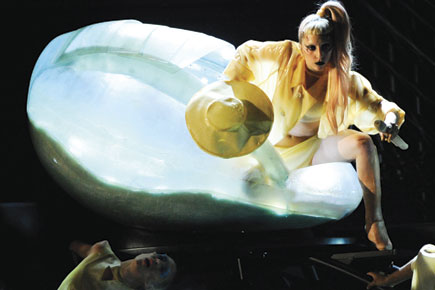 Lady Gaga speaking to me after she hatched out of an egg, Jay Leno calling me pretty, and other Grammy tales from LA


My first night in in LA, I hit a whisky bar called Seven Grand, to shoot with a man who’s won six  Grammys and is up for his seventh—Kevin ‘Brandino’ Brandon, who has worked with Justin Timberlake, Mary J Blige and Outkast, not to mention the real old school jazz icons, and is yet practically unknown. Locals walk in for the live music, don’t know his story, ask me what the deal is, why we’re shooting here…and then ooh and aah.

It’s all about what’s on show, after all, and this is the US, so some of those tiresome stereotypes persist. An ageing rock star tells me how good my English is, and another engages me in the strangest possible conversation on India’s “atrocious living conditions” and why toilet paper has never caught on.

I’m in good spirits, though, as I meet some people who just don’t seem very LA—Pedro calls himself a ‘spirit guide’ at the bar, but he’s also a yoga teacher, musician and actor, working with Tim Robbins’ theatre group—it’s fascinating, and the fact that he grew up in a commune has me listening, eyes-like-saucers. Twenty-six-year-old Justin Kirk, the music curator, seems well-travelled, and also plays the trombone in a band. The first night, I’m having the sort of encounter I was told would never happen in Los Angeles. It’s hard for the rest of the city to match up.

We’re here to cover the Grammys, though, so naturally I’m channelling Shakespeare—all the world’s a stage. “This is all so surreal, I don’t know what to tell people when they ask if I’ve seen the real LA,” I’m telling one of our CNN-IBN crew as we take in the entire red carpet extravaganza the day of the actual awards.

“Trust me, you don’t want to see the real LA,” a cameraperson with CNN tells me, shaking his head.

All the media crews are at the venue hours before the celebrities, setting up equipment—the recces having been done a day before. It’s glitzy and showbiz, but you’d never guess the red carpet is in a massive tent. There are honest-to-God chandeliers, and golden mini-gramophones in cases being shined up, hours before the celebrities sashay down. It’s an interesting place, this LA—the men are also all made-up, fake tans in place (you can’t help notice the stars from Jersey Shore).

After agonising over appropriate red carpet wear, I’m at the spot designated for us in the international media section, on a small step in front of the partition separating the camera crews. I keep craning my neck to see who’s walking down the carpet. We have a crew from China on our left, who smile at everyone while breaking all the rules, crashing into our frame and embodying the obnoxious broadcast journalist stereotype. They also think that Barry Manilow is Rod Stewart, which I find hilarious in itself.

It starts off all civilised, with agents and publicists making their way down the aisle to see who their clients should be talking to. The less-known names go first, but since you never know when someone will explode into the stratosphere, I tread a fine line, saying ‘yes’ to some, keeping an eye out for the big guns… I give up all delusions of normalcy and start yelling out, “Talk to Indiaaaa” as the super celebs walk by.

The Kings of Leon are being rushed to the photo-op area, but that’s what works—I get the drummer, Nathan Followill, still nursing a shoulder surgery. He says that they’re finally in a position to be able to pick and choose where they can go perform, and India is on that list.

Katie Perry compliments the Chinese journalist on her dress. All she has for me as she glides down with her massive train, is “Namaste India, I love you,” or some such beamingly adorable phrase. Her husband Russell Brand is hilarious—cornered by us and the Chinese contingent, he plays us off against each other, saying “I love China,” and then, “I love India.”

So much is lost in translation.

I get Dominic Monaghan of The Lord of the Rings and Lost who also features in the video of Eminem and Rihanna’s Love the Way You Lie, but I’m confused about why he’s here at the Grammys. He says something about the music, and how this sort of spectacle is an excuse to “dress up in style”—I get the sense that he doesn’t take it seriously.

As I look down this elaborate hall, it’s hard to tell if anyone even sees the humour in this—it’s all make-believe, I want to yell. Perhaps no one understands that better than Lady Gaga, borne in her egg on a palanquin: she later says she was in there for three days. It hatches on stage… her re-birth
is complete.

The most charming of the lot is Ricky Martin. The crew from Telemundo, Mexico, to my right, tell me that he visits India regularly, and is a Sai Baba devotee. He does a namaste and says he loves India too. In this sort of atmosphere it feels just plain wrong to ask what exactly it is they love, so I stay quiet and bask in the reflected glow of celebrity, an inane smile on my face.

Now I’ve always been a fan of the Grammys—I love the song and dance. But over the past few years, I’ve noticed my attention waning—the show never seemed entirely up to the mark. Not so this year: either it was those VIP tickets, or just seeing Arcade Fire, Lady Antebellum, Eminem with Rihanna and then Dr Dre live.  Whatever’s your scene—if not Justin Bieber with Jaden Smith or Usher, then maybe Mick Jagger—there’s something about live music. I loved it, and completely understand why they call it “Music’s biggest night” (that’s trade-marked, by the way).

The proverbial icing: an exclusive interview with Lady Gaga, right after her spot on the Jay Leno show. Leno tells us his wife has just come back from India and loves it. When I tell him he has to do his ‘Jaywalking’ in Delhi or Bombay, he laughs. “No, but Indians are smarter… not as dumb as Americans,” he says, happily posing for the pictures we want. I tell a friend Leno said I was very pretty—and get a mail back that there can be no ‘higher spiritual validation than this’ that my life is made for satire.

Maybe so, but nothing could be more satirical than meeting Lady Gaga. And yet, she’s so normal, if you overlook the prosthetics on her face. She’s calm, restrained, and it feels like she’s in total control of what she says and emotes, as well as her image. She has definite presence: I can’t quite believe she’s only 24. I do ask her the Madonna question (she calls her the Queen, saying she’s given her blessing for Gaga’s latest hit, Born This Way), but can’t help but think back to when I was watching Madonna on Letterman on TV a while ago—she seemed more than a little stoned and giggly. Gaga’s the opposite. She’s on the ball and definitely sharper than people give her credit for.

Amrita Tripathi covered the Grammys for CNN-IBN and VH1 India. Her debut novel Broken News is in stores now 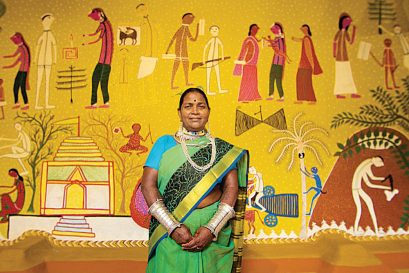 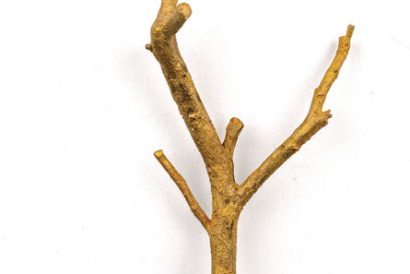 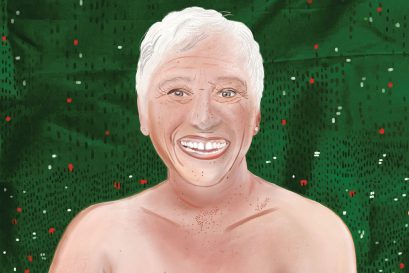