The director of Finding Fanny breaks out of the indie straitjacket. The auteur on his passions and projects 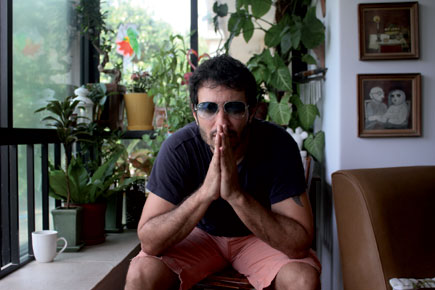 The director of Finding Fanny breaks out of the indie straitjacket. The auteur on his passions and projects

Nine years ago, Homi Adajania went into various art deco theatres around the world lugging six film reels of his debut film Being Cyrus. He patiently responded to many tangential questions about the film’s philosophy. “Everyone from critics to film school pass-outs raved about Being Cyrus, but it did not make me a penny,” says Adajania.

With his second film Cocktail, the conversation changed, and he found he had to defend himself. He was accused of selling his soul to money magnets who fund Bollywood’s big-budget song-and-dance dramas. “Well, if it were up to me, Cocktail would be about sex, drugs and girl-on-girl action. But they called me a misogynist because my protagonist Veronica starts wearing dupattas to please the man she loves.”

Now with his third and latest, Finding Fanny, Homi finally hopes to have struck a balance between telling the stories he really wants to and keeping his producers safe. “Our parties cost the most. Every five days, we’d go wild in Goa. But I think my producer Dinesh Vijan may not have to sell his flat after all,” he says with a smile.

Dressed in a plain T-shirt and shorts, sipping his morning cup of sugarless coffee, Adajania seems more at ease this time than during the release of his last film. A bit sleepy from the night before, he makes a little fuss over being photographed with baggy eyes, but soon accedes. “Look at this view… would you feel like working with a view like this?” he says, watching the sun from his sea-facing Breach Candy apartment in South Mumbai. “You did not like the film?” he suddenly asks, to which the only confession I can make is that I’d accidentally seen a Hindi version of it. “Go watch the English one. The syntax of the film isn’t in Hindi!” he says, almost sounding a bit offended.

“I feel like I’ve come back home with Fanny,” he says of the 102-minute long English/Hindi satire about five eccentric Goans in search of a woman named Stephanie that’s most unlike Bollywood in terms of treatment and storytelling. Even then, the film has worked well with the multiplex audience, which is unusual for a quirky film like this.

Few filmmakers have had the courage to explore the indie, as Adajania did with his very first film. Being Cyrus was a non-Hindi psychological thriller, perhaps one of the best to come out of India in many years. After succumbing to some stereotypes in his second film Cocktail, it seems he is back to telling a story exactly the way he wants. “When I made Cyrus, I did not know how to make a film. With Cocktail, I wanted to see if I could deal with the naach-gaana narrative format. But with Fanny, we were fearless. There were really no boundaries.” He deals with farce this time, but leaves many loose ends. Incomplete conversations and undecided motives are elements splashed all over his canvas. Nor are the characters the kind you’d relate with or look up to. It’s the absurdity that seems to have stayed with filmgoers. “Aren’t we all a little eccentric? I just think human beings are very bizarre, complexed, screwed up. I wanted the eccentricity to be the predominant feature in them, but then you slowly see why they are the way they are. Won’t it be too boring if we all agree on everything?”

For the kind of life he has led, Homi Adajania may as well be a happier mash-up of characters in Finding Fanny. The only difference is that his road trips were way longer and he wasn’t looking for anything in particular. The first and only filmmaker in the Adajania family, he discovered his penchant for quirky stories early in life. Though an avid-reader, academics was never his calling. “During graduation I got thrown out of English Literature in St Xavier’s due to lack of attendance, though I somehow managed to finish it.” For over a decade, he let himself loose as a wanderer, travelling across the globe, letting stories happen to him—all this on a shoestring and a smile. “People thought it wasn’t possible to travel the way I did, but it really was. After my father passed away, for one year I sat at the petrol pump in a red light area and made sure my mum got her monthly income. Then I said I can’t do it. It was too non-creative for me. Instead I let wanderlust get the better of me.” From getting drugged by Albanian refugees to getting deported from Nepal to taking a fake fair to Venice, every trip gave him fresh stories to tell.

Much like his father, whom he calls the most passionate storyteller he’s ever known. “My father used to travel six months a year as part of the jury for the World Boxing Federation. When he’d return, my sister and I would wait to hear the stories he came back with.” Evenings spent with his father narrating one fascinating travel tale after another are too many to choose from. “He once spoke about a time when he was at a stadium in Cuba and Fidel Castro was there too. A guy came into the stadium and blew himself up right there. A referee sitting next to my dad lost his right leg. When he was in South Korea, he saw people pull out a snake’s beating heart with chopsticks and eat it. He was in the army for a while and he’d tell us war stories. Now these were bizarre stories for a child to hear. We were just awestruck.” His father taught him to cherish and add colour to memories that would eventually fade and fluctuate. “It was because of him that I grew up to tell stories.”

It wasn’t long after his dad passed away that Adajania started to get restless. “When the travel bug bites you, it bites you hard. You want unfamiliarity, the unknown, the unpredictability of what’s round the corner.” He wandered aimlessly with as less as $25 in his pocket. He met fellow travellers who became friends as instantly as they disappeared from his life. “I once spent three days with this French bar girl who couldn’t speak an iota of English. You can guess what we did the whole time!”

He recalls how his then girlfriend and now wife Anaita Shroff Adajania once reprimanded him for disappearing on her for five months straight. “I always had her to come back to. She was the one constant in my life. That’s I why never really fell in love during these trips.” It’s these experiences he’d never trade for anything. “Today I can’t travel the way I did. I wouldn’t be able to sleep on the sidewalks of Athens at 43.”

By his own admission, he made Cocktail to fund his next trip as a professional diver. “Dinoo [Vijan] once told me, ‘Why be stuck on one island all your life, when you can make a movie and go diving all over the world?’” Just before he started shooting Fanny, he went on a diving escapade to Ecuador where he almost lost his life. “Our boat crashed in to the rocks and sank on the last night of our trip. I remember I was so happy to be alive. I was diving with marine iguanas, penguins, seals, and I was happy that I lived to share it.”

Back in Bollywood, Homi Adajania is the guy who writes letters to himself to be read 10 years from now. He’s the writer who talks easily about an unpublished book. He’s the director who pens personalised welcome notes to his cast members before they start shooting. For Deepika he wrote: ‘Welcome to Goa, home to spectacular beaches, bootlegged booze and certain beatific bafoons. While you’re here we cannot promise you the beaches and the booze, but the buffoonery, why, the minute you spout your lines you’ll fit right in!’

The next one year of his life has been mapped out. He will be directing the Hindi adaptation of John Green’s The Fault In Our Stars, but he’s also helming his good friend and producer Dinesh Vijan’s next project and gearing up to shoot a women’s empowerment video with Deepika Padukone. “I’m shooting a video where women from all walks of life are just freewheeling, doing their thing. The message the video will highlight is [that] the only choice a woman wants is [one] of equality. And Deepika will be just another girl in the video.”

Adajania is also awaiting the release of a fresh cut of Finding Fanny in the overseas market, one that hasn’t been butchered by the censors. “Yes, this one thankfully does have that beautiful shot of Deepika’s bare back! It’s minus all the gags. Dimple’s dress doesn’t tear. Pankaj doesn’t go ballistic over her bosom. Basically all the loud stuff has been removed. I think it’s like a documentary, but it worked with the focus groups.”

With time, he hopes Indian filmmakers won’t have to fight the censors at the word go. “When people like a film like Finding Fanny, it gives a huge group of potential filmmakers that hope. We don’t have to start thwarting our sensibilities to adjust to a specific mindset. I think there will come a time when it’ll be okay to say ‘virgin’ without a thousand eyebrows rising.”

His two-year-old son Zane runs into his father’s arms, looking wide-eyed at the camera that’s capturing his pictures. “Life is a passion, it’s a full time job. My first film had both Xerxes the evil conqueror and Cyrus the benevolent king. Whatever you do, however you find your path, just be happy.”