A Love Story With a Difference

Indian writing in English rarely ever matches the gems of vernacular literature, such as this Marathi novel 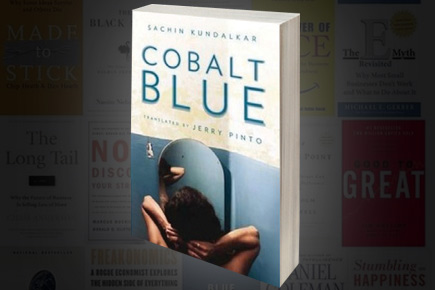 Indian writing in English rarely ever matches the gems of vernacular literature, such as this Marathi novel


Cobalt Blue is the kind of book that affirms why literary fiction in Indian English is a shadow of what vernacular literature has been churning out with such finesse (and so little profit) for decades. It is a book with the barest of plots and one grand ambitious idea. That is a formula Indian English writing is adept at, but which inevitably ends up being self indulgent. But Sachin Kundalkar, the author of Cobalt Blue, creates something extraordinary out of what appears to be outlandish.

The book is about two people—Tanay and his sister Anuja—who have a secret relationship with the same man, the paying guest in their home. In the first half of the book, Tanay remembers his betrayal, and in the second, Anuja. Like all good novels, it is hard to pinpoint why it works. The peculiar situation is fertile for twists and turns, but there is none. It is just two failed relationships and both happen in a bubble ostensibly untouched by the other. The man they both fall in love with does not even have a name. From the memories of Tanay and Anuja, he appears in part scarred and in part enlightened; in part free of emotional trappings and in part so afraid of it that he always has to run away. One way of understanding this book is as two character sketches of the same man. And both sketches are wrong because neither Tanay nor Anuja really understands why he left them.

Their family is a regular conservative Maharashtrian one living in a city. Tanay is a homosexual who after casual encounters thinks the paying guest is the permanent relationship he is looking for. Anuja is free-spirited and aggressive. She coaxes her lover to run away with her. It is only after their elopement that Tanay realises that he was being cheated on with his own sister. Kundalkar creates in Tanay a deeply tragic character. While the family is crushed by Anuja’s act, Tanay grieves his own loss alone. When Anuja, heartbroken, depressed and suicidal, returns to the shelter of the family she had contempt for, Tanay has to live with the trauma of facing the woman his lover ran away with. In the end, both separately escape the family. Except for a vague hint in one line, it is never revealed whether Anuja knew of her brother’s relationship.

Kundalkar writes with abandon. When Tanay or Anuja is remembering, time flits between the past, present and future without warning. Paragraphs change and only after a couple of lines do you realise that the writer has moved on. Often, the same line is repeated deliberately, a trick of poets. But the writing is not lyrical. It is dead-tone narration with the occasional rare flourish—‘Then you turned over again and once more I could see your face. I looked at you and I could do nothing.’

Kundalkar was 22 when he wrote this book and some of it is evident in the overdoing of a few things. Tanay’s half of the book is straight narration from memory. Anuja’s is in the form of a diary which, as far as you can tell, seems an indulgence. In one place, the writer throws in a few lines of a waiter who won’t find work because the Irani restaurant is becoming a McDonald’s. It’s a lonely half-political point that is neither here nor there. The paying guest is a character who seems too surreal to be real, but that is probably intended. But when the writer gets into details every once in a while, it doesn’t work. These lines of Tanay talking about his lover’s childhood—‘Your memories as an eight-year-old: the Eiffel tower by night, sunlight until eight in the evening, and a variety of exciting cheeses’—are not the memory of an eight-year-old, but of a tourist.

These are quibbles over details. The writer does not stay anywhere long enough for anything to jar. For someone who has not read the original, it is impossible to say how much the translator’s contribution is to the English edition. But if the final output is any indication, in a country bereft of translators of merit, Jerry Pinto deserves some credit for an unusual and fine work of art.