The Revival of Indian Hockey 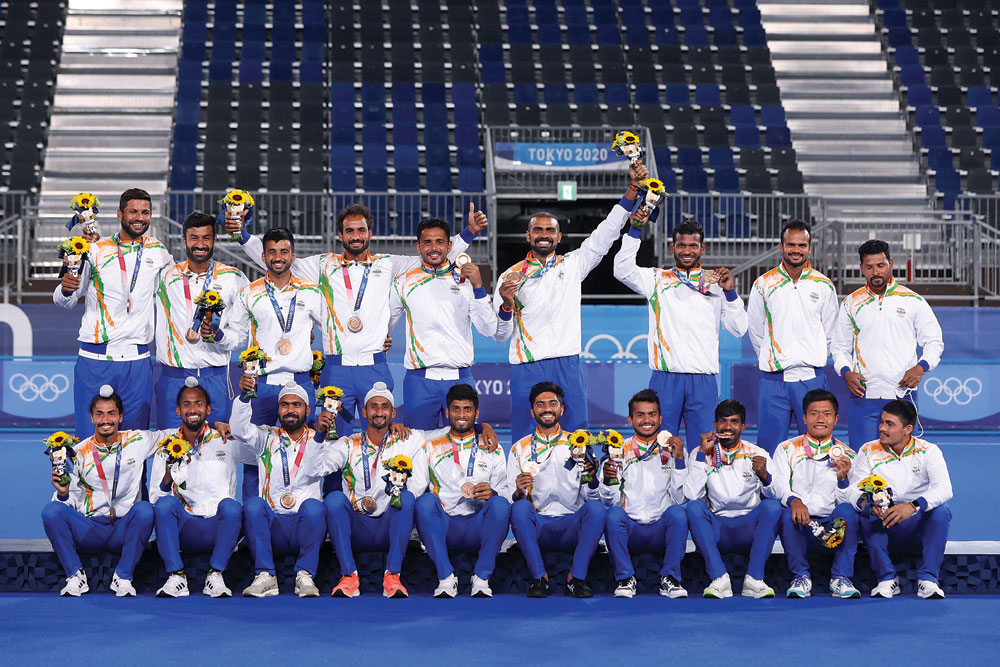 
ON AUGUST 5TH, Manpreet Singh and company overcame four decades of historical baggage, pres•sures as much of the mind as that of skill, to come back from a two-goal deficit to beat Germany 5-4 in a thrilling encounter at the Tokyo Olympics. The win ended Indian hockey’s 41-year-old drought at the Olympics. It won a bronze. But its weight felt every bit as much as that of gold.

Just a day before, Indian hockey’s female contingent made history by entering their first hockey semifinal. They may have lost that match, but they will get one more stab, like their male counterparts, at winning a bronze on August 6th.

“Revival” is a term that has been used frequently over the last few decades, as much hype as fervent prayer. But the achievements of the two squads at Tokyo this time, their attacking style of play, their fearlessness and refusal to crumble under the weight of history, shows that Indian hockey is breathing again. After a golden era—where they won six consecutive Olympic gold medals, and then again another gold in 1964, a silver and a couple of bronzes, and one more gold in a depleted field in 1980—came the long punishing drought. It wasn’t a decline as much as a jump to death from a skyscraper. It was caused as much by external circumstances—the change from grass to artificial turf and rule changes making fitness and speed integral to modern hockey, the dribbling and control skills not so much—as India’s own doing. There was an inability to move with the changing times; sport administrators’ apathy and short-sightedness, corrup•tion and in-team politics. Players were dropped unceremoniously, coaches changed frequently. When the current coach Graham Reid was appointed, he was the eighth coach in less than 10 years.

Every four years in the last four decades, Indian players have shown up at the Olympics’ astro turf (even failing to qualify once at the 2008 Beijing edition) and just crumbled un•der the weight of its history. But not this time with Manpreet Singh, Rani Rampal and their two teams.

The revival was not achieved in a few weeks at Tokyo. There was no real turnaround moment. The groundwork was being laid for years now. From the 2016 edition, where they entered the Olympics ranked No 13 and yet managed to make it to the quarterfinals, to this current edition, where they entered with a No 4 rank, and went one up better than their 2016 journey, entering the semifinals and winning a bronze. Prior to this edition, they have been doing all the right things leading to this event: winning the 2017 Asia Cup, the 2019 FIH Series Final, sharing the 2018 Asian Champions Trophy, and making it to the 2018 FIH Men’s World Cup quarterfinals.

What has helped is the experience of working under a stream of top quality international coaches, from Terry Walsh and Roelant Oltmans, and now Reid for the men. These coaches have introduced a new attacking style of play built on speed and strength, and introduced a new culture of team spirit and self-belief. Like all modern sports, the Indian team now travels with a staff of psychologists and trainers, nutritionists, scientific advisors, physios and video analysts. The women’s squad has also benefit•ted from such an approach, from Harendra Singh as coach, who after helping the Indian men’s side to the 2016 Junior World Cup, guided the women’s team win the 2017 Asia Cup (and later, worked with the men’s squad), the Australian Neil Hawgood, to the current coaching staff led by Sjoerd Marijne and the analytical coach Janneke Schopman, both from the Netherlands.

If one looks at the matches played, the Indians were as fast and strong as any of their competitors. The men’s team played eight matches under hot and humid conditions in just 13 days with no dent on their energy. There were no superstars with an outsized influence within the team either. In fact, some eyebrows were raised when the squad was first announced, since a few seniors had been left out and 12 out of the final 18 were going to be playing at the Olympics for the first time. The faith put in Reid, who in turn put his faith in this fairly young squad, has now paid off. Every time the team was un•der some strain or a goal or two behind, barring that Australia match, they proved adept at finding the equaliser. In fact, Reid has transformed this team into a hungry goal machine. India averaged more than three goals per match through this edition, scoring 25 goals in just eight matches.

If the men contended with the weight of their legacy, the women’s side was fighting dismissiveness. Very few believed they would get very far in this edition. They had not won a single game in the last edition at Rio, and before that failed to even qualify for the London edition. Even this time, they had begun quite frightfully, losing three straight games in the group stage and were nearly out of contention.

But when it mattered the most, they pulled off one of the biggest upsets in modern hockey to beat the mighty Australian team.

This enthusiasm about Indian hockey’s revival would of course not have been there had the men’s team failed to win the match against Germany. In the dying stages of the match when the Germans were running through the Indian defence to find the equaliser and the Indians just barely managing to stay ahead, the Indians conceded a penalty corner with just six seconds left on the clock. A disquieting familiar pattern appeared to have raised its head. Throughout the tournament, while the Indians have exhibited blinding speed, there have been moments when shades of the hockey of the last four decades reappeared, like in the match where Australia blanked India out 7-1. The team then made an improbable comeback, losing narrowly against Belgium in the semis.

In the past, Indian teams have conceded goals at the death, like the time Malaysian teams scored penalties in the 2010 and 2018 Asian Games, or the time in 2000, when India was on the verge of making the Olympics semifinal with a 1-0 lead over Poland, only to have the Poles score an equaliser in the final moments, and, with the match drawn, allowed another team from the group, Korea, who had beaten India earlier through to the next round. Was this Olympics, with the pen•alty corner conceded just six seconds before the final whistle, going to be yet another so close-so far moment?

Germany took the shot, hard and flat, but the Indian goalkeeper PR Sreejesh thrust his body out just enough. India kept the lead, won the bronze and rekindled the country’s old romance with hockey.