A nation’s history through its most popular sport 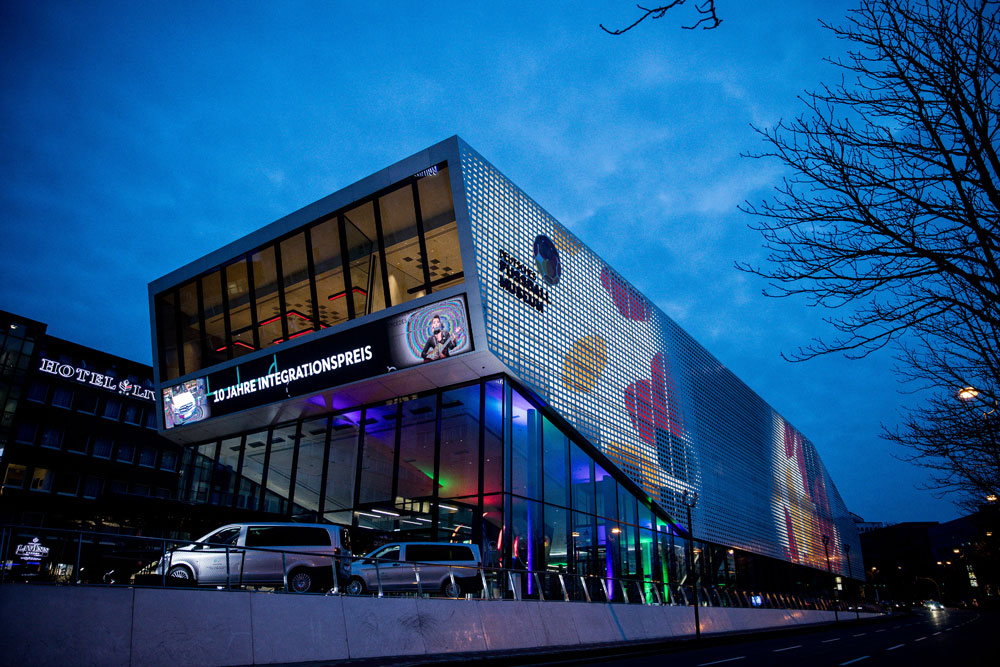 
There it was. Right in front of the U-Bahn station. “Deutsches Fußballmuseum” inscribed in black on an oddly shaped, gigantic glass and concrete building with a football in German national colours on the top adding to the signage décor. It was a warm Monday afternoon and I had just arrived at the Dortmund U-Bahn station. Despite the luggage, and my being an ardent Argentine football fan, I felt immediate excitement and made plans to visit the museum.

The multimedia museum, built as recently as 2015, is fittingly located in Dortmund, also known as the “Der Fußball Hauptstadt” (The football capital) and home to the famous German club Borussia Dortmund.

Expectedly, football, or fussball—as it is known in Germany—is the single biggest obsession among German people. Life events are recounted with references to famous matches; marriages and important family functions are planned around the football schedule; fan rivalries are legendary and are often known to affect relationships. If this seems anecdotal, consider this: Germany has 31,000 football clubs and their national football association (DFB) has more than 6.5 million members, and Bundesliga is worth more than $4 billion. In essence, football is a significant part of German culture and the game’s history is an important part of the German society’s collective memory. When thought in this context, the task and responsibility of an all-encompassing German football museum seems insurmountable.

If these musings occupied my mind at the deceptively austere ticket counter, they were soon enveloped by the simulated stadium noise accompanying the walkway to the first gallery. The awe-inducing original football from the 1954 World Cup final, signed by all the German players, stands in the centre surrounded by life-size portraits of each of the German players who played in the “Miracle of Bern”—as the final match against Hungary is popularly known. The 1954 tournament was the pivotal moment in German sporting history; the nation was recovering from the Nazi era and the devastating effects of World War II; West Germany was playing its first major tournament after the ban on Germany was lifted in 1950; the economic conditions were tough and the nation was looking for inspiration to rebuild. The player exhibits in the 1954 gallery reveal invaluable details about their life before and after the World Cup: Fritz Walter, the captain, was a prisoner of war and played in the military football club Rote Jäger, the goalkeeper Toni Turek’s POW certificate is a reminder of his time at the Eastern Front, Ottmar Walter played with grenade fragments in the knee from his time in the war. Postcards, photographs and books (Fritz Walter’s 11 rote Jäger or 11 Red Hunters, Helmut Rahn’s Mein Hobby: Tore schießen or My Hobby: Scoring Goals) exhibited here tell us how these legends went on to become furniture salesmen, owners of petrol stations and lottery outlets, city council members, etc. Displays such as the helmet gifted by the vehicle manufacturer Glas to the team after the tournament hark back to a time when the game was not as economically viable as today. The exhibit of the essay handwritten by a school student is a testimony to the huge cultural impact of the World Cup win. Then there is the narrative of the final match itself—Hungary had not lost a match for four-and-a-half years and had defeated Germany 8-3 in the group stages. But it rained on the day of the final. The Germans knew that rainy weather is Fritz Walter wetter. The moments from the final are best enjoyed through the video footage playing in an old 1950s television set—the 1954 World Cup was the first televised football tournament—synced to the famous radio commentary of Herbert Zimmermann. The back of the seat and a brick salvaged from the Wankdorf Stadium at Bern, the left boot of the forward Helmut Rahn (known popularly as “The Boss”) with which he scored the winning goal, add tangibility to the emotional high of reliving this great sporting moment.


The impact and influence of the 1954 World Cup win on the German psyche lasts till this day. While I was soaking in the details from the 1947 official clearance certificate (from participating in the Nazi crimes) given to the coach Sepp Herberger, I found some of the elderly visitors excitedly narrating stories of the match to their co-travellers. The legend of Sepp Herberger, the famous German who coached the national team from 1936-42 and post-war from 1950 to 1964, is deservedly hosted in a dedicated section. On display are pages from his notebooks depicting game strategies, team line-ups, physical exercise schedule for players, his whistle used in training, photographs featuring tactical meetings, his typewriter and, most importantly, details of his correspondence with Adolf Dassler—the founder of Adidas. Dassler famously provided the German players with light-weight shoes fitted with removable studs—he designed different studs for different weather conditions—for the 1954 World Cup, which gave them a clear advantage over other teams. Especially in the final against Hungary.

After the emotional rollercoaster of 1954, the next section invites the visitor to learn about the history of the origins of the game with its beginning in England—there is a diary entry from October 24, 1857 revealing the formation of Sheffield FC—and the first proper German football match in 1874. Apart from diary entries and official documents about establishment of associations and rules of the game, there are also shoes on display from the early days, a replica of an old ball made using a pig’s inflated bladder and paintings depicting scenes from matches: Isaac Robert Cruikshank’s 1820’s painting Football is particularly enjoyable, for it reveals how chaotic and brawl-like early football was.

The curation intelligently uses digital interfaces and virtual reality to engage the 21st century visitor—I tried my hand (and failed. Mostly due to my inefficient German language skills) at a kiosk quiz game about coach Herberger’s strategies. The most popular of this lot seems to be a poll which asks the visitor to watch the third goal from the 1966 World Cup final (England defeated Germany 4-2) and decide if the ball was over the line or not. There are also cut-outs of newspapers which reveal the contrasting media coverages in the two countries about the controversial goal. One amusing headline on the front page of a German newspaper reads “War nicht drinn” (Wasn’t In). Another interactive display allows the visitor to trace the journey of the West German team to victory in the 1974 World Cup held in Germany. It does not fail to highlight the tension during the West Germany vs East Germany match in the group stages of the tournament. But apart from this mention, there is not much else about the East German football team that played professionally till the Berlin Wall came down in 1990.

Interweaved with giant digital displays and kiosks are physical exhibits of personal belongings of players—the Samsonite suitcase that Mats Hummels used during the 2018 World Cup in Russia, Michael Ballack’s plaster cast from his ankle injury during the 2010 World Cup signed by all his teammates, the famous No 5 shirt of Franz Beckenbauer and his numerous medals and trophies, suits given to players in 1954, the souvenir from the 1970 Mexico World Cup with the incorrectly exhibited German flag, the famous dark blue Cashmere sweater of coach Joachim Löw from the 2010 World Cup, Manuel Neuer’s goalkeeping gloves, etc. These exhibits humanise the celebrity footballers and allow the fans to experience intimacy with their sporting heroes. Of course, I had a difficult time witnessing the displays of Germany’s dominance over Argentina in the World Cups since the dreaded 1990 final. (If you can believe it, they keep replaying the video of Mario Götze’s extra time goal—known in Germany as the goal of the decade—from the 2014 World Cup final, on a giant football-shaped display, in loop.)

After spending a little more than two hours devouring football history, I assumed the usher standing at one of the doorways was manning the exit. I was wrong. She was waiting at the entrance of a theatre to hand me the VR headgear and headphones of the English translation of a virtual reality movie. The VR film attempts to bridge the gap between generations of fans and instil pride in the tradition of German football by juxtaposing younger players like Thomas Müller with earlier legends and current coaches like Joachim Löw, and with the yesteryear master tactician Sepp Herberger. This movie is a much-needed interlude for the visitors and allows them to recuperate and re-energise for the journey ahead. Yes, there is much more to experience.

For football nerds, the next section, which is approached by getting down a flight of stairs, is no less than heaven. On display here are the original trophies (FIFA World Cup and Euro) won by the German team. But more importantly, in the next room, there are answers to much asked about questions—What do the players eat? What exercise regimen do they follow? How do they recover from their injuries? How does one develop necessary skills, such as dribbling and passing? What are coaching theories of different coaches? How to mentally prepare for high pressure matches? The interactive kiosks here also reveal some incredible trivia—coach Herberger’s “stay dry during the game” rule, manager Christoph Daum asking his Leverkusen players to walk on broken glass as preparation, etc.

The next few galleries—and there are quite a few—are dedicated to professional league football with a particular focus on Bundesliga (the German Football League). Understandably, the story of Borussia Dortmund, the local football club, occupies majority space in this section. There are sophisticated interactive simulators using which I could simulate the game of my favourite players from around the world. As an icing on the cake, there is a walk through the hall of fame of world football.

This impressive museum has been carefully designed to preserve the collective memories of football lovers across generations and is an outstanding example of how popular sport can be used to tell the story of a country that has been through a lot. Interestingly, the curation does not shy away from mentioning the Nazi history or the history of the Cold War even when it concerns some of their legends, like Sepp Herberger. The experience of my visit was exhausting but also exhilarating with enough to cater to my emotional and intellectual being. It also made me wonder why we do not have a museum for a popular game like cricket in India.

Statutory warning for all football fans: Plan a full day’s visit to this mecca of German football history.