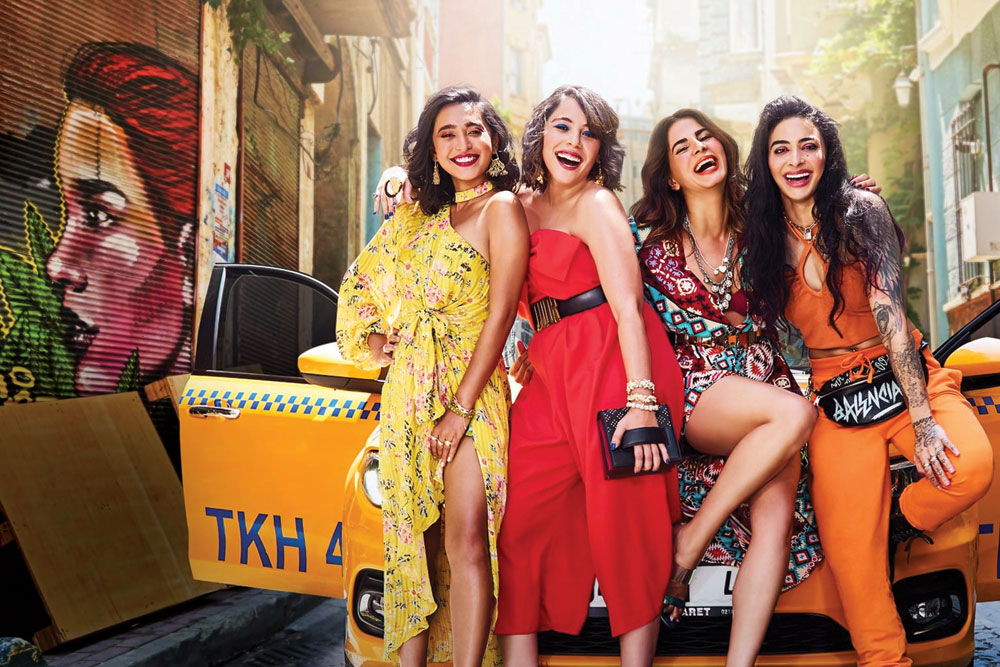 Girls grow up on rom-coms and boys grow up on porn, says Maanvi Gagroo’s Siddhi Patel. Add to that the boys’ mom obsession, she says in her avatar as stand-up comedian in Season 3 of Four More Shots Please! and you have impossible rela­tionship goals. The four leading ladies of the show spend most of this season grappling with the expectations of the men in their lives. There is Damini, (Sayani Gupta) torn between her love for nice Parsi boy and bar owner Jeh (Prateik Babbar) and her sexual anxieties caused by a miscarriage. There is Umang (Bani J), caught between two women and a man, played by Jim Sarbh as a sexu­ally mischievous Shakespearian Puck. There is Anjana Menon (Kirti Kulhari), smart lawyer, single mom, with a fatal attraction for married men, including her ex-husband. And there’s Siddhi, the eternal spoilt rich brat, recovering from both her father’s death and her mother’s well-adjusted mourning. In this show, women behave badly in public, ridiculing their friends; men can be needy and vulnerable; children can be overbearingly real; and fifty-something men and women don’t automatically lose their sex drive. This is privileged Mumbai, and given how often one sees the Sea Link, clearly on the posh side where political offsprings have plunge pools, and characters get driven around by nameless chauffeurs. Birthdays are celebrated in Italian vineyards with treasure hunts supervised by delicious-looking men; revenge is taken by destroying a man’s ultimate statement, his luxury car; and our leading ladies will do anything to have their ideal rom-com finale at an airport. There is a certain amount of pleasure in seeing gender roles being reversed. The men swoon and wait for the women to notice them. The women are usually wilfully ignorant or simply unaware of the feelings they evoke in the men. And phrases such as non-date friends and detox get­aways get thrown around enough for one to feel socially with-it. But for those looking for clues as to what women want, it is quite simple. It’s what men want as well—or should want at least. Love, companionship, understanding, and above all, equality.

Why watch it: For the easy camaraderie of the good-looking and well-groomed cast


The 1930 Hollywood movie based on Erich Maria Remarque’s 1929 epic novel was not very popular with the Nazis. The German update on the movie, which premiered at the Toronto Film Festival will not win any plaudits from today’s warmongers. The horrors of trench warfare, youth lost to thoughtless carnage, lead­ers who push on despite knowing the cost; these are elements still relevant today. Focusing on young Paul Bäumer (Felix Kammerer), the film, set in 1917, unpeels the psychological trauma visited on the young men who become cannon fodder for someone else’s pointless war. Shot in chilling dust-smeared close-ups, the slush and mud of the killing fields of Europe feel all too real, while the blue filter puts the ice in your veins.

Why watch it: To remind ourselves war is always visceral, and never an adventure