In search of the master’s mercy 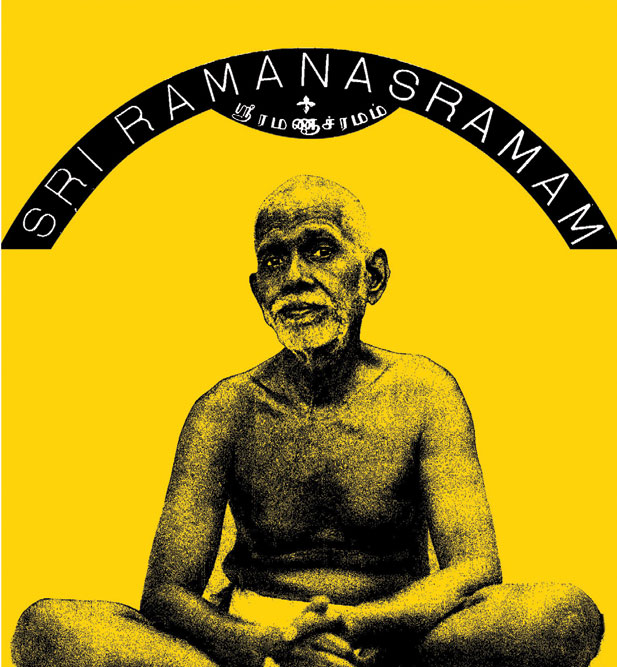 
THE SELF CALLS US back in mysterious ways. Sometimes, It takes the form of a seemingly “insentient” hill, but Its actions surpass human understanding. For It initiates the destruction of sense-identification, making us truly sapient. But to encounter That, one must enter, in an earlier version of oneself, the sacred precincts of the ashram of the Master.

Sri Ramanasramam, famous the world over as the residence and resting place of Ramana Maharshi (December 30, 1879-April 14, 1950), is marking a quiet centenary as this year draws to a close. The Maharshi himself arrived in Tiruvannamalai on September 1, 1896, as a young lad not yet 17. He was already established in non-dual consciousness after his famous “death experience.”

It happened somewhat like this. In mid-July 1896, in a small house in Madurai, quite spontaneously, 16-year-old Venkataraman Iyer was overcome with the fear of death. As he himself recalled several years later: “I was sitting in a room on the first floor of my uncle’s house. I seldom had any sickness and on that day there was nothing wrong with my health, but a sudden, violent fear of death overtook me.… I just felt, ‘I am going to die,’ and began thinking what to do about it.”

Without seeking anyone’s help, Venkataraman applied what came to be known as vichara marg, the exercise of judgement, consideration, deliberation, or informed analysis to discover the meaning of death. The pressure or prospect of sudden death had made him turn within: “The shock of the fear of death drove my mind inwards and I said to myself mentally, without actually framing the words: ‘Now death has come; what does it mean? What is it that is dying? This body dies.’ And I at once dramatised the occurrence of death. I lay with my limbs stretched out stiff as though rigor mortis had set in and imitated a corpse so as to give greater reality to the enquiry. I held my breath and kept my lips tightly closed so that no sound could escape, so that neither the word ‘I’ nor any other word could be uttered.”

The young man then reasoned to himself: “‘Well then,’ I said to myself, ‘this body is dead.’ It will be carried stiff to the burning ground and there burnt and reduced to ashes. But with the death of this body, am I dead? Is the body ‘I’? It is silent and inert but I feel the full force of my personality and even the voice of the ‘I’ within me, apart from it. So, I am Spirit transcending the body. The body dies but the Spirit that transcends it cannot be touched by death. This means I am the deathless Spirit.”

The summation of this realisation was offered by the Maharshi years later in the nostrum “Deham naham koham soham”—Not the body am I, who am I, I am That.

It is important to remember that vichara is not mere thought. It is, rather, as its word meaning denotes, a special kind of procedure (cara). What it really entails is an application of reflection, examination, discrimination, a dispassionate investigation into the very nature of things. So that their truth is understood, not just mentally, but with one’s whole being. As Maharshi himself put it: “All this was not dull thought; it flashed through me vividly as living truth which I perceived directly, almost without thought process. ‘I’ was something very real, the only real thing about my present state, and all the conscious activity connected with my body was centred on that ‘I’. From that moment onwards the ‘I’–or Self–focused attention on itself by a powerful fascination. Fear of death had vanished once and for all. Absorption in the Self continued unbroken from that time on. Other thoughts might come and go like the various notes of music, but the ‘I’ continued like the fundamental sruti note that underlies and blends with all the other notes.”


Without seeking anyone’s help, Venkataraman applied what came to be known as Vichara Marg, the exercise of judgement, consideration, deliberation, or informed analysis to discover the meaning of death. The pressure or prospect of sudden death had made him turn within

After this realisation, Venkataraman’s life did not remain the same. He “felt no perceptible or direct interest” in his body, “much less any inclination to dwell permanently in it.” He began to visit the Meenakshi Temple nearby. He had tears in his eyes when he gazed at the forms of the 63 Tamil saints, the Nayanars, who are engraved at the entrance corridor of the temple. In just over a month, he ran away from home, never to return.

His “fatal attraction” to the hill of fire had already been anticipated by Guru Namasivaya. Ramana quoted the lines later in his Arunachala Ashtakam or “Eight Stanzas on Sri Arunachala”: “The hill which draws to itself those who are rich in jnana-tapas is this Arunachala.” The attraction proves “fatal” because “just as the prey which has fallen into the jaws of a tiger has no escape, so those who have come within the ambit of the Guru’s gracious look will be saved by the Guru and will not get lost,” (Who Am I ? [Nan Yar?] trans. TMP Mahadevan).

During his first days in Tiruvannamalai, Ramana lived in the great Arunachaleshwara Temple in what is called the “Patala Lingam”, or the underground shrine. His hair and nails grew long, insects bit him, but he remained unmoved and silent, utterly neglecting his body, hardly eating at all until force-fed. Eventually, someone gave him a bath, cut his hair, and gave him clothes to wear. Ramana next began to live in mountain caves. For 16 years, he resided at the Virupaksha Cave (1899-1916). After his widowed mother, Alagamma, came to join him, he moved 200 metres higher, into a cave which came to be known as Skandasramam, residing there till 1922.

After his mother died on May 19, 1922, the Maharshi moved down to the present site of the ashram, where a temple, Matrubhuteshwara, was later constructed above her samadhi or burial shrine. It is recorded that he took up permanent residence there about a week before his 43rd birthday, which fell as per the Hindu calendar on January 3, 1923. This is why the centenary celebrations of Sri Ramanasramam are to be marked from September 1 this year, the day of his arrival, till his next birthday, which is to fall on December 28, 2023.

From the first hut that came up in late 1922 to the Master’s death on April 14, 1950, the ashram of the sage attracted thousands of serious seekers from around the world. By 1924, another hut, opposite the samadhi, was erected. Tanks were dug for water, prasad or consecrated food began to be prepared for devotees, vessels and utensils were donated as was money, a bookstore was started, then a goshala or cowshed was built, guest rooms also came up around the premises, and much later, two big halls, a dining room, a dispensary, and many permanent structures. Nagasundaram Iyer, the Maharshi’s younger brother, who later took the name Niranjanananda Swami, became the first sarvadhikari or administrative head of the ashram. To this day, the eldest son in his lineage runs the ashram, the present head being Anand Ramanan, a US-based medical doctor, and Niranjanananda’s great-grandson.

My own connection with Tiruvannamalai and Ramana Maharshi must have been divinely ordained too. It happened 80 years after Ramana Maharshi, when, also at the age of 16, I was drawn to the holy hill of fire, Arunachala. In November 1976, I wandered into the ashram knowing nothing about either the mystery or majesty of Sri Annamalai or of masterhood and mercy of Ramana Maharshi.

Looking at the hill in the dimming light, I found the voices around me fading away. But I felt wide awake. I could see the hill and nothing else. Looming large ahead, growing in size, almost advancing towards him in the incandescent dusk, it had totally arrested my attention. The mind was captivated. The wild, whirling thoughts had subsided. I felt alert, quiet, and still.

Whenever I visit the ashram, I go to the small meditation room. There, a huge portrait of the Maharshi looks on as I sit on the cool, tiled, basalt floor. The Maharshi is reclining on a couch covered with a tiger skin. The portrait now rests on the same sofa on which the sage used to sit. The eyes of the Master look with utmost compassion mingled, with faint amusement. “Oh, so you’ve come again?” he seems to ask.

The room is utterly silent. So am I.