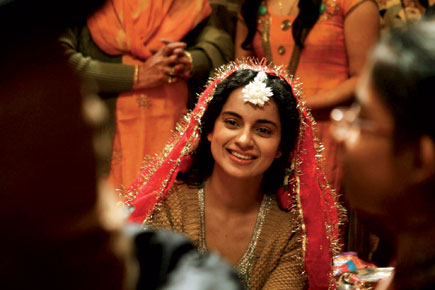 Rani is the daughter of a Halwai from Delhi’s Rajouri Gardens, but she makes it clear that her reference point for postmodern culture is Lajpat Nagar. On her honeymoon in Paris, minus the fiance who dumped her, she is shocked by a lot of things she sees, and declares, virtuously, that such things would not be allowed in Lajpat Nagar.

Transporting this sweet and simple- minded personality to Europe is director Vikas Bahl’s trump card in Queen. Her heart broken by Vijay (Rajkummar Rao), the man who changes his mind about marrying her at the eleventh hour, Rani translates her name into English (‘Queen’) for the benefit of the eclectic bunch of friends she makes on her sojourn in Paris and Amsterdam.

The friends—an Indo-European bombshell (Lisa Haydon), a Russian, a Frenchman, a Japanese and an Italian—are cute, but the whole movie is built around Kangana Ranaut’s take on the character she is given. ‘Deconstructing Rani’ is what Queen is about and, significantly, the moment Ranaut is off screen, the movie wilts.

This happens in Delhi for the first 20 minutes of the movie. Here, we go through the usual ‘Punjaban’ pre-wedding routine that makes the movie look quite ordinary. Later, in Paris and Amsterdam, the antics of her international friends look a little too pat, and, without the social context that Rani brings to the melange, would certainly fall flat. But the director is clever, and never lets her out of the frame.

So there is no story to speak of, only a unique character, and Ranaut carries it off with a masterful observation of middle-class North Indian sensibility and an insightful take on this society’s conservative views on the role of women. While playing Rani with conviction, she also looks at Rani with irony, from outside, from a cosmopolitan perspective, and that is why the movie is so funny.

It is a delightful performance that you shouldn’t miss.