A mysterious love story, where you just don’t know who is in love with whom 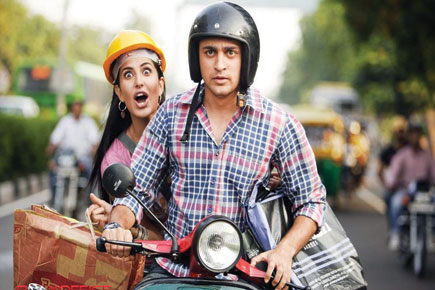 A mysterious love story, where you just don’t know who is in love with whom


The premise of this movie—hijacking your brother’s bride—sounds promising, but the director makes poor use of the entertainment possibilities encrypted within. The overall narrative is passable, but the construction of individual scenes is not creative. Whatever energy the actors put into their performances is largely wasted because the film doesn’t get the characters to talk to each other. What we have is a series of bravura recitals.

Take Dimple Dixit (Katrina Kaif), for instance. A rocker from LSR (Lady Shree Rao College), she has a lot of the ‘guy’ in her, getting men to sing along and pretend to treat her as an equal. Even though the boys all have the hots for her, they generally grant her the respect her liberated soul deserves. Kaif plays this part of an unconventional and open-minded girl well, until she runs out of steam. She peters out because the film fails to connect her, either emotionally or dramatically, to the brothers Luv (Ali Zafar) and Kush (Imran Khan).

Luv is in London, and, in the opening scene, directed like a one-act college play, he breaks up with his girlfriend (Tara D’Souza). Younger brother Kush then has the onerous task of finding him a suitable girl to marry in India, and in a decision that seems bizarre, given her self-willed personality, he selects Dimple.

With an excellent command over Hindi/Urdu, Ali Zafar is energetic, but again, it seems that he is performing as he would in an audition, for appreciation, and not for the sake of either the narrative or character. Imran Khan’s Kush is the only actor in Mere Brother Ki Dulhan who seems mildly concerned about the general direction of the film. At least he reacts to other people.

Finally, you leave the theatre without any imprint of the film in your mind. If it is a love story, who, exactly, was in love with whom?