The world according to Sonu Nigam 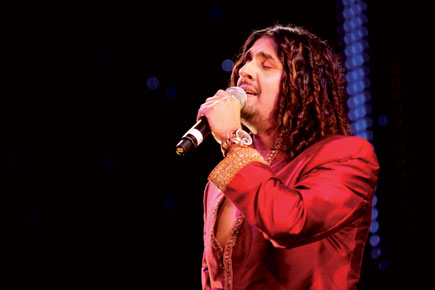 The world according to Sonu Nigam

Sonu Nigam is sitting across a glass table in his office and discussing death. The mood isn’t morbid or sombre. Nigam, 40, has been entertaining people since he was four, but he isn’t putting on a performance here. He does, however, make you laugh when he talks of mortality in the same breath as sex, singing, sneezing and itching.

“When I’m in a concert, I’m already dying because time stops then. When I get off a stage, I feel as if I’m in a post-orgasm space. There are different points of timelessness. It happens when you have an orgasm; that’s why people want sex so often.” Warming up to the idea, Nigam grins and says, “Sneezing is a small fashion of orgasm. You love sneezing or even itching. The human soul experiences the divine in this timelessness. When I sing, the words flow by themselves (hums the opening lines of his hit Shukran Allah). Real artistes always reach a point where there is sheer ecstasy.”

By his own admission, it is difficult to understand Sonu Nigam. He claims he isn’t afraid of death, despite the threats he has received from Chhota Shakeel, the right-hand man of mafia don Dawood Ibrahim. On 3 October, the Mumbai Police revealed that Nigam had got threatening phone and text messages from the gangster telling the singer to drop the event management company he had signed up with for a 2014 world tour and instead go along with an agent cherry-picked by the underworld.

An old controversy also resurfaced: Shakeel reportedly threatened to expose Nigam’s “friendship with an influential woman from a prominent family”, an oblique reference to Smita Thackeray. Did the innuendoes irritate him? Nigam shrugs. “You can’t judge the press. They have to make news exciting. I just wish they had been more concerned about my security.” Nigam is one of several Bollywood celebrities targeted by the underworld, and joins names as Akshay Kumar, Karan Johar and Rakesh Roshan. Nigam’s concerts in the US, Canada and the West Indies are sell-out affairs and newspapers reported in June that he had bought a plot in Juhu for an estimated Rs 25 crore to build his dream bungalow.

“How will he understand?” Nigam says, imitating Shakeel’s deep tone: “‘Hum ne bola na ki show karega, toh karega’ (If I say you’ll do the show, you’ll do the show). How will he know how I feel on stage?” In a letter published in the media on 4 October, Nigam explained his stance over the threats to “sort things out as truthfully as possible” with Shakeel. The singer-composer believes it is his honesty that “struck a chord with [Shakeel]”, implying that the threats are off.

Going by past interviews, you can expect pop psychology from Nigam. His mind is like a jigsaw puzzle—the pieces are jumbled, some even seem missing. Yet they fit in his head. It is pure logic for him to have felt frightened for an instant, not over the threatening calls, but because he would now have to seek police protection. “I was scared of losing my freedom. I don’t want to move around with cops and security all my life. I’m the kind of guy who wants to take my Innova—not my Range Rover—and go for a road trip with just one person to assist me with hotel bookings or if the car breaks down. I’m that kind of spirit.”

Nigam’s office is on the first floor of his white, three-storey bungalow, Namah, in Versova. When I arrive, security guards at the gate greet me with suspicion. Maybe I do not look like a gangster, but last year, the singer had a female stalker camp outside his home for five days until his family called the cops. I wait inside the compound while they check with his managers. A middle-aged policeman is sitting on one plastic chair, his feet up on another, engrossed in a newspaper crossword puzzle. There is a water tank enclosed by a wire fence with two geese that occasionally honk at you. Soon, I’m ushered past enormous portraits of Mohammed Rafi, Lata Mangeshkar and Nigam’s parents, as well as framed photographs of wife Madhurima and six-year-old son Nevaan, into an office space. There are computers, white boards listing his concert schedule and a magenta drum set with price tags still hanging off the cymbal stands.

Showered after a yoga session, Nigam strides into the room, looking absurdly young. There is a lot of work—concerts, composing movie soundtracks with his partner percussionist Bikram Ghosh, as well as singing the occasional Hindi playback and regional language songs, mostly in Kannada. He is taking a break from judging musical reality shows. “Who wants to do the same thing over and over? It’s big money, but I’m at peace that I’m not stagnating. It gets so mundane.” Nigam is also composing the soundtrack for the Sunny Deol-starrer Singh Saab The Great. It is a filmi twist of fate because Nigam once acted as the ten-year-old Sunny in the movie Betaab (1983).

Despite being a child artiste, Nigam slogged hard for years before he saw success. He came to Bombay as an 18-year-old nobody from Delhi, tagging along with his father, struggling singer Agam Nigam. Sonu believes those days that he begged for work from music companies and composers helped him grow as a person, despite the humiliation.

“It was great that someone threw me out. My papa and I would stand in the sun for hours to save Rs 5 and go by bus, then realise that we were standing at the wrong bus stop. I would sit outside offices for eight hours with no water or food. I’d think, ‘I’ll show them my perseverance.’ Your roots remind you of your reality.”

Nigam hit the big league in 1997, hosting the TV show Sa Re Ga Ma. And once he sang Sandese Aate Hain for Border and Yeh Dil Deewana for Pardes in 1998, he never looked back. Discontent set in quickly when, in 2005, Nigam realised he had become a ‘machine’, recording 11 songs a day, only breaking for lunch and a night’s sleep.

“There was a time that I had eight cars at home. I was young and had never really seen money. I bought books that I could only read on flights. You can relish your money, but you need to grow old with dignity.” He learnt some hard lessons too, like those from a doomed acting career in fiascos like Jaani Dushman (2002) and Love In Nepal (2003). “I fell into the trap. Acting comes to me naturally, but people didn’t want to see me in shady set-ups.”

Nigam’s epiphany happened in 2004, with yoga. It helped him work through the dilemmas in his head and his inner restlessness. Yet his marriage seems a work in progress. Nigam casually mentions how he caught a screening of Gravity with his wife Madhurima the previous night, but is caustic about marriage. “I see friends, colleagues struggling in marriage—the men trapped, the women frustrated. Marriages are going to be obsolete in the next few decades. Two people can be completely compatible, but that can happen within a marriage or out of it.” Sharp words, those, for a married man.

There is no ambiguity in his devotion to his parents, however. Nigam lost his mother Shobha in February and he feels that the deep sorrow only added another dimension to his life. “Yesterday, I woke up realising that for seven hours, I’d cried for her,” he says, making a sobbing sound like a child. “Not a single tear, but my soul was weeping the whole night.” The singer says he was only worried for his father after he received the death threats. “He lost his father in January, his soulmate in February and his childhood friend in August. I didn’t want him to have that stress about me.”

There is a sense of peace around Nigam, even though he peppers the conversation with mysticism, befuddling you with words like ‘cosmic mesmerising’. He reveals he is happier because he has cut back on work, devoting time to himself, sometimes getting engrossed in four hours of yoga and at other times, partying ‘like an animal’ with his friends.

“I’m a normal person. I’m not boasting about the things that are quirky about me. I know how to enjoy my life in every way.”

You catch a glimpse of how Nigam views his own life today when he speaks of his dreams for his son Nevaan. In 2011, when he was four, Junior Nigam sang a version of Kolaveri Di that quickly became a YouTube hit. There are doting fathers, but Nigam sees Nevaan through a prism of wonder.

“When I envision his future, I see him as a bright, shining example of happiness. He is a strange child, siddh purush. I was an angry kid. I would get baffled if someone spoke rudely to me. I want him to be an easier, calmer person. I don’t care if he doesn’t become a singer. I want him to be happy, not a frustrated successful man.”

If you had to pick the biggest hit of Nigam’s 15-year career so far, a strong case could be made for the Kal Ho Naa Ho theme song. “When I die, it will be the song played at my funeral. And if I survive a mishap, news channels will play ‘Abhi, mujh mein kahin, baaqi thodi si hai zindagi…’” Nigam sings from last year’s Agneepath, laughing through the soulful lyrics.