Even though a Benaras in transition comes alive in this film, it isn’t all that emotionally wrenching 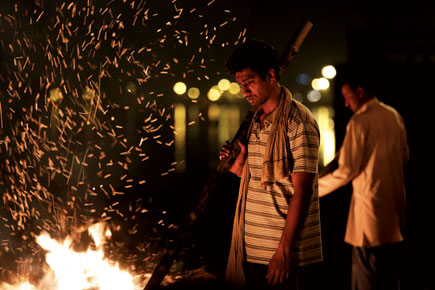 This is a convincing film about Benaras, but it has few moments of poignancy. The burning ghats and the ghastly work of Doms, a Hindu sub- caste whose job is to make sure every part of a dead body is burnt to ashes, come through well, as does the claustrophobia that envelops a rigidly stratified society in the ancient capital of the Hindu faith. If the entrapment of characters in their environment was the only thing the director wanted to convey, then the film may have been adequate. But two independent stories that do not intersect, except perhaps in the last scene, is what makes up the narrative of Masaan. And though the individuals portrayed are interesting, their journey is not.

The movie begins dramatically with a young couple making love in a hotel. A corrupt and opportunistic police officer breaks in, takes a video and threatens to upload it for public consumption. This is the story of Devi (Richa Chadda) and her father, Vidyadhar (Sanjay Mishra), a retired professor of Sanskrit making ends meet on the banks of the Ganges. He is now given an impossible deadline to produce Rs 3 lakh to keep his daughter’s private life off YouTube. The second story is about a young man from a family of Doms, studying Engineering to liberate himself from the associations of his caste. Deepak (Vicky Kaushal) falls in love with an ‘upper-caste’ girl called Shaalu (Shweta Tripathi) and is inebriated with the headiness of his romance, even though he has disturbing intimations of a destiny foretold.

Though the stories do not intersect, the film cuts between them as if to say that human destinies are all intertwined in this city, criss-crossing between life and death. But the emotional links between characters are weak, and the film ends with the sense of incompleteness with which it begins.