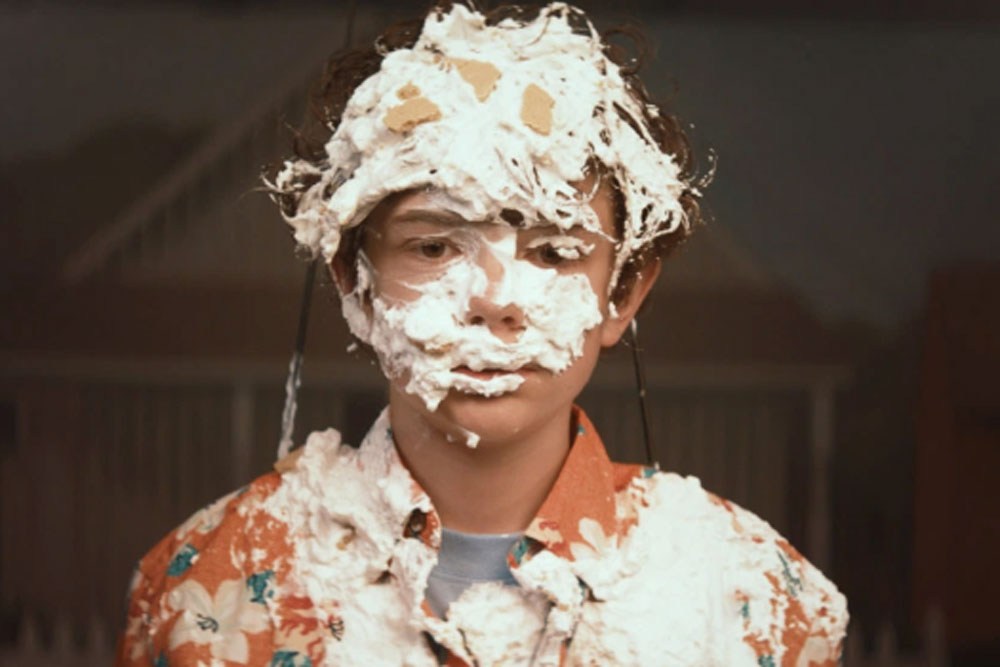 The film opens with a young man in frame looking right into the camera with a half-burnt plane in the backdrop. In seconds, he’s struck by an explosion, he flies high into the air, and we hear ‘Cut’. He’s brought down, re-harnessed and they are ready to go again. Through a montage of sequences from various films, we are introduced to Otis. Otis is an actor in Hollywood and has been performing since the age of 12. He’s a prodigy kid, the best at what he does and is passionate about his craft. But Honey Boy is not about his love for performance. It’s about his childhood that’s anything but normal. It is about this kid’s sincere struggle to cope with an abusive father who is a failed comedian himself, and today manages his son’s work. An autobiographical account of the life of writer and actor Shia LeBeouf’s complex relationship with his own father, Honey Boy is heartbreaking in its portrayal of Otis’ struggle. Otis comes from a broken family and somewhere he gets lost between wanting to be a kid, hoping for his father to behave like a responsible dad, and being the adult in the relationship. His dad is an alcoholic, a convicted felon and seems too selfish to take heed to the emotional needs of his own kid. Your heart goes out to the child actor Noah Jupe who taps into Otis’ vulnerabilities so beautifully. He’s required to smoke cigarettes and engage in a semi-romantic scenario with a much older female friend—both situations that only adults are expected to deal with. Noah, however, pulls of some challenging bits in the film with absolute grace, so much so that you he often leaves you choked in his expression of Otis’ pain. At one point, he says to his father, “If I didn’t pay you, you would leave.” His desperation for a father who is really present for him is revealed here. Shia LaBeouf himself plays the dad in the film and breaks down his own father’s predicaments with a superlative performance. Both father and son have their moments that are just their own, ones that Otis wishes last longer than they do. Like their drive to the studio, or their evenings beside the pool.  The film stays with you for its originality and just for the fact that LaBeouf has been able to draw out his own life on screen with such sincerity and objectivity. 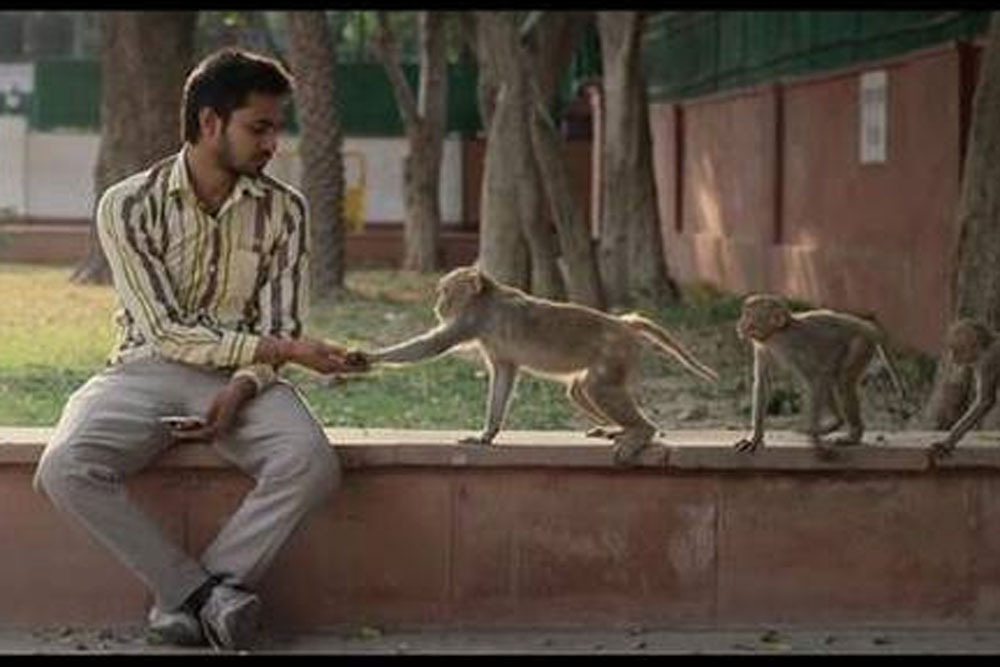 Themed on the very unique gang of workers in Delhi who are employed to control the growing monkey menace in the city, Eebb Allay Ooo through its title literally spells out the sounds they make to get their job done. These workers through their unique voices attempt to create the sounds of a langur, hence chasing the monkeys away. They are stationed all across the city, including the Parliament House where Anjani, a recent migrant to the city, is expected to leave no stone unturned in protecting the space from the monkeys. Anjani, sadly, is not the man for the job. He feels intimidated by the animal and is completely purposeless in a new city. Director Prateek Vats comments on many things, including how on one hand we worship monkeys, and on the other, we wouldn’t keep from hurting them if they cross over into our compounds. The script plays out the struggles of migrant families in urban spaces, like Delhi, who are often jobless and try hard to make ends meet. A sub-plot in the film shows the life of Anjani’s pregnant sister who makes and sells fried chips from her home and brother-in-law who works as a security guard at night, but is too scared to use his newly acquired rifle. The growing unrest and the political state of the nation plays out silently in the backdrop. In the larger context, one can see that the characters in the film are hesitant to do anything that may end up hurting a living being, be it monkey or a human being. The overall message here also is to let people and animals be in their spaces and survive collectively instead of attacking each other. Vats and his team manage to juxtapose the irony of animals who are free but homeless and humans who have homes but feel caged through the film. It’s a unique subject and a universal message that we all could do with, especially at this time in the country. 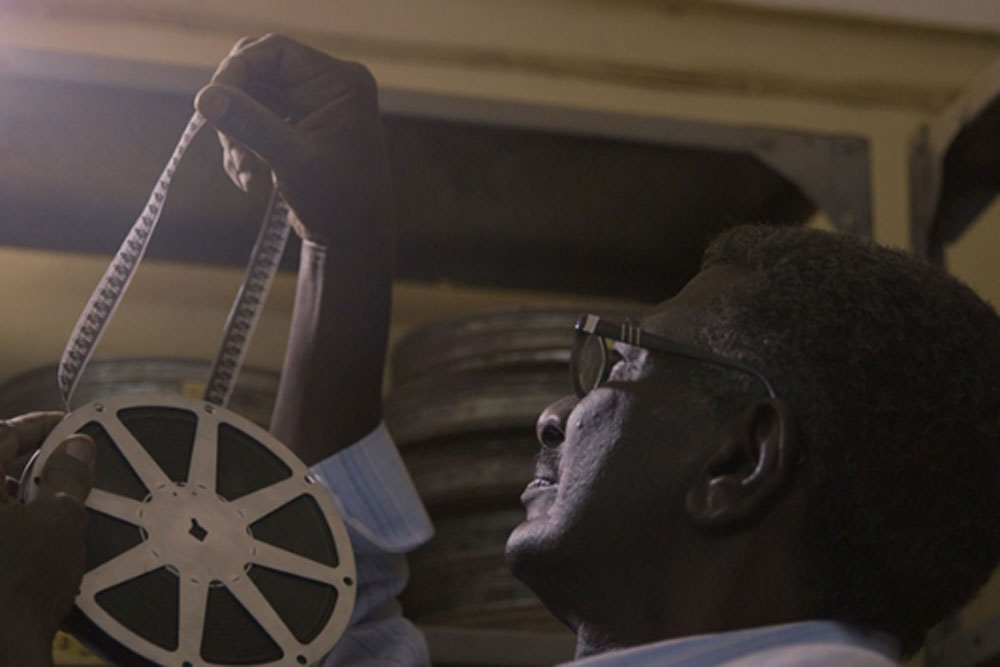 Talking about Trees celebrates cinema like few films have at the festival this year. It documents four friends all above the age of 60 and their undying love for cinema. Unfortunately, they belong to Sudan, where cinema has always struggled to survive under an Islamic regime. However, Ibrahim, Suleiman, Manar, and Eltayeb who had left their motherland to study filmmaking in Russia are determined to bring cinema back to their nation. They are retired directors who dream of re-opening a cinema hall that’s been shut for years, and screening the Hollywood blockbuster Django Unchained for 5,000 people there. The film opens in a dark home where Ibrahim and Suleiman converse with each other under a torchlight. There has been a power-cut for over four days, and they try to enquire why. When they realise that there’s little hope for the power to be back, they go to the terrace, place the torchlights and pretend to enact a scene from a film. Their imagination is vivid, storytelling skills alive, and it’s endearing to see how it keeps the fire in them burning. They take us through old film reels, student notes, photographs during the 1970s when they started their film careers. They fought the regime in Russia too, serving time in jail as student revolutionaries, and they are now doing the same in their own home country. Tirelessly they clean, mend, polish every little corner of the cinema hall, and paste posters and erect chairs for the patrons who they hope will turn up for the screening. They talk to the children playing football outside the theatre about how cinema can change the world. Simultaneously, they are drowned in paper work and unnecessary questions about why they are wanting to screen the film by their local government officials. The film depicts the extreme lack of freedom of expression in a so-called democratic nation where the country’s men and women have to fight hard for every little pursuit, be it cinema or sports or music. At one point in the film, Ibrahim wonders how the audience would react to prayers being belted out of six loudspeakers in mosques around the cinema hall, which will obviously drown out the sound of the film. The title suggests how talking about cinema in this world is as dangerous as talking about trees these days. Art has always been at loggerheads with any government that tries to clip its wings, and this film based out of Sudan only makes us appreciate the freedom we enjoy in our own country. 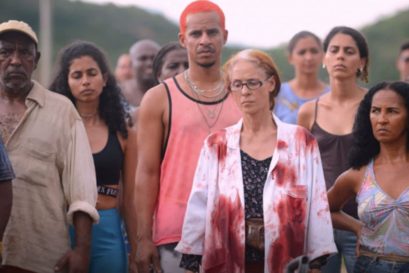 A film set in a remote Brazilian village a few years from the present day, Bacurau is a community of people that share everything. Their food, their tragedies, their arms, and most of all, their trust. It’s an open society where prostitution isn’t looked down upon, homosexuality isn’t a taboo, nudity is a way of life and doors are not shut for sex. They are protective of each other, traditional in their own way, and matriarchal from the word go. The film opens to a tragedy where the community is bidding goodbye to its oldest matriarch where the entire village sings together to celebrate her spirit. However, they aren’t popular in the outside world as one among them deemed as a dreaded gangster is wanted. As we get to know their world and unique choices, we are also made aware of their problems. Water is scarce and the local mayor doesn’t care about their well-being as long as they cast their vote for him. This is where the film takes a leap, where we are introduced to a gang of white Americans who are plotting to gun the entire village down with vintage arms. Bacurau is an edge-of-the-seat drama where we see the village come together to save itself from a massacre at the hands of these White supremacists. The story is political to its core talking about the wiping out of civilisations at the hands of the rich and powerful. Vast discrepancies in Brazil’s very own society where one section is well-off, and the other struggles to meet ends are highlighted within the story, making a strong point about the country’s current social scenario. The film is brutally violent, and you can expect a few dozen bloodbaths as you go, but very interestingly, it’s paced like a 1970s cowboy drama that brings out the beauty in the revolution of this community. Bacurau won the grand jury prize at this year’s Cannes film festival, and it’s the only film with those many kills that’ll leave you joyous and hungry to stand up to anyone who has exploited you for power and prestige.

Moment of the Day: When City of God director Fernando Meirelles walked into the cinema hall for his masterclass, the theatre roared with applause watching one of the world’s most legendary filmmakers walk down the aisle to discuss his work with Mumbai’s film fanatics.