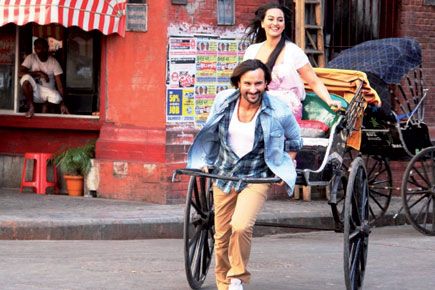 At times, the politics and visual design of Bullett Raja make it look like it was made from out-takes of Saheb Bibi Aur Gangster Returns, director Tigmanshu Dhulia’s last release in March this year. The two films even have a similar cast, with Jimmy Shergill and Raj Babbar playing central roles and Mahie Gill positioned as a decorative vase. The dialogues—conversational, with a touch of satire directed at the abject state of politics in Uttar Pradesh—seem analogous.

Given the high level of vendetta in UP politics, the film suggests, the honourable members of the Vidhan Sabha in Lucknow need ‘political commandos’ to help them with their work. These are basically intelligent, somewhat literate goondas, sharp shooters who can help shut up some people and persuade others to do their masters’ bidding. They help oil the machinery of state, lubricating the relationship between corporate investors and law makers.

A senior minister in the government (Raj Babbar) is impressed by the shooting expertise and intuitive co-ordination between Raja (Saif Ali Khan) and Rudra (Jimmy Shergill). He hires them to silence, extort and kill, all in the pursuit of ‘development’. On one occasion, he sends them as ‘observers’ to a meeting between senior police officers, politicians and a financier called Bajaj (Gulshan Grover). The two ‘commandos’ feel ignored and disrespected by Bajaj, and the plot thickens.

The crux of the film is the relationship between Raja and Rudra, and in their bonding there are touches of the Veeru and Jai jugalbandi from Sholay. They ride around on a motorcycle, joke about the girl Raja woos (Sonakshi Sinha) using the metaphor of hitting a target—“lag gaya nishana”—and have a live-in relationship.

Despite all this interesting sub-text, the film fails to grip you with its central narrative. Saif Ali Khan does not fire in Bullett Raja. Jimmy Shergill looks the better actor, but he is not the film’s star.