In the Islamic Republic of Michel Houellebecq

Life inside the Islamic dystopia of France's greatest living novelist 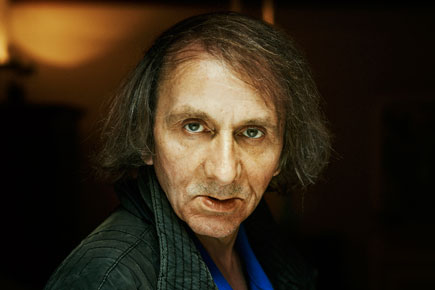 The day Michel Houellebecq’s new novel, Soumission, was published, on 7 January, two Islamic terrorists, shouting “Allahu Akbar”, stormed into the editorial meeting of Charlie Hebdo in Paris and killed 12 cartoonists and writers, among them a close friend of the novelist. On the cover of that week’s magazine, adding irony to coincidence, was Houellebecq, unarguably the greatest living French novelist with global name recognition, caricatured here as a profane prophet. Soumission, in which France will have an elected Islamic president in 2022, happened in Europe’s most volatile country with maximum concentrations of Muslims and Jews that was waking up to the terror within: the reality of its own citizens, invoking an angrier god, killing and getting killed for a Republic greater—and of course more divine—than the Fifth. The left, without reading a word of his new novel, condemned Houellebecq as an incendiary provocateur. Unread or misread, Houellebecq, on publication day, was in that familiar danger zone where the context, political or religious, takes precedence over the text.

Now that the text is available in English, we can read Submission (translated from the French by Lorin Stein and published in the UK by William Heinemann), without the distraction of its hoary publication history, as an original piece of 21st century fiction. The dystopian excursions of Houellebecq, contrary to what you might have been made to believe by his caricaturists, is not some sort of fin de siècle sensationalism by an Islamophobic alarmist. It is not, contrary to what you might have expected from a writer who once famously called Islam a “dumb” religion founded by a “cretin”, a monochromatic political allegory in the time of ISIS. It is more refined than the sum total of the exclamations its author, a lone voice of post-modern ennui, had evoked in that horrifying month of January in Paris.

The narrator of Submission is a middle-aged professor of literature at the Sorbonne, with a specialisation in Joris-Karl Huysmans (1848-1907), a bureaucrat-turned novelist whose most popular work is Against Nature. François is a lonely man, living in a cheerless place, bored and exhausted, meditating on the futility of academic life or the hopelessness of his own imagined future. Here he is on the marginal value of literature: ‘A young woman applying for a sales job at Céline or Hermès should naturally attend to her appearance above all; but a degree in literature can constitute a secondary asset, since it guarantees the employer, in the absence of any useful skills, a certain intellectual agility that could lead to professional development—besides which, literature has always carried positive connotations in the world of luxury goods.’

François is a sardonic memoirist, and his life is an eventless passage of casual sex and mistresses; his relationships, with a longevity not exceeding one academic year, are mostly with students. When the possibility of andropause dawns on him, he gives himself to pornography, which he finds is a choice better than the alternative of women with damaged sexuality. Watching hard porn on his 27-inch iMac is worthy of a man who spent years studying a ‘decadent’ such as Huysmans, he consoles himself. The only former girlfriend he returns to is Myriam, a woman of discreet sexuality: ‘For men, love is nothing more than gratitude for the gift of pleasure, and no one had ever given me more pleasure than Myriam.’ Even that pleasure will not last, as François, his life sustained by microwaved Indian fast food and a literary doppelgänger from another century, slowly awakens to the political change in France.

He has no interest in politics, but he cannot miss the signs of shift on the campus itself: unexpected visitors to the sisters in burka, rumours of an agreement between Salafists and the university administration, the banning of Jewish organisations, a pro-Palestine university president, and the rise of the Muslim Brotherhood. It is the year 2022 and a presidential election is underway, and, as expected, National Front’s Marine Le Pin comes top in the first round, followed by the Muslim Brotherhood and the Socialists, with the traditional right being the worst performer. The apolitical François is sharper while reacting to centre-left newspapers such as Le Monde that have been denouncing ‘the Cassandras who predicted civil war between Muslim immigrants and the indigenous populations of Western Europe.’ In Greek mythology, all predictions of Cassandra, including the one on the Trojan Horse, came true. ‘In hindsight,’ says François, ‘the journalists of the centre-left seemed only to have repeated the blindness of the Trojans. History is full of such blindness: we see it among the intellectuals, politicians and journalists of the 1930s, all of whom were convinced that Hitler would ‘come to see reason.’ It may well be impossible for people who have lived and prospered under a given social system to imagine the point of view of those who feel it offers them nothing, and who can contemplate its destruction without any particular dismay.’ Gun shots and black smoke before the elections will vindicate him.

In the presidential run-off, the Muslim Brotherhood’s Mohammed Ben Abbes wins with the support of the Socialists—and France gets its first Muslim president, a moderate who is hardly anti-Semitic. The Brotherhood is generous in power sharing, and it is not interested in traditional sources of power. What matters most to them is not the economy, but the birth rate and education. ‘To them it’s simple—whichever segment of the population has the highest birth rate, and does the best job of transmitting its values, wins. If you control the children, you control the future.’ In the mall, social changes will not affect shops selling designer lingerie though. They will be as free as they are in Riyadh or Abu Dhabi. Another sign of cultural difference: ‘Hidden all day in inpenetrable black burkas, rich Saudi women transformed themselves by night into birds of paradise with their corsets, their see-through bras, their G-strings with multicoloured lace and rhinestones. They were exactly the opposite of Western women, who spent their days dressed up and looking sexy to maintain their social status, then collapsed in exhaustion once they got home, abandoning all hope of seduction in favour of clothes that were loose and shapeless.’

François, now armed with a foreign account and a visa as insurance against an uncertain future, is a social commentator. The new president, the son of a Tunisian grocer and the product of France’s republican meritocracy, has no intention of undermining the system that supported his ambition. Still, the Islamisation of society cannot be missed: all the women on the street now wear trousers, which is particularly dispiriting for someone whose sexual fantasies are activated by bare legs. And in the Islamic University of Paris-Sorbonne, François is no longer permitted to teach. Only the converted gets to retain their jobs, with higher salaries and the pleasures of officially sanctioned marriages with students. Politically, Ben Abbes’ National Unity coalition gets universal appreciation: the crime rate has dropped and unemployment has come down. His reforms in education have restored ‘the centrality, the diginity, of the family as the building block of society.’ The guiding principle of Ben Abbes’ political philosophy is ‘distributism’, an economic model espoused by GK Chesterton, and which in practice is the ‘third way’, a version of ‘state capitalism’. It is compatible with Ben Abbes’ Islamism because its basic economic unit is the family. And his model of the Islamic idyll has already begun to take root in other parts of Western Europe.

Parallel to the religious reconstruction of France runs the story of François’ degeneration. He is the lone man in a wretched place, and his suffering at times looks as if he is France personified. At 44, his body is a collection of all kinds of pain, his penis being the only organ ‘that hadn’t presented itself to my consciousness through pain, only through pleasure.’ That could have been what the idyll worshippers of Islam said about a pre-Brotherhood France. So when in distress, he turns to the eroticism of paid sex. Even that will not help: ‘I was incapable of living for myself, who else did I have to live for? Humanity didn’t interest me—it disgusted me, actually. I didn’t think of human beings as my brothers, especially not when I looked at some particular subset of human beings, such as the French.’ He admits that, in the end, he is just one of them. His inner Huysmans is not awakened yet. To follow the writer is to find peace in the mysticism of religion. One night, he just breaks down and decides to follow the master. He returns to the abbey where Huysmans had converted to Catholicism. Redemption still defies him: the place offers him nothing, and it is no longer the place where his hero had his epiphany. The chants by the monks only make him more sceptical. ‘That old queer Nietzsche had it right: Christianity was, at the end of the day, a feminine religion.’

The setting is ideal for a faux-Faustian deal. Enter Robert Rediger, the recently converted Muslim president of the Sorbonne, over the gates of which now shines a golden crescent. In Rediger’s gothic mansion, he meets his 15-year-old new wife, and the older one with hostess duties. “At the end of the day,” he asks François, “isn’t there something ridiculous about some puny creature, living on an anonymous planet, in a remote spur of an ordinary galaxy, standing upon his hind legs and announcing, ‘God does not exist?’” Over many glasses of Meursault—Islam in France cannot prohibit wine—the empowered proselytiser tells François that “the summit of human happiness resides in the most absolute submission.” According to him, there is “a connection between woman’s submission to man, as it is described in Story of O, and the Islamic idea of man’s submission to God.” And that is why, in Islam, the divine creation is “an absolute masterpiece.” The scholar of Huysmans, a European pessimist who found peace by submitting himself to religion, will have a place at the Islamic Sorbonne. François, too, has to seek submission. He needs to accept the perfection of faith—and the rewards are not purely academic.

It is easy to read Houellebecq’s dystopia as what-if alarmism by a European pessimist. The politics of this book is subordinated to the existential tension of its narrator, who is as detached and ‘heartless’ as French literature’s eternal Stranger. He loses nothing because he has possessed nothing, and that is why when Myriam, who has left the new France for Israel, finally abandons him, he does not see anything unnatural in her attitude. He remembers his dead mother with revulsion; he is pretty business-like as he deals with his father’s death. François lives outside history, and it is easier for him as he is untouched by emotions. He is the outsider in a continent where the alternative to disintegration— political and cultural—is the perfect conceit of religion. In another era, when ideologies promised paradise, it was writers such as Sartre and Camus who put France in the literary vanguard, and their Gauloises-flavoured imagination and arguments reduced the distance between national crisis and the existential angst of the citizen.

Michel Houellebecq is a worthy successor. This novel, rich in literary allusions and diversions, has been imagined by a writer who refuses to be at home in a world where submission is more than a rejection of reality. It is the illusion of a life abandoned by history—and claimed by religion.