Growing Up on Sportstar 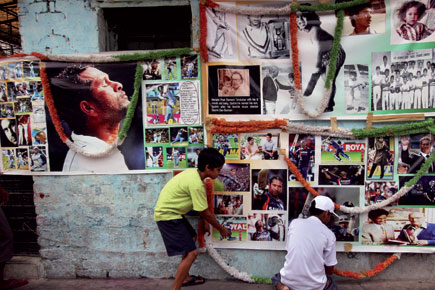 
In the early 90s, a man visited my father a few times in connection with work. My sister and I thought he resembled Franco Baresi, the balding and grim-faced defender in the Italian football team. ‘Baresi’ became our name for him. One day when he came home, my mother answered the door and told my father, “That Baresi or Qureshi is here.”

Our family was crazy about sports, especially my father, my elder sister and me. My eldest sister also followed sports but not with the same intensity. My mother, a proud patron of Marathi creative arts, looked down upon this plebeian endeavour. But she would have had to somersault across a laser field like Vincent Cassel in Ocean’s Twelve to stay untouched by the sports virus in our house. Inevitably, sports or pop culture influences took root in her mindspace. And so she inadvertently hummed Papa Don’t Preach while making sandalwood paste for the puja, or registered names such as ‘Baresi’. Even today, she is prone to asking me out of the blue, “So what is McEnroe up to these days?”

Three things contributed to my family’s love for sport. My father played local league football and was particular about exercise all his life. He liked everything athletes stood for—style, fitness, and above all else, activity. My father hated lethargy. The second reason was Doordarshan, which in that era (the 80s and 90s), brought home just the right amount of sports. Not too much, as is the case now. Not too little, as was the case before. The third reason, and the focus of this memoir, was sports magazines. This was the pre-internet world and therefore the jazz age for magazines. Men of all ages of that time had piles of sports journals.

Sport and Pastime, published by The Hindu Group, was the top sports magazine of earlier eras. But by the time my generation came round, the three major ones were Sportsweek, Sportsworld and Sportstar. Each belonged to a major newspaper group and city. Sportsweek was a Mumbai product owned by Mid-Day. Sportsworld came from Anandabazar Patrika in Kolkata, and Sportstar from The Hindu in Madras.

My father was a fierce football and hockey lover who laughed at cricket. He subscribed to Sportsweek after India won the 1975 hockey World Cup. The winning team was on the cover. We were a Sportsweek family for almost a decade. It was through Sportsweek that I got acquainted with the names of Khalid AH Ansari and Ayaz Memon, my bosses in later life. I remember excerpts from Sunil Gavaskar’s Idols that the magazine ran, and its coverage of the 1983-84 India-West Indies series. My father also used Sportsweek to improve my English vocabulary. He underlined words and wrote their meanings in the margins. I found out what ‘pathetic’ and ‘vicious’ meant in this fashion. Other random memories of the magazine include a cartoon character called Sporting Sam.

Towards the mid-80s, however, that Chennai Express called Sportstar roared past its rivals. It upped its production quality, introducing glossy paper in key sections of the magazine. It carried syndicated content from around the world and had talented writers on its own staff. Sportstar was like a Yash Chopra movie, lush and international. Name the sport and the magazine was strong on it. Cricket, tennis, Olympics, football, hockey and track-and-field were all better covered in Sportstar. Sportsweek and Sportsworld had quality journalists too. The gifted Rohit Brijnath, for instance, learnt his ropes at Sportsworld. But Sportstar’s overall strength as a product was unmatched. Eventually, our family switched loyalties to Sportstar. I was never a subscriber, but bought many issues off the stands and others from old book shops (sneaking a look at Debonair in the process).

These days, one finds lines about the joy of ‘curling up with a book’ clichéd. But to buy the latest Sportstar from a newsstand, or locate a prized past issue at an old paper mart (raddiwala) , and then enjoy it at leisure at home while the rain came down outside was indeed a pleasure.

My obsession with sports magazines made me an expert on raddiwalas in our area, and also the lay of the land in their shops (this was important when money was short and material had to be pilfered). Somehow, the prominent raddiwalas of my childhood were all Gujarati and had names starting with ‘P’. There was Patel Paper Mart, Punjani Paper Mart, Pethani Paper Mart and I think Pravin Paper Mart too. For a while, Patel was the family raddiwala.

One day I was returning home with my father when we saw a four-page poster of Jimmy Connors displayed at Patel’s. Connors on Nehru Road in Vile Parle East. Connors hitting a double-handed backhand with his signature steel Wilson T2000 racquet. Had Connors actually been present at that spot and hit a shot, the ball might have flown across the street and knocked someone drinking cheap liquor at Bharat Hindu Hotel and Bar on his head. The poster was from a foreign magazine, and not any foreign magazine: a French one. Nose in the air, Monsieur Patel quoted the price. “Five rupees, not a paisa less.” Five bucks for a poster was a steep sum at a time when a new Sportstar cost Rs 3. My father, a Jimmy Connors of bargaining, haggled spiritedly. But the gangly Patel won the argument with this clincher, delivered in a Gujarati accent: “Saheb, yeh Jone McEnroe hain. Isko bahut demand hai.”

In the film Amelie (French, again), there is a character called Dominique Bredoteau. He is a lonely man estranged from his family. Every Tuesday, Bredoteau buys a chicken and roasts it with potatoes. Once the chicken is cooked, he hungrily cuts it and reaches inside to pick out chicken oysters, one of the bird’s delicious parts. In magazines, the equivalent of oysters are glossy centrefolds. These are easy to steal. You just have to quietly pry the pages off its staple pins and slip the section into another magazine. Then you pay for that one and leave. I pulled off quite a few such heists, until one day, the inevitable happened. I got caught, and escaped a thrashing only by virtue of being a kid.

Sportstar was also the catalyst for my choice of sports journalism as a career. As a student, I was not bad but was distracted. The fundamental problem was I had no interest in commerce, the stream I graduated in. Recently, at the office of a chartered accountant friend, I picked up a book on accountancy and taxes. My spontaneous reaction was a wince. Debit this, credit that. What the duck. Sport, on the other hand, was joy, escape and possible livelihood. I had played a bit myself and read and watched enormous amounts. Besides, I had grown up reading the dispatches of Sportstar staffers from around the world. Not a bad way of earning your bread and bottle.

The writer I followed above everyone else was Nirmal Shekar, The Hindu’s tennis specialist. He went to Wimbledon every year and claimed to know and even dine with superstars. He had a flowery writing style, which to young minds seemed impressive.

He often started articles with quotations of philosophers and intellectuals. (One knows now that some of the things these intellectual heavyweights said were hot air, complicated sentences passing off as profundity.) Many sports journalists of my time were inspired to get into the trade because of Shekar or R Mohan, Sportstar’s chief cricket writer. When I started touring myself, I was curious to see the faces behind the names. I first saw Nirmal at a Davis Cup tie in Jaipur in 1996. I saw Ayaz Memon at a party at the Leela in 1994 for Superhit Muqabla, the popular Hindi songs show on Doordarshan. He was dancing. I met R Mohan before a rained-off one-day international between India and New Zealand in Goa in 1995, an unassuming man in simple clothes. Harsha Bhogle was generous with his time when I approached him as a collegian seeking guidance. At that time a boy named Rihen Mehta had swum the English channel. Bhogle asked me to meet Mehta, write a story and send it to Sportsworld. The story wasn’t used, but it was a good drill. And I didn’t mind the excursion to the Mehtas’ lavish Malabar Hill apartment and a nibble of expensive mithai.

One evening a few days ago, I was clearing out a cupboard. In the bottom shelf was my collection of sports magazines, perhaps around 300 in number, some of them dating back 30 years. I find nostalgia a rich emotion, but 30 years is too long a time. It can’t be healthy to retain something from that far back in your life. Under the hot yellow light of an overhead bulb, I decided to get rid of the collection. Then I flipped open a Sports Illustrated issue from 1999. I had bought it from a raddiwala. The original owner of the copy was Moothedath Madhavan of Denver. His name and address was on a label in the bottom left corner of the cover. The copy had somehow washed ashore in India, and ultimately into my hands. It was a special issue in which writers wrote about a past event they would have liked to witness. Each piece was accompanied by art work, not photographs. It was truly a collector’s item, with rare content. In a piece on Althea Gibson, the first coloured tennis player to win a Grand Slam, Michael Bamberger reveals fascinating information about this seminal figure in sport. As a girl in Harlem, Gibson sometimes rode the subway aimlessly at night to escape the beatings of an alcoholic father, and immersed herself in sport during the day. During her historic triumph at Wimbledon in 1957, she herself spent the evenings drinking whisky and smoking. She slept till late, almost till match time. Rick Reilly writes about Francis Ouimet, a young caddie who miraculously won the 1913 US Open golf. Ouimet was 20, and his caddie 10.

I also found a 1994 copy of Sportstar which had an advertisement for Ray-Ban sunglasses featuring the model Rachel Reuben in a swimsuit, and recalled how coveted that page was years ago. In another issue was a picture of Bishan Singh Bedi doing something you wouldn’t expect him to—skipping. I did discard about two-thirds of the magazines, but could not get myself to part with the rest. ‘For a ringside view of the world of sport’ was the promise of Sportstar. But to readers now, the magazine and others like it are a ringside view of their past.