For the Love of Polo

In Rajasthan, the game of kings is an aspirational recreation—for queens, rich tourists and poor mahouts alike. But riding a horse is not a skill that can be hired for a day, and therefore there’s also chauffeured polo, atop elephants and camels. 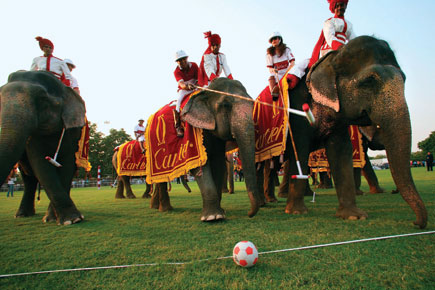 In Rajasthan, chauffered polo, atop elephants and camels, makes up for lapses in horse riding skills.


Fusion is in. Not only in the guise of fusion wear and fusion cuisine, but also the likes of fusion entertainment. And why not? Fusion entertainment, in the garb of alternate forms of polo such as elephant and camel polo, is a fine blend of a heady sport that decades ago was the sole privilege of kings and cavalry members, and animals that have traditionally been closely associated with Rajasthan.

Elephants have since times immemorial represented the might of emperors. In Rajasthan, the princely state of Jaipur especially has a long and colourful association with the pachyderm. Camels, popularly called ships of the desert, are also abundant in the arid terrain of India’s desert state. So if you think of it, elephant and camel polo are a great way to showcase the culture of Rajasthan while allowing tourists to have some fun—more so if you consider the significant contributions made by its rulers to the sport.

Polo is known to have originated in ancient Asia—the Mongols are passionate about the game even today—but the earliest recorded polo game in India dates back to 1857, played in the princely state of Manipur. And although Indian polo buffs may be ignorant of this piece of trivia, every self-respecting Indian polo enthusiast gloats about India’s sunniest polo season—the English summer of 1933 when the Jaipur team, led by the late Maharaja of Jaipur Sawai Man Singh, made a clean sweep of six major British polo tournaments, scoring a total of 104 goals and conceding only 43.

The very British yet (in this instance, at least) not so propah Punch magazine honoured the feat, and arguably, added insult to injury by carrying a caricature depicting the Jaipur team astride an adorned elephant with the English teams scattering in front. The image was aptly captioned ‘A Jaipur Allegory—Look Out, The Elephant’s Coming’. The cartoon may have been a metaphor then, but in the here and now seven decades on, it seems an equally fitting tribute that tourists are drawn to Jaipur to play or witness, depending on their inclination, elephant polo.

Horse polo is fast and exciting, yet it requires adeptness and a riding proficiency that few tourists possess. In the absence of these skills, horse polo may be a tad dangerous, especially if played with experienced polo players. And yet, tourists long to have a feel for this game of kings. ‘Let other people play at other things. The king of games is still the game of kings,’ supposedly reads an inscription on a stone tablet beside the polo grounds south of the fabled silk route to China.

Enter elephant polo—a slower, safer and shorter version of the game with some history to boast of too. “When elephant polo was introduced in the courts of Maharajas,” elucidates Maharaj Narendra Singh, India’s FIP (Federation of International Polo) ambassador and member of the royal family of Jaipur, “it was probably done to give the ladies a feel of polo.”

It’s not as though the women of royal families were dissuaded from playing the sport. But as the galloping pace of horse polo proved too exhilarating for most, the kings turned to the meandering gait of an elephant to give their women a taste of the game. An aspect of elephant polo that appealed to the maharanis of yesteryears and attracts greenhorns even today, is that it takes two riders to play the game. Bhupendra Singh, marketing and communications head, Royal Jaipur Polo Foundation describes the teamwork involved: “The mahout steers the animal while the polo player holds the stick and strikes the ball. Relinquishing control of steering to an expert, who is better acquainted with the moods of the elephant, translates into one less thing to do for a novice as well as improves the odds of scoring a goal—which is pretty much the highlight of a polo holiday.”

Perched on the head of his mount, the mahout also gets a chance to participate in the game, something he could never have done otherwise, as the economics of polo ensure that the sport remains a pursuit of the elite. To understand this better, take the most serious form of the sport—horse polo. A typical game is composed of four segments of seven minutes each, with 12 moments of rest worked into the 40-minute format. Each segment is called a ‘chukker’. The chasing entailed in the seven minutes of each chukker is enough to tire even a thoroughbred. For this reason, polo players bring up to six horses for a championship event. Ordinary ponies are not good enough, serious polo players train thoroughbreds for the game. Consider that a thoroughbred polo horse costs in the range of Rs 1 lakh to Rs 20 lakh and costs another Rs 2 lakh or so to maintain on an annual basis. Add to that the cost of training and transportation to match venues, and even a back-of-the-envelope estimation will prove that horse polo is, indeed, a blue-blooded sport.

From an economics point of view, elephant polo involves big money too. An elephant costs anywhere between Rs 70,000 to Rs 5 lakh and up to Rs 4 lakh to feed over a year. But who keeps an elephant as a pet? And even those who keep elephants as work assets, such as the mahouts who give tourists rides in the grounds of Fort Amer in Jaipur, use the animal to earn their livelihood. Not for them is the luxury of playing elephant polo.

Ramlal, who works his elephant in the grounds of Fort Amer, has seen enough horse polo matches to understand the intricacies of the game. But in spite of owning an elephant, he couldn’t indulge in playing the game of polo, even if it was all that he ever wanted.

“My mount (elephant) is my means to earn a living. It earns its keep too. Where is the time to play polo?” he says.

Ramlal’s time comes if and when a group of tourists cares to indulge in the game. Then, assured of a days’ wage, post-game refreshments and a gift to boot, Ramlal is free to concentrate on his imaginary steering wheel. Aware that his steering calibre bears heavily upon his co-player’s chances of success, Ramlal enjoys every such occasion to bask in the limelight—on the field instead of in the stands watching others have all the fun. Needless to say, Ramlal cherishes every such opportunity to play as the maharajas (or should that be maharanis?) did.

On his part, Bhupendra believes that elephant polo would receive a boost if more tourists clamoured to play the game: “The cost of arranging a fun game for a group of say 20, in a setting reminiscent of the days of yore, would come down if we were to receive more calls. But at present, I don’t receive more than one query a month, perhaps because tourists are not aware that such arrangements may be made.”

Five hundred and seventy kilometres away towards Jaisalmer, where the heat and dust of the desert would exhaust any thoroughbred horse or elephant, villagers used to enjoy a friendly game of polo, albeit on camels. Regretfully though, the sands of time have all but covered up the shallow hoof prints of polo-playing camels.

CR Parihar, a native of Rajasthan, reminisces: “Life used to be simpler, even for villagers. People used to have more time on their hands, to indulge in a game in the evening. Homemade stick-like contraptions worked fine. It was all for fun, poor villages playing the game of kings,” he recalls.

The number of villagers playing camel polo may have dwindled but it is still played. And whenever it is played, it still brings forth cries of merriment. The game can still be seen during the Jaisalmer Desert Festival, in areas around Osian (a resort located on a diversion off the main Jodhpur-Bikaner Highway) and in the City Palace or the Raj Mahal Palace Hotel in Jaipur, under the guidance of Maharaj Narendra Singh.

Traditionally, villagers played camel polo solo. But as Parihar adds with a chuckle, “Riding a camel is not everyone’s cup of tea. And it takes good judgement to accurately strike the ball.” Most tourists dodder just riding a camel, imagine having to ride it, hold a stick and strike the ball. No wonder that most opt to be led by a camel handler during the game, much akin to elephant polo.

Sounds like fun? Fun is what alternate polo in Rajasthan is all about. An amateur elephant or camel polo player will not earn stripes nor acquire a coveted polo handicap. But then, who cares when you’re playing the game of kings?