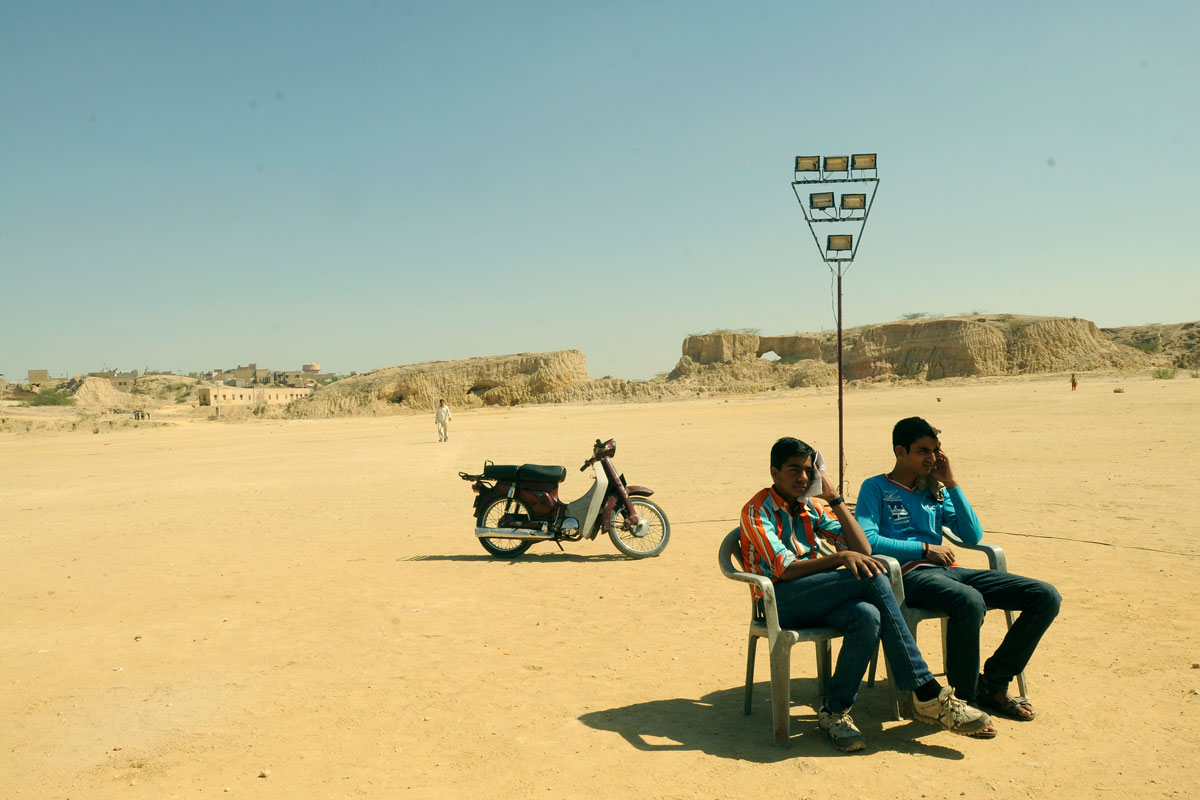 
I arrived at Momasar a bit weary from the six-hour-long road journey from Jaipur. The villagers gathered for the evening concert were restive, a bit disruptive. I wondered if this year’s Kabir yatra would live up to the expectations built up by the high of the last one in Malwa.

Fittingly, it was Prahlad Tipaniya, who has engaged audiences in Malwa as a folk singer of Kabir’s works for over 20 years, who laid to rest my doubts. There is a compelling quality to his presence on stage. He talks, he sings, and he’s passionate about his subject. He holds attention. I feel my disturbed mind quieten enough to begin to listen. And I realise that listening is the journey in this yatra.

Cool desert nights were the setting for the music of the Rajasthan Kabir Yatra, organised by Lokayan, based in Bikaner, and supported by Kabir Project, based in Bangalore. The yatra brings together diverse musicians and an even more diverse set of yatris, who travel in buses from one location to another for nightly concerts in different villages. This year, more than 200 people from across the country and abroad joined in for music inspired by Kabir.

The very next night, in Napasar, we had our first encounter with Gavra Devi. Now Gavra Devi is a phenomenon. She is close to 65, and has been blind since she was ten days old. One might take these to be the most important facts about her, but they only lend a peculiar poignancy to her remarkable character. Without being able to see them, she knows how to enrapture her audience. She is animated, yet totally natural on stage. She holds forth with that deep, full-throated, powerful voice that so many Rajasthani women singers seem blessed with (someone whispered in my ear that it’s the sand in the food that does it).

Everywhere we went, I saw audiences warm to her, cheer, whistle and applaud. In Diyatra, she was even brought back at 2 am on popular demand. On and off stage, she has a devilish sense of humour. She cultivates a bantering relationship with her audience, who love her unabashedly (a younger woman performer would receive a different response). She displays a mocking knowledge of English that extends from 1 to 7 (“1,2,3,4,5,6,7!” she frequently bursts out in response to people who speak to her in English or those who say clever things). After her performance, she doesn’t leave the stage. She just moves back, makes space, and from this vantage point, revels in the performances that follow through the night. It was a sight to see her sitting behind other musicians, clapping, swaying and grinning.

Three buses had been marshalled to transport the swarming throng of yatris from place to place. Each day—in the morning or afternoon—we travelled some 100 to 200 km to reach the next destination, the next village, the next concert. Each bus  ride was an event in itself, especially as the singers travelled (and stayed) with us, and would typically divide themselves between the three buses. And most of the way, as it seemed, they just could not stop singing. Relating to them as co-travellers or cohabitants of your room was more fulfilling than just seeing them perform as artistes on stage.

One early journey I will not forget was aboard a sleeper bus, with music emanating from two levels. Mahesha Ram, Mooralala Marwara and Kaluram Bamaniya, three singers from Jaisalmer, Kutch and Malwa, respectively, happened to be together, and prodding one to sing was enough to set off all three. In a rare moment, both Mooralala and Kaluramji sang Vari jaun re, a bhajan originally sung by Mahesha Ram, in front of him. Everyone sang along, and this particular bhajan, a ballad in praise of the arrival of the satguru as the beloved, echoed all through the yatra, becoming a sort of anthem.

The night in Baba Gangainath Dham in Jamsar can be best remembered for its chill. With the vast desert expanse all around, the cold had no barriers to stall it from biting flesh and skin. As the night got colder and colder, people fetched razais to cover themselves. But the music didn’t stop. Nor did the listening. Or dancing. Thankfully, tea arrived as succour.

The next evening’s concert was in the very scenic amphitheatre-like setting of the grounds of the Dharnidhar Mahadev Mandir. Here, Bindhumalini and Vedanth from Chennai burst upon us, rendering Kumar Gandharva’s nirguni Kabir in a lively, enticing new form, with guitar for accompaniment. They made more alluring the maya of music even as they sang of maya being mahathugini (a big fraud).

Every now and then, wherever we halted, we would endeavour to have an informal session—satsangs by individual singers just for the yatris (as opposed to the evening concerts where the local audience was in force). These smaller sessions were designed to go deep, and they did. Three powerful ones stand out. One with Gavra Devi, where we learnt about her life; another with Parvathy Baul from West Bengal; and a third with Abdullahbhai and Musa Para from Kutch, who came just as yatris but were clearly (and are) singers in their own right.

On a sunny morning in an old haveli of Napasar, Abdullahbhai launched into his impassioned explications of the Sufi poetry that he and Musa Para were singing. It was dramatic and enthralling as he spoke of how, when a gust of wind strikes a big wave in the ocean, drops of water get hurled into the air for a brief moment before they return to their source. We are each that drop of water, he said,  just a drop of water, separated for an instant.

Parvathy’s informal session took place at the most scenic stop of the yatra—the ‘dhuni’ of Jageri. Piles of dust stretched out in the distance on all four sides of the temple, mud quarries for brick-making further away. There was a lotus pond with low water, which invited music later in the evening. But most of all, it was the late afternoon light, golden to the point of being surreal, that captivated us.

Parvathy held us for over three hours. She sang and spoke of surrender. In the first song, she spoke to her mann, the mind, the inveterate traveller, urging it to return to its nija niketana (real home). In the second, she reassured her audience that anxiety is part of the game, urging us not to worry about worrying, and sang of two kinds of chinta—that for the world, and that for what teaches us to live in the world. Her session led to an intense discussion about the place of the body, particularly sexuality, within the spiritual quest. Parvathy maintained that we have been given bodies for a reason, that there is a process to awakening, and that we must carry our bodies along in this quest, not seek to deny them, while Prahlad Tipaniya and Abdullahbhai approached the topic from more traditional understandings.

That night, in Diyatra, Parvathy’s scheduled performance was a no-show due to technical reasons, given the particular way she performs (swirling and playing two instruments even as she sings). Gopal Singh Chouhan, the chief organiser who worked so hard to put it all together, was devastated. Parvathy philosophised that yatra (travel) has the same root as yatana (travail). And so the yatra must have its painful moments as well.

We returned to Bikaner for the finale. Things were at an end, and falling apart. Prahladji got sentimental; he gathered whatever yatris he could find, and sang with them of meetings and partings. Later that night, Shabnam Virmani sang Yugan yugan ham yogi to remind us how we have been seekers all through the ages. Parvathy sang of Radha merging with the dark river, in which she sought her Dark Beloved. These were memorable notes to end what was a many-splendoured journey.