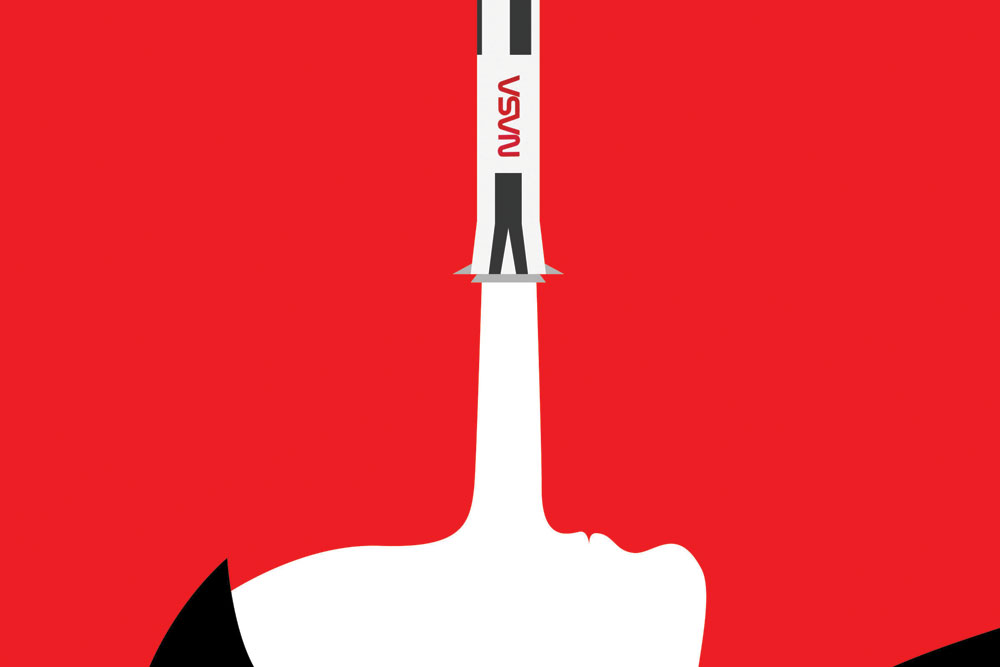 
FOURTEEN-YEAR-OLD DIKSHA Shinde does not answer the phone until almost the last ring. Given the stressful situation she finds herself in, it comes as no surprise that she is screening her calls these days. A few weeks ago, a national news agency put out a report stating that Shinde, who lives in Aurangabad, had been selected for a prestigious fellowship offered by the National Aeronautics and Space Administration (NASA), based on a paper she had submitted on the agency’s website. Within a day, Shinde’s claim, the basis for the news report, was in tatters as experts and social media users pointed out discrepancies.

“There has been a lot of confusion,” says Shinde. “I have not been chosen as a fellow. I am a panellist on NASA’s MSI Fellowships Virtual Panel. I will be selecting the participants for this fellowship. I have already sat in on two panels where I am the only Indian,” she says. Turns out that Shinde had been selected but based on false information regarding her background and credentials. NASA had sought applications through a third-party service and Shinde, who at 14 identifies herself as a “Doctor” on LinkedIn, the career networking site, had furnished fake achievements. She had also identified herself as a “researcher” for NASA on the site. The account has now been taken down. “It was hacked,” says Shinde. Why did a 14-year-old feel the need for a LinkedIn account anyhow? “Because that’s where I share links to my papers.”

Long-time social observers would have reacted with wry cynicism to Shinde’s claim and its eventual debunking. The ‘NASA genius’ scam in India is by now quite a few years old. Every few years a young person emerges with a fantastic claim, almost always centred around NASA’s recognition of his/her talent and the riches they have been promised. Before Diksha, there was Sataparna Mukherjee from West Bengal who claimed that NASA’s Goddard Institute for Space Studies was funding her PhD at Oxford. The benevolence was a result of a ‘two-line theory’ on black holes that Mukherjee had posted on a Facebook group. NASA denied her claims. Then there was the Jaipur-based Monark Sharma who claimed to have worked at NASA and so impressed was the agency by his intellect that they had offered him a green card. Never mind that US citizenship is a prerequisite for working at NASA.


What makes ordinary young men and women, almost always from non-metros, make these claims every few years? More importantly, in a country where IITs could well be stand-ins for the most revered places of worship, why the hankering after NASA and its seal of approval? There is no one answer to these questions. Answers instead are to be found in a curious mix of globalisation, internet penetration, aspirations, lofty ambition and a genuine lack of information. Tying all these disparate strands together is an education system that places far more premium on learning by rote. A system which places science on a pedestal, but only as an abstract concept. Research, what is that?

“The asymmetry between the metro and non-metro education institutions is an old story in India,” says Sanjay Srivastava, a professor of sociology at the Institute of Economic Growth in Delhi. A reasonably assured path to a good life based on education is a dream nearly every Indian has, but is accessible to only a few. “In India even today, we have either a handful of good institutions or most of very poor quality, while the growth of aspirations thanks to the internet has been phenomenal. There are few avenues available to the vast majority for their aspirations to be fulfilled.”

The traditional route to success in India, even today, is through an engineering college, with the IITs still being the holy grail. However, this is not meant to be confused with an appreciation for the different fields of engineering and a desire to excel in them. The pursuit of engineering, amongst all the different applications of science, is mostly due to the potential for economic improvement, as well as for the validation of one’s academic brilliance. “We have a very strong professional conversation around science and technology, but not a cultural one,” says Jahnavi Phalkey, founder director of the Science Gallery in Bengaluru. She cites conversations over the years with students at premier engineering colleges where their rank in the entrance examination is the sole determinant of the stream they are pursuing. Conversations around research and projects are limited. According to Phalkey, the system is geared towards the pay package a student will land on graduation and the eventual standard of life that will flow from the degree.

But for all our hankering after an engineering or medical degree, we still betray a lack of understanding over the basic difference between science and technology. We take great pride in the country’s standing as an IT giant, but the fact is that most Indian IT companies are not involved in the development of software. Instead, they use ‘talent’ to write code. Similarly, we boast of generic pharma companies, but had to rely heavily on AstraZeneca for the Covid vaccine. “There is little patience for the checks and balances of research,” says Priya Hasan, a professor of physics and astronomy. Priya and Najab Hasan, also an academic, run Shristi Astronomy that aims to spread awareness about astronomy, in Hyderabad. “In our society today, we only value the external standard of living. We think science is a shortcut to that,” she says.

From basic courses to modules for even the training of teachers, Shristi Astronomy aims to bridge the lacunae that exists as far as astronomy is concerned in the Indian education system. Hasan feels there is very little exposure to astronomy research in India, despite a lot of interest in the subject. Access to the internet has opened a world of possibilities for young students but, on the ground, there are few avenues to pursue them. In metros, children who go to elite schools will still find avenues, but the rest are left to fend for themselves.

Take the case of Diksha. Her exposure to the field of cosmology is through the works of Stephen Hawking, but beyond that she has not found any avenues to further her interest. Her ‘paper’, which she submitted to NASA, was on “Black Holes and God”, and Shinde claims she did “lots and lots of research for the paper. I would spend 12 hours a day just researching it.” When pressed to cite reference material for her research, Shinde only cites Hawking’s name. She is not able to even name all his works. The Astronomical Society of India felt compelled to put out a statement when news of Shinde’s ‘selection’ broke. According to the society, the choice of her topic alone would lead to a rejection of the paper in the initial scrutiny. “Scientific publications demand rigorous physical evidence and analysis. Any argument connecting two unrelated concepts like black holes and God will be just a speculative play on words, which doesn’t qualify as physical evidence.” Requests from Open to Shinde to share her paper went unacknowledged.

In all probability, Shinde is a bright enough student who excels in the learning by rote tradition rampant in the Indian education system. She is not the only one. Tathagat Avatar Tulsi, a ‘child prodigy’, managed to land a teaching gig at IIT Bombay before he was unceremoniously fired in 2019. But for the Dikshas and Sataparnas of India, there is a huge gap between desire and accessibility, which can often be exploited by unscrupulous middlemen. There have been cases of parents being duped into parting with their hard-earned money on the promise of sending their child to NASA. Predatory journals that seek money in exchange of publishing papers are a real scourge. In the case of Diksha, her paper was submitted to The International Journal of Scientific and Engineering Research, which is alleged to be one such predatory journal. These journals publish “anything and everything given to them without any quality checks. They just make money by charging authors,” cautions the Astronomical Society.

It is also important to consider the role played by the family in perpetuating this hoax, as overarching ambitions of parents who project their desires onto their children. Shinde’s mother Ranjana, however, says that both she and her husband are Marathi teachers who had no idea about Hawking or astrophysics. Whatever they know about the subject, or even about NASA, is because of Diksha and her interest in the subject. “To be honest, we were not even keen to release this news. It is only after she attended a couple of meetings of this panel that we decided to tell the media. People need to encourage young talent instead of looking for reasons to pull them down,” she says.

The only way to nurture genuine interest and encourage children in the sciences is outreach. There are few resources on the ground, and especially outside of major cities, for students who are keen to pursue different fields of study like astronomy and astrophysics. Parents should be curious on behalf of their children, look up local science centres, visit planetariums. “Children don’t realise if they are being conned, but parents need to be more vigilant. Rather than falling prey to middlemen with tall claims, I would ask them to look up the Vigyan Prasar website, which has plenty of online material. It may not be jazzy as a NASA website, but it does the job pretty well,” says Hasan.

A bit of soul-searching may also be required from the media, whether at the local or the national level. The willingness to believe a global success story which ticks all our aspirational boxes points to an innate desire to be accepted as worthy, but by standards set by someone else. Aspirations have skyrocketed in India. At the same time, a child’s choice of career should not just be acceptable, it should also be respectable. Science bridges the gap, but only in its instrumental avatar of technology. The fact is that the best research will not have any immediate real-world applications, and we measure success in terms of inventions. “The pursuit of theory is intellectual; in a child, it is even a marker of being a prodigy, but it won’t be reflected in career choices. Those will be safe,” says Aniket Sule, chairman of the Public Outreach & Education Committee of the Astronomical Society of India.

As more and more youngsters are exposed to ideas from across the world, as their dreams burgeon and aspirations grow, we are likely to hear of more and more such ‘geniuses’ who will eventually fade into obscurity. Whether there really is talent is a question few ask. A shift in pursuing any field of science for the joy of doing so rather than seeing it as just a career option will go some way in checking that. But in a country where the burgeoning middle class encompasses households on varying scales of income, even that is a luxury.

As for the burning question of why only NASA, and why not, say ISRO or even IIT, Sule has a straightforward answer: better recall value. “People know NASA. ISRO, not so much. The stamp of approval has to come from [NASA].”