The globalisation of South Indian cinema began with Rajamouli 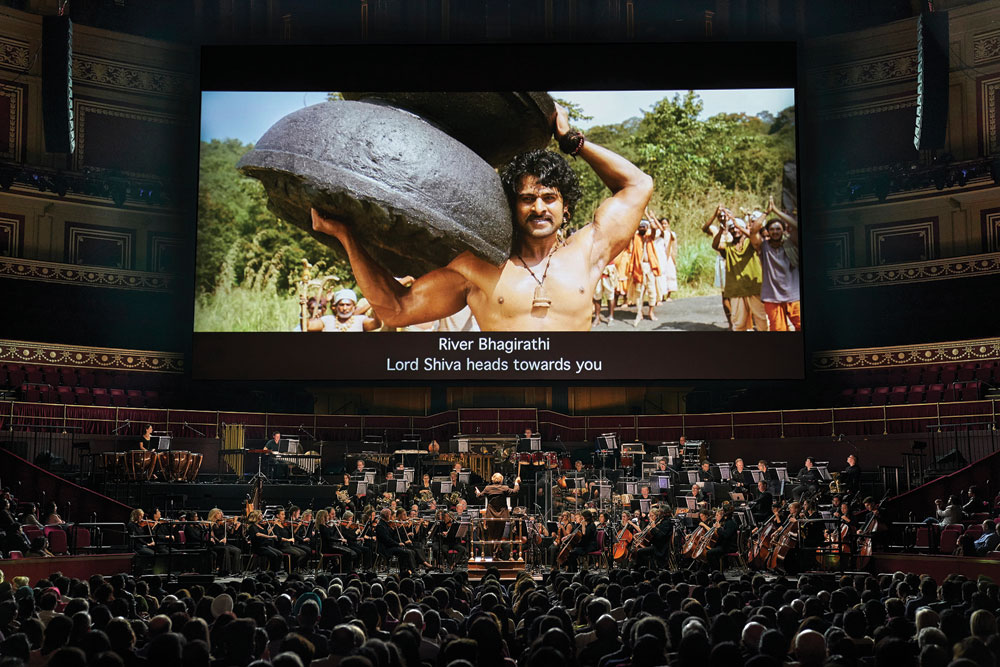 Baahubali: The Beginning being screened at the Royal Albert Hall in London, 2019


October 19, 2019. Baahubali: The Beginning (2015, direc­tor SS Rajamouli) was the first non-English film to be screened at the Royal Albert Hall, London. It had a live performance by the Royal Phil­harmonic Concert Orchestra conducted by Ludwig Wicki of MM Keeravani’s background score interspersed with the originally recorded songs.

I had been invited to chair a talk with the cast and crew, and so arrived early to meet the actors, Prabhas (Baahubali), Rana Daggubati (Bhallaaladeva) and Anushka Shetty (Devasena), MM Keeravani (mu­sic director), Shobu Yarlagadda (producer) and SS Rajamouli (the director).

Although I’ve met many Indian film stars before, Prabhas was different, being somewhat shy and diffident and perhaps even slightly daunted by the experience as well as dealing with my alien accent, while Anushka and Rana were relaxed, friendly, and charming, sophisticated met­ropolitan figures. Rajamouli could have been some Ivy League professor, attentive and alert, clearly aware of the wisdom of his decision to attend such a major event. His choice of dress—an elegant white dhoti and salmon-coloured kurta—was pitch-perfect. There were some family members who weren’t trying to be cool by hiding their excitement, but taking selfies in an unaffected and refreshing manner.

We walked onto the stage for a re­hearsal. I was quite overwhelmed to see this iconic massive structure in all its glo­ry. The building from its name onwards could scarcely be more imperial, the home of the Last Night of the Proms where ‘Rule Britannia’ and ‘Land of Hope and Glory’ are performed. The crew took their own photos while MM Keeravani examined the orchestra’s scores and the musical setup with professional eyes.

As it was, my questions didn’t matter much as it was difficult to speak above the roar of the fans of Prabhas, which would deafen any football crowd. After we left the stage, they went to the royal box while I joined my husband and my PhD student, Rakesh Sengupta, in a box. The 6,000-plus audience was mostly of Indian origin, al­though there were also non-Indians, in­cluding several Japanese women, dressed in saris. The atmosphere was redolent of a wedding, a joyous celebration, and I chat­ted with people in the audience about their love for the film and why they had come to London from all around the world to witness this major event.

During the screening, the level of audi­ence interaction with the film recalled the glory days of the single-screen (pre-multi­plex) cinemas of India, with whistling and shouting every time the stars gave snappy speeches, cast sharp looks, or looked beau­tiful as they danced. When Baahubali (strong arms) flexed his muscles so much that his biceps broke his armlet, the crowd went wild. Yes, gentle reader, me too.

There were two slight disappoint­ments. I was sorry they screened the Hindi version even though I understand only Sanskrit-derived words in Telugu, but like Tamil, the language sounds so beautiful, particularly when sung, like Italian in opera.

And I wanted Kattappa (Sathyaraj) there. What a character he is, and what an actor!

The thousands of fans went out into the London night, faces shining with hap­piness at the story of the mythical King Baahubali, victorious in overthrowing the usurper, setting up just rule in Mahishmati, somewhere in India, sometime in history (the presence of a Muslim character shows it is not set in ancient India, but there is little else to date it other than in a premodern era). The kingdom of Mahishmati was right there in the former imperial capital, now metropolitan, multicultural London.

SS Rajamouli (am I the only one for whom SS means Steam Ship?) is perhaps India’s most significant director today. He can make a film in a south Indian language that, when dubbed, becomes a pan-Indian film that can also be enjoyed overseas. I don’t know what the audience profile is but the film contains everything from romance, the family melodrama to action wrapped up in breathtaking CGI and visuals. Rajamouli has a clear com­mand of all elements of the film, conduct­ing his orchestra perfectly from the sto­rytelling and building of characters (the story is by his father, Vijayendra Prasad, though Rajamouli wrote the screen­play), visuals (KK Senthil Kumar, the cameraman; Sabu Cyril, the designer), the music (Rajamouli’s cousin MM Keeravani/MM Kreem). The film has a number of visual set pieces and narrative climaxes but they are fully integrated into a carefully paced narrative.

The actors give strong performances without any weak links. Prabhas is strik­ing for presenting an image of south In­dian masculinity, unlike Hindi cinema’s north Indian heroes who are very fair. He is also not intimidated by the strong wom­en of the film but is a devoted lover as well as a loyal son who has several mothers— Devasena, his birth mother; Shivagami (Ramya Krishnan) who saves his life at the cost of her own; and Sanga (Rohini), his adopted mother. He has the realistic good looks and charm of the boy-next-door until he displays his muscular per­fection, before distracting us again with his seemingly shy, then dazzling smile.

The music of MM Keeravani is one of the great glories of the film, a mixture of In­dian tunes, Western orchestration, rock—

all in one—a grandiose style suited to or­chestration and the background score was given full justice at the Royal Albert Hall.

It’s hard to say to which genre the Baahubali films belong. They mix the mythological, the epic, the costume dra­ma, and the fantasy. Although there are miracles and references to Shiva, the icon­ic image of Baahubali as Shiva carrying the huge lingam, and the story of righteous evil kings and scheming family members are shared by the Mahabharata or the Ramayana, it is not a religious film. It is perhaps an itihasa, the Indian name for the historical film genre. Itihasa in Sanskrit means “thus indeed it was”, and seems a good term for this genre.

All aspects of the film are very Indian, yet there are many references to Western films, from Gladiator (2000) to The Lord of the Rings (Series, 2001-03). Perhaps these scenes decolonise Hollywood, their mim­icry paying what Homi K Bhabha calls “sly civility” by recreating them in a new ver­sion of Indian culture. Is it too much to think of the raising of a statue in this era when statues, at least of Rhodes and oth­ers, must fall?

Yet, the inspiration behind the film is In­dia, from the Mahabharata to the contem­porary film. The family melodrama of the adopted son finding his true identity, res­cuing his mother, and avenging his father could be the plot of any of Amitabh Bach­chan’s “Angry Young Man/Vijay” films.

Some viewers saw problems in the film, such as the so-called ‘rape’ which is a fantasy of seduction in which Baahub­ali falls for the warrior princess, Avantika (Tamanna Bhatia aka Tamannaah), re­moving (some of) her clothes while she enjoys but resists, while others were un­comfortable with the battle with dark ‘savages’ who speak an invented language, Kiliki, with clicks found only in southern African languages, known to most of us from Miriam Makeba’s ‘The Click Song’, and used in ‘Wakanda’ in Black Panther (2018), which is actually Xhosa.

One of my favourite moments in the film is the song ‘Dhivara’, where Shivadu climbs the waterfall that connects the land where he is brought up with the city of Mahishmati, his stolen birthright. The song begins with him hearing Avantika singing at the top of the waterfall, covered in blue butterflies. She lip-syncs playback but Baahubali per­forms his action sequences to the male playback as he climbs the waterfall, grap­pling, swinging on creepers like Tarzan, falling through day and sunsets into the night, as she flies and floats in and out of his reach. When they are finally united at the top, she vanishes, leaving only blue butterflies.

The performance at the Royal Albert Hall showed that Rajamouli can hold the audience’s attention for over two-and-a-half hours and get them to come back to see a second Baahubali film. After making his name with the reincarnation films Magadheera (2009) and Eega (2012), the two Baahubali films established Rajamouli as a leading director. He is now back with the delayed RRR, the story of two heroes struggling against colonial rule. It is al­ready a huge hit and SS Rajamouli is now widely regarded as one of India’s greatest directors. He is keeping movies in the cin­ema hall, as well as the Royal Albert Hall, with his style that resists the small screens we have all got used to over the pandemic. Rajamouli’s impact on Indian cinema is yet to be assessed, but he is perhaps primar­ily responsible for galvanising the interest in south Indian cinema that is now being watched all over In­dia, including within the last year, Minnal Murali (Malayalam), Jai Bhim (Tamil), and Pushpa (Tamil). Jai Mahishmati!