A Prayer for My Sister

She lives in a cloistered world of silence and submission. Endurance is her supreme prayer. She is out there on the street today, demanding justice for the one who has allegedly been raped by a bishop. Pitted against a patriarchal church and an indifferent state, a nun’s life is a lone battle. And it all returns to her body 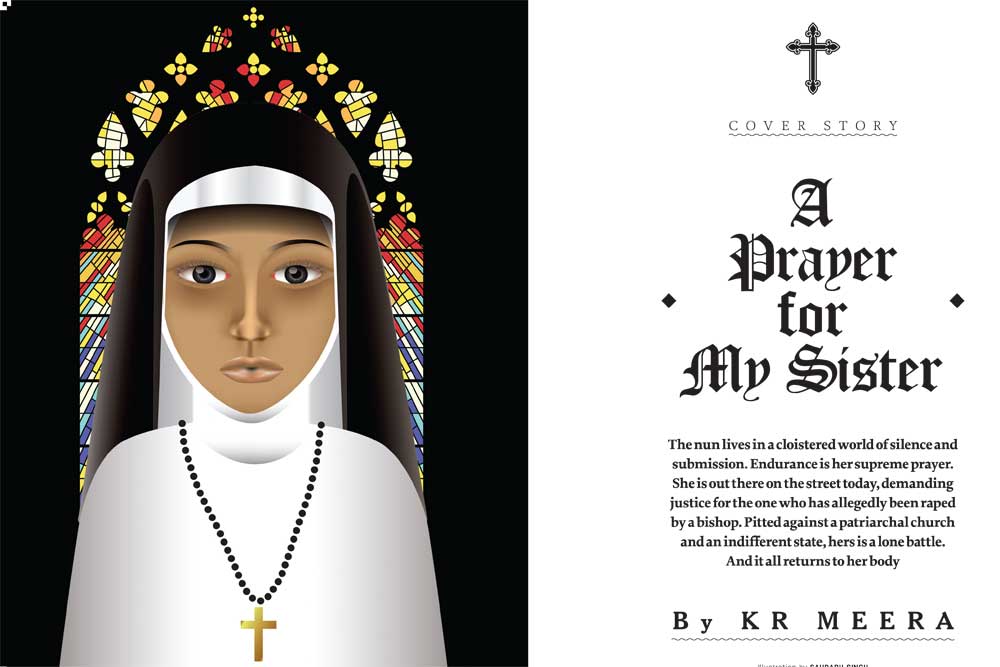 As soon as she died, Sister Alphonsa sighed in relief and rose from her bed.
She floated over the sick room lightly as thistledown and glanced at her dead body.

Other nuns, her companions, are seated around her body, weeping and praying.
Sorrowfully, they close her eyes she forgot to shut when she died. Sister Bernadette is
wiping her tears with one hand even as she sponges the perspiration
of death from Alphonsa’s face with a handkerchief.

Alphonsa smiled. Attending to me was a constant burden to them till I died. Poor things!
Even after my death, they have lot of work to do. Now they have to bathe me and get me ready.
Dress me in a freshly laundered habit. Make a bouquet of flowers for me to hold in my hands.
Make a wreath of silver paper flowers for my head. Buy me a coffin.

BUY A COFFIN for me too.’ I wanted to scream when I first read it. A coffin. To bury my delusions about saints. The fallacies about nuns. About their lives, livelihood and loneliness. Because the picture of a saint I have had in my mind was different. A compassionate sister caring for others, counting the beads on a rosary, chanting the novena, living and dying in peace. She is one who has never been violated spiritually, mentally or physically by those around her.

I was wrong. The path to sainthood is not covered with roses, but by a thick pall. Especially for a Catholic woman. To be a saint, she should be a nun. As a nun, she abandons her body. How easy can that be? Won’t her body chase her like an agonised pet dog thrown out of a car in the middle of a desert? She will have to abandon it once again. This time literally, to find her way to the heavens. How easy will that be? How can she part with something which has come so far with her, a part of her, like the hump of a camel? Doesn’t she owe the body an explanation? Wouldn’t it revolt silently? Writhe eternally on its invisible cross?

The priests rule the roost. The number of male members in the church is less than half the number of nuns, but men wield the power

The body—which might not have completely been seen even by her, never kissed even by her. The body—which was denied even an umbrella in the rain. Have I ever before realised how expensive an umbrella is to a bride of the Lord? Not till I read Sister Alphonsa’s letter in Zacharia’s story: ‘So chetta, if you could give me the money to buy an umbrella, I would be very happy. Since the road is broken, it is difficult to clamber under another person’s umbrella. If possible, please give me five rupees at least.’

St Alphonsa died in 1946, a year before India’s Independence. Has a nun’s life changed at all? Listen to Sister Anupama: “All we have is around Rs 500 a month for our personal expenses.” She is in the vanguard of the protest for justice in the case of the alleged rape of a nun in Kerala. For two weeks, six nuns have been sitting in the scorching sun in Kochi. There are crowds cheering them. Their only demand is justice for their sister and the arrest of the accused bishop. The government delays action. The Church condemns the survivor.

The nun is a berated daughter. A belittled citizen. Suffering is her calling. Bonded labour is her vocation. She manages the schools, colleges, hospitals, orphanages and old-age homes run by the Church. The Church, the largest holder of non-agricultural land in the country, rests on her shoulders. Thousands of hospitals and educational institutions are run on machines oiled by her sweat and blood. The priests rule the roost. The number of male members in the Church is less than half the number of nuns, but men wield the power. The average income of a priest is around Rs 20,000 a month, not counting the many comforts that come with power and position. They handle the coffers. They dictate the norms. In some churches, reportedly, the nuns have to cook, serve, clean and do laundry for the priests. Even in a chapel in the convent, the nun has no right to offer mass. She has no authority to hear confessions.

Power corrupts. Priests are no exception. Scams, land deals and infighting are rife within the Church. More disturbing are the reported sexual offences by priests. We only know of the reported cases. As the survivors are nuns, they cannot complain to the police, for the Church disallows it. There is no democracy in religion. Hence there is no justice for women. All they can do is suffer in silence. Endurance is their supreme prayer.

Not that all nuns are rape survivors, or all priests, rapists. There are many who live up to their vows. Many of them have done incredible social work, bringing change into the lives of the underprivileged. There are many who have quit the convent to start a family. Yet, one thing is undeniable: the eternal conflict of a nun’s body with religion, society and patriarchy.

All the autobiographies of defrocked nuns centre around power. The power over the body, mind and finances. Perhaps all three are one and the same. The social activist Daya Bai, who joined and left the convent in the 1950s, has recounted in her autobiography that she was disillusioned by life in the convent. She openly described how she survived a rape attempt by a priest. She had to burn her breasts to prevent further harassment—because she didn’t dare lodge a complaint. Only decades after she left the convent did she gather the courage to open up.

These nuns are warriors. They come from ordinary if not poor families. They withstand the character assassination, false cases and immense pressure on them to withdraw

N 2009, SISTER Jesme described an encounter she had with a priest in her bestselling autobiography, Amen. She throws light on same-sex relations and suppression of different kinds. Sister Mary Chandy, another nun who defrocked herself, in her recently published autobiography Nanma Niranjavale Swasthi narrates a series of shocking incidents which demonstrate the magnitude of oppression a nun has to undergo; like hitting a priest with a wooden stool to escape a rape attempt. But when it was reported, the blame was put on her. There are details of sexual affairs between priests and nuns. Sister Mary claims that she witnessed a nun trying to flush down the baby she delivered. There is nothing new in the current accusations against the bishop. The only difference is that a nun dared to complain, possibly for the first time in the history of this church.

Is a nun’s battle with her body always about sex? Not necessarily, says a friend who left the convent three months after she joined in 1985. “We were already rigorously indoctrinated that body was sin, and sin was body. For most of us, the convent life was a romantic ideal. We wanted to serve the world and offer ourselves as sacrifice to the Lord. Those were the days before globalisation, liberalisation, the internet and the mobile phone. Also, we were subjected to a rigorous routine and there was not much time left to be worried about physical needs,” she says.

Why did she leave? “Because I found the way they endorsed class and caste differences extremely unbearable,” she replies. “The divide between the haves and the have-nots, the upper-caste and the lower-caste, the aristocratic and the ordinary was phenomenal. It was worse than the world outside. Then why shouldn’t one remain outside?”

This is not surprising, considering how firmly the Church safeguards patriarchy. What is patriarchy without hierarchy? And what is hierarchy without class, caste and aristocracy? So we hear about nuns fighting with their siblings for their share of property. Not for their private needs, but to donate it to the Church. It is their only bargaining chip for a better position in the hierarchy. Even amongst the brides of the Lord, some are more equal than others.

Still, most of the nuns swear that they joined the Church out of a genuine calling. Then why do they bother about hierarchy? Also, the number of nuns leaving the Church is rising. Is it that they have become aware of their sexuality all of a sudden? I glance through the letters Sister Alphonsa had written while bedridden. A letter written to her Novitiate Director Father Louis CMI reads: ‘Have I not told you that it was after I became a nun that I lost the innocence of my soul? May God forgive me for my lapses.’

I find this even more confounding. When one becomes a nun, a bride of the Lord, how can the soul lose its innocence? There is only one possible answer: their age of aspiration, 15 to 17. Most of them come to the convent nurturing a romantic ideal. Their educational qualifications range from Class X to XII. It is after five years of rigorous training to pray, meditate and serve others that they are allowed to take their first vow. So it is quite possible that with the passage of time, their outlook changes. Unlike the novices, ordained nuns have to interact more with the outside world. Technology has brought down a few bricks of the walls which the church has erected around them. Through the cracks, new thoughts and new dreams do usher in.

Hence the revolts, which are as incredible as miracles. A nun sues the Church and gets compensation. For the first time, six nuns start an indefinite protest in support of a rape survivor to demand the arrest of a bishop. Even the priests join them. Most importantly, their families support them. These nuns are warriors. They come from ordinary, if not poor, families. They withstand the character assassination, false cases and immense pressure on them to withdraw (by poor relatives who earn their livelihood from institutions run by the Church). Yet, they hang on. Like martyrs. Like true saints.

The dowry system prevalent among many Christian communities forced many families to send their daughters to the convent. It saved them from disgrace. It saved the girl from the burden of being single. There was no going back. The nun who broke her vows was never accepted back in her family. So she had to live in absolute silence and submission. This has been so for more than a century. True, the Church has been offering opportunities for higher studies and jobs. The salary, expectedly, had to be handed over. Has patriarchy ever allowed women to own money? Women with money and freedom of thought are to patriarchy what the Cross is to Satan.What should we buy them, an umbrella or a coffin?