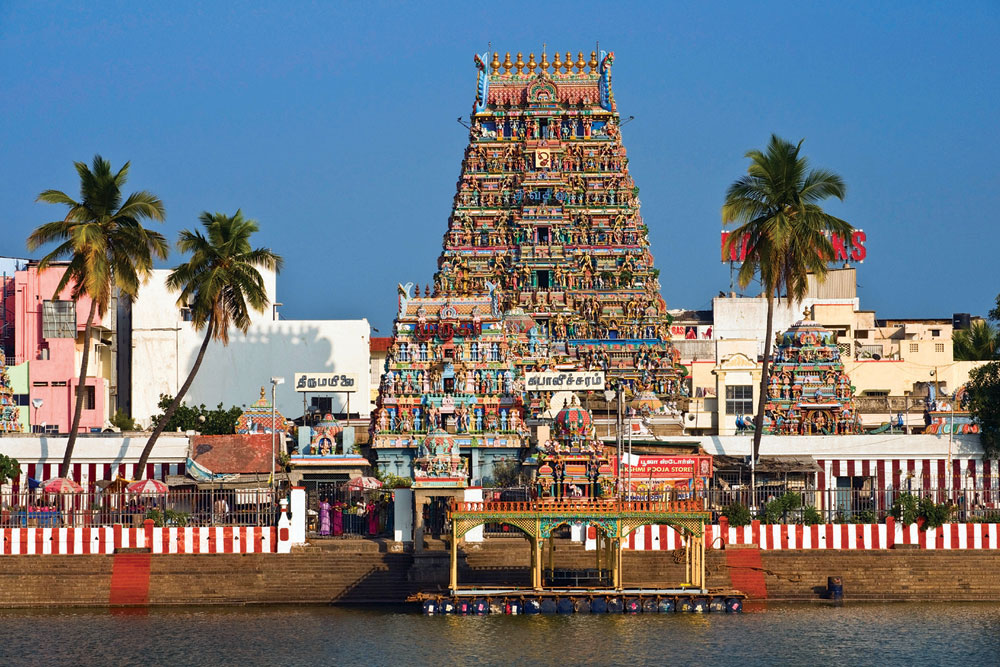 
THE MADRAS HIGH Court has restrained the Hindu Religious and Charitable Endowments (HR&CE) department from going ahead with its plan of monetising temple gold and jewellery. The high court said, “No decision to melt any jewellery or to dispose of any valuable which forms a part of the offerings at the relevant temple should be taken without the trustees thereat being installed pursuant to the advertisements issued.”

The Tamil Nadu government had announced in the state Assembly that it would melt the excess gold in the 38,000 temples in the state into bars as part of the “Gold Monetisation Scheme”. The bars would then be pledged in banks and the money from this would then be used to establish educational institutions in the state, said the government. However, two petitions have been filed by M Saravanan and AV Gopalan in the Madras High Court opposing this move. The advocate for the petitioners, Gopal Sankaranarayanan, said there is no provision in the HR&CE Act to melt gold jewellery donated to temples and, therefore, no state can do so. Thus, he said, there is a constitutional prohibition against melting jewellery donated to temples. Moreover, only a trustee can take the decision. In an interim order, the Madras High Court told the government to hold the melting plans until trustees are appointed to these temples and can give their inputs on these plans.

The trustees will be appointed by the government, so we can presume they will agree to this scheme. But is it fair?

In the southern states, Hindu temples are regarded as an extension of the government treasury and nobody hesitates to dip into their coffers. Muslim donations to Waqf boards, mosques and tombs are never touched, for Muslims are minorities. Christian churches own vast estates and overflowing coffers, but they, too, are untouchable since they are minorities. Hindu temples are a free-for-all, with states like Andhra Pradesh misusing temple funds for other religions, while Kerala has appointed atheist communists to temple boards and taken over the Mattannur Mahadeva Temple in Kannur. In a swift and sudden action, board officials arrived at the temple under police protection and took control, in spite of stiff opposition from the local people. When asked why only temples were being taken over and not mosques or churches, the district Communist Party of India (Marxist) committee member said the former were public properties while the latter were private. Who decided what is private and what is public? And what business has an atheist Marxist government to take over a temple? The answer is money, of course, for Hindus donate largesse in money and jewellery to temples. Unfortunately, the meek and mild Hindus do not object to this travesty of their faith. And the so-called liberals wonder why Hindus talk of minority appeasement.

In 2000, the Supreme Court upheld the right of the Travancore royal family to administer the historic Sree Padmanabhaswamy Temple in Thiruvananthapuram, setting aside a Kerala High Court order directing the state government to establish a trust to take over the management and assets of the temple. In Tamil Nadu, governments have ruthlessly removed the trustees of several temples in order to take over their management. The Dikshitars of Chidambaram went to the Supreme Court and won their case against the government. The problem is that governments want to control temple assets, which have been protected—sometimes over a thousand years—by private trustees, many of whose ancestors established the temples.


Donations of jewellery to a temple are an expression of the devotees’ faith. In our family, whenever any jewellery was made, my great grandmother would make a second identical copy for Goddess Kamakshi of Kanchipuram. The Goddess is decked in our family jewels every Friday when she goes around the temple in her golden chariot. The large Blue Jager diamond earrings famously worn by my ancestor were also gifted to Kamakshi, who wears it every Friday on the golden kavach over her ears. Our family has also established several free schools in south India. We have never mixed religion and charity.

As it is, there are so many thefts of temple statues and jewels. I wonder how many jewels are originals and how many are copies. No audit of temple holdings has ever been done. But the devotees’ offerings cannot be used for non-religious purposes. People gift jewellery to a temple with faith and devotion and even as a votive offering. These cannot be appropriated by governments.

According to Rules 11 to 13 of the Religious Institutions Custody of Jewels, Valuables and Documents and Disposal Rules framed under the HR&CE Act, the decision to hold or dispose of temple jewelleries rests with the trustees. Unfortunately, for the last 75 years, there has either been no trustee or the trustees have been government appointees and, consequently, rubber stamps.

Devotees give a gift with the belief that the temple will maintain their gift. Earlier, the cows donated to Kapaleeswarar Temple in Chennai were being auctioned and purchased by butchers for slaughter. A private individual went to court against the temple’s practice. Based on a court order, this pernicious practice, which went against Hindu dharma, was stopped in the temples of Tamil Nadu.

In the southern states, Hindu temples are regarded as an extension of the government treasury and nobody hesitates to dip into their coffers. Muslim donations to Waqf boards, mosques and tombs are never touched, for Muslims are minorities

There are two kinds of gifts to the temples. One is the cash and non-specific gold chain or earrings or bangles, etcetera, that are put in the hundi. These can be utilised for the maintenance of the temple. The other is the specific gift given on special occasions or with a purpose. These cannot be melted and treated as mere bars of gold.

Since 1977, the Tamil Nadu government has melted about 5 lakh kg of gold and deposited it in banks, earning an interest of nearly ₹ 12 crore. This time, the HR&CE department has planned to melt 2,137 kg of gold ornaments received as offerings from devotees and deposit them in banks. The government has appointed a committee consisting of one retired judge of the Supreme Court, Justice D Raju, and two retired judges of the Madras High Court, Justice Ravichandrabaabu and Justice R Mala, to monitor the process. However, as per the HR&CE Act, only the trustees can take the decision about which ornaments can be melted, but most temples do not have trustees.

There has been no transparency about the jewellery melted earlier or to be melted. I shudder to think of how much will be looted in the name of government deposits. Thank God for court orders stopping this potential plunder!

This issue will not die down easily. The opposition has taken it up and the powerful non-Brahmin ‘upper’ castes, who are the primary donors to temples, are up in arms. The government has now advertised for trustees: I hope the appointments are transparent and genuine, not a sinecure for the party faithful. What is given to the deity must remain with the deity, and not used for non-religious purposes.