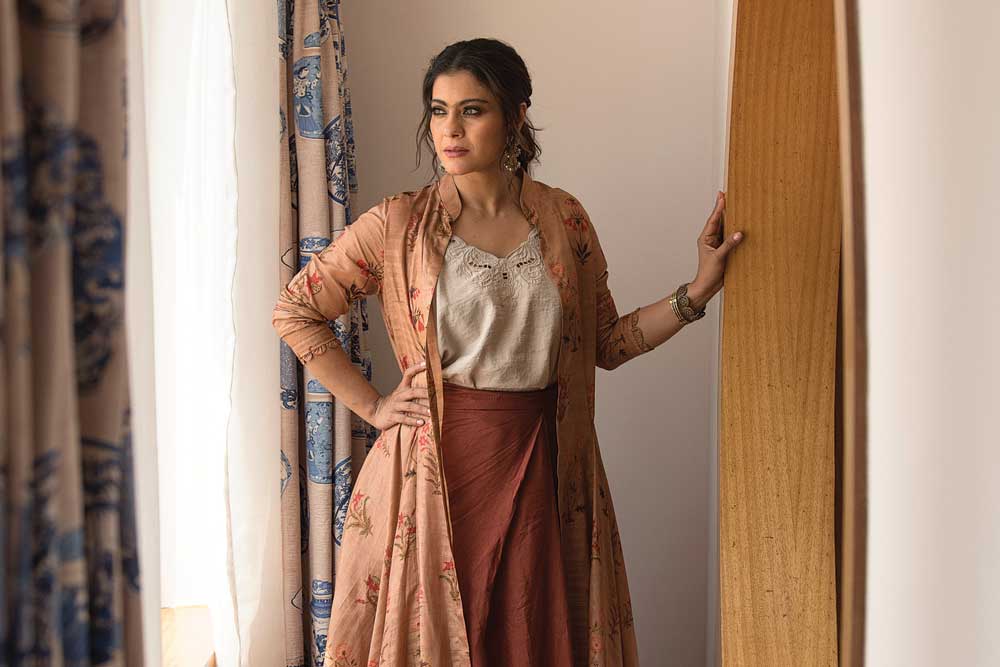 IT’S NOT DIFFICULT to recollect our first memorable moment of Kajol on screen. She was the makeup-less girl with dreamy eyes and a unibrow looking right into the camera as the wind rustled her wild long hair. Reciting a poem about the boy of her dreams, she was like many 20-year-old girls at the time, who asked their mothers to keep their secrets safe. The year was 1995 and the film was Dilwale Dulhania Le Jayenge. Some may argue that Kajol had nine films behind her before this one, but it was this seamless tale of love that made us fall for her. She was much lauded for her effortless presence and performance on screen. She’s a ‘natural’ they all said, a term used sparingly for a time in Hindi cinema when everything in the movies was loud, including the curtains.

In the late 90s, Hindi films oscillated between overdramatic family dramas, sacrifice-ridden love stories and jingoistic tales about war heroes. Realistic films like Ram Gopal Varma’s Satya (1998) were just beginning to break the mould. Leading ladies surely had much more to do than they did in the 80s. But Kajol’s contemporaries were the kind who were not just good actors, but archetype leading ladies. Madhuri Dixit helmed the list followed by the likes of Aishwarya Rai, Manisha Koirala and Karisma Kapoor. Kajol was the exact opposite of a classic Hindi film heroine then, and she stuck to it. “I was loud. Like really loud. I still am, but I don’t know any other way to be,” she says with a giggle. Twenty-six- years and 39 films later, we now see Kajol settled and content with her long but choosy career in Hindi cinema.

Today, at 44, she is perfectly groomed, stands tall on six-inch heels, the uni- brow is intact, and that’s how she prefers it. She quickly finishes the last photo shoot for the day, puts away her heels under the sofa and sits comfortably with her legs crossed for this conversation. Recently Kajol celebrated 20 years of her hit film Kuch Kuch Hota Hai. Her latest, Helicopter Eela, where she plays a protective mother to a teenage son, has been released. “I don’t think I realised exactly how much people will take away from the films I did or even the fact that they would remember it 20 years down the line. We were doing the job in the moment without really thinking about how people were affected by it or anything like that. We’d be too scared to make a film if we thought that way. We were more worried about whether it would be cinematically appealing or not at that point. I was never one to over-indulge in the film or character I was playing, because I think that would paralyse my ability to be instinctive,” she says.

Her ability to be instinctive and spontaneous on screen brought a unique energy to her films. Karan Johar once said, “I would call ‘action’ on a shoot and expect a little atom bomb explosion on set every time Kajol was around because that is who she was. She kept us all on our toes.” And so it was for the girls who grew up watching her.

Finally, here was a heroine who was not surreal or straight out of a fairy tale. She wasn’t giving us beauty goals or making us wish we were perfect. Kajol was like a friend you could both fight with and share with. Someone like DDLJ’s Simran was daddy’s girl for sure, but she had a wild side and she went for her dreams without worrying if her hair was out of place. That’s what made Kajol an instant success. She was uninhibited, wasn’t image conscious, and was easy to connect with. “Easy to connect with? Hmmm… I don’t know if it was so much acting related or just the kind of inability to fake it to that extent,” she says. “As I have grown up, I’ve realised the more real you are, the more people around you are real as well. If I confess my vulnerability to you, in front of you, you will be comfortable doing the same. It’s easier to live like that both as an actor and in life, rather than constantly be on guard and watch your words and hold your breath. I would never be able to do that.”

“As I have grown up I’ve realised the more real you are, the more people around you are real as well”

She was dramatic, no doubt, but real, no matter how intense the drama she had to essay. Kajol stood out in cult films such as Baazigar (1993), DDLJ (1995) and Kuch Kuch Hota Hai (1998). Her tomboy act in Kuch Kuch Hota Hai was a bold move at a time when heroines were expected to look a certain way. She somehow embraced even the silliest, most unrealistic plot points, and portrayed them convincingly. She was among the first female anti-heroes then, becoming more popular than the hero himself in a film like Gupt (1997). “I always knew exactly what I was doing, where I was. Even with films like Gupt and Dushman (1998) that were more female-oriented in that sense, I never felt like I had to take a giant leap and change myself. I never had a moment of realisation about why I loved to act. It was more organic than that and it was my job. I did it well. They paid me for it. I wouldn’t have been there if I didn’t want to,” she says.

Coming from a family of actors, the craft must have come that much easier to her. Kajol’s mother Tanuja, her aunt Nutan, and her grandmother Shobhana Samarth were not just fine actors, but also strong-headed, independent, working women. “I definitely had a very liberal childhood. Amazing role models who lived their life in front of me. Nobody ever discovered or discussed empowerment because they were just doing it. They were practising it. They were making it happen. You can’t miss what you [haven’t had], and when you have something, you take it for granted, so I did. But today, when my daughter was about three- months old, I called up my mom and I said to her ‘I love you, and I don’t think I ever realised how much hard work goes into bringing a child into this world, taking care of it and the responsibility of it.’ And she did all of it while working.”

She looked up to the women in her family, but didn’t follow their footsteps. From the very beginning, Kajol knew that her journey would be hers alone. She did her first film, Bekhudi (1992), when she was 17, a time when she was struggling with her self-image. “I didn’t have a very bad self-image but at the same time I knew I was not ‘beautiful’. I was cool, I was intelligent, attractive. There were a hundred other adjectives I could place for myself. I could carry a conversation. I could make people laugh, and, you know, make friends. I had a personality, but as far as cheekbones went, I was not in the running at that point of time.”

SHE SPENT MOST of her childhood at an all-girls boarding school, but she really started to feel out of place once she left it. “When I came back, I realised I lived in my jeans and I loved them. My jeans and t-shirt was who I was. I wouldn’t think about what I wore in the morning. Truly it did not make a difference to me. But somewhere down the line, subconsciously, when I joined the film industry, it mattered and I realised that I mattered to the people around me. I wouldn’t say my family, but the people you meet. Society. It’s taken me a long time to look at myself in the mirror and say, ‘Yes you’re gorgeous.’ It was after my daughter Nysa was born. I was my biggest critic, and that needed to change. My perspective towards myself changed. Now I am kinder to myself and hence I look the way I do,” she says.

In the two decades that she has worked in films, Kajol unapologetically terms herself as an actor who isn’t starving to perform. She has done six films in the last ten years, she’s now happy to take up roles that suit her age and sensibilities. With time she has also accepted how she needs to change her approach to acting. “When I was doing this film called We are Family (2010) I realised how the script and the space of Hindi films is changing. Whatever I had done as an actor till then, I had to unlearn because it was not working on camera anymore. Maybe because times have changed, films have changed and people have seen better. So, now you can’t get away with what you thought was okay or mediocre at one point in time. In this day and age, your standards have to go up. There’s so much international cinema or what we term art cinema; it wasn’t so widespread then. Even in commercial cinema, you can’t get away by saying, ‘We are taking a cinematic liberty.’ People will find out, criticise it and hold you to blame for it,” she says.

Kajol’s priorities have changed. She feels freer as an actor because she can say ‘no’ to people without hesitation. Her male contemporaries like Shah Rukh Khan and Salman Khan may still be playing romantic leads, but she’s past that. The success and failure of her work affects her less. “In my career I never sat down and thought, ‘Is this the right thing for me to do?’ It just happened. I got married, then I took one year off, and I did another film, and then I took two years off when I had my baby, and then another three years off with my second baby. And I’m fine with that. Work is a part of my life, it’s something that I’m thankfully good at. If I was bad at it, it would have been a different story altogether. It gives me so much satisfaction and it makes me feel good about myself. Yes, it’s a part of myself I hope and pray I never lose sight of, but it’s not the whole of my life.”