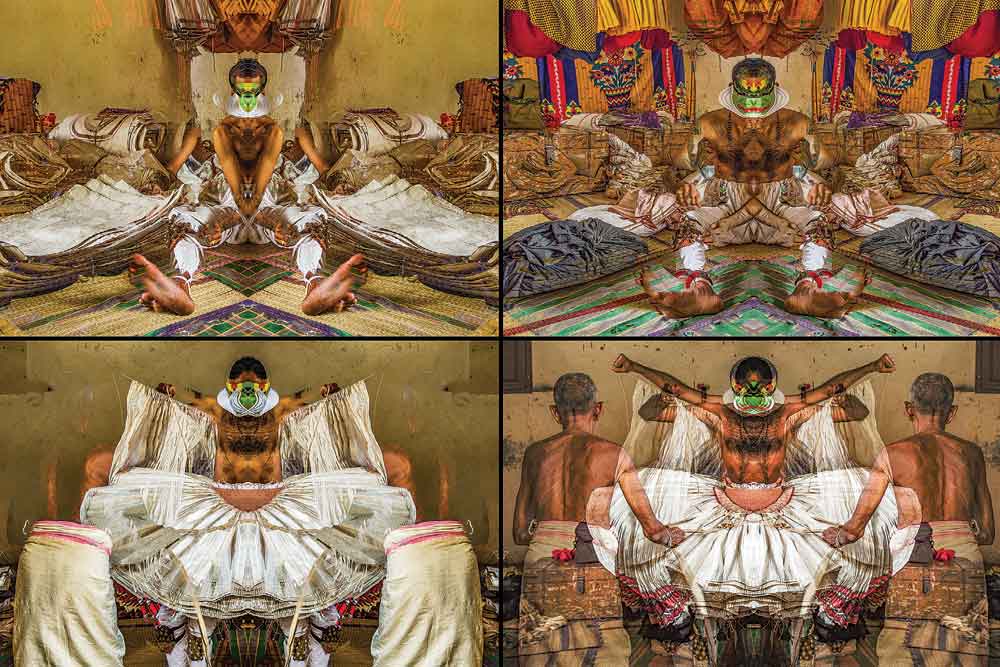 
ALAPPUZHA (STILL REFERRED to as Alleppey by many) is best known as the ‘hub of Kerala’s backwaters’. Domestic and international tourists annually head here to embark upon a houseboat ride from the Vembanad Lake. With the backwaters licking three sides of Alappuzha, its vistas relent into endless blue canals fringed by coconut trees and seemingly idyllic village life. An important centre for Kerala’s coir industry, and its iconic umbrellas, the town has always been an important centre for trade and tourism. It is now the venue of Lokame Tharavadu (The World is One Family), a hugely ambitious art exhibition which displays the work of 267 artists (of which 56 are women) who trace their roots to Kerala (84 are based in the state, the remaining are scattered across the globe).

The Kochi Biennale Foundation, with the Government of Kerala’s support, brings the exhibition to multiple venues in Alappuzha, and one venue in Ernakulam. While it was originally meant to open in early March, state elections and other considerations pushed the opening to April 18th, and it will continue till June 30th, 2021.


Given the stygian clouds of despair choking the country, one can’t help but ask the question, is this the time for art, or is this not? Do we need art more than ever before, or at times of life and death, what place does art occupy? While state lockdowns and personal emergencies will obstruct numerous potential outstation viewers from seeing the festival, for the artists themselves and perhaps even for the state, the exhibition is a source of great pride. Its timing does it no favours—many of the artists themselves are unable to travel to see their works on display—but it is sure to provide a moment of respite, even respair. The show’s title, after all, ‘Lokame Tharavadu’ arises from one of the verses of Malayalam poet Vallathol Narayana Menon, which ‘appeals to the universal spirit of humanity’. At a time when humanity is being severely tested, art cannot provide us answers, but it can perhaps remind us that we are all in this together.

In order to safeguard viewers, the website of the show lists a series of protocols, which includes applying for a pass on the portal of the Government of Kerala with a negative RT-PCR test within 48 hours of arrival, or proof of having taken two doses of the vaccine. Today, these steps are necessary, and it is hoped that such measures will bring in and reassure viewers.

The heart and mind behind this vast exhibition is president of the Kochi Biennale Foundation and artist/curator Bose Krishnamachari. The origin of this Malayali artist project dates back to 2005, when Bose curated a travelling show, The Double-Enders. While Bose had originally thought that the 2021 reimagining of The Double-Enders would include around 140 names, he found that instead of deleting names from his list, he had to keep adding more. Late last year, he travelled across Kerala from Wayanad to Kannur to Trivandrum visiting the studios of artists. Most practitioners he found did not even have a studio, at times their work was kept under a mattress or on shelves. Speaking from Alappuzha, he says, “I wanted people to see how talented these artists are. The diversity that I have seen in these artists’ works, I haven’t seen anywhere else. Here one can find conceptual art, abstract work, surrealism, Arte Povera, augmented reality. This variety of practices and processes—many of these artists really construct their ideas from site—is fantastic.” He adds, “It is like 267 solo shows.”

Unable to see the exhibition in person, I try to make do with the minimal information online. While many galleries across the country have managed to create virtual versions of physical shows (given the pandemic constraints), one can understand the limitations of a festival this vast. Spread over five venues in Alappuzha and the Durbar Hall in Ernakulam, a show like this must be seen on foot and in the flesh and not on screen and online. Imagination and online glimpses can barely do justice to an exhibition as immense and varied as this.

The artists on display include familiar names such as A Ramachandran (known for his large and detailed canvases of lily and lotus ponds), Akkitham Narayanan the acclaimed Paris-based painter from Kerala; Gigi Scaria (who explores urbanisation and migration in his sculptural installations), Jitish Kallat (who engages with questions of time and the cosmos) and Parvathi Nayar (known for her complex black-and-white graphite drawings) to name just a handful.

While the veterans have their own lure, the exciting part of the show is the discovery of relatively less-known artists who can now avail of an exhibition of this scale and who viewers might be seeing for the first time. Bose makes mention of the works of Shanta CM (who he calls Shanta echi or elder sister). He met her at her home in Kozhikode, and says her abstract works would make her a “Star, if she were living in New York or Berlin.” An exhibition like this can provide a fillip to such artists, lifting them from relative anonymity into the limelight.

With over 200 artists the themes and processes on offer are unimaginably assorted. Kavitha Balakrishnan from Thrissur is showing a set of designs on paper, photographs and mixed media graphics all involving written texts and titled Picturing in Mother Tongue. Painter and photographer Hariharan Subrahmanian from Palakkad asks uncomfortable questions with his images, whether it is about the destruction wrought by recent floods in Kerala or how something once beautiful can be transformed into an ugly incarnation of itself. Murali Cheeroth’s videos streamed at the show and paintings deal with the icons of the social reforms, the splendour of the environment, and the violence of our society.

Ernakulam-based Radha Gomaty’s digital drawings Alexa!!!…Win this War! created on an app on a phone are particularly arresting. The black-and-white sketches of human shapes in throes of agony and ecstasy seem to tell of the evil within and without. Revealing how she creates her images on her phone, Gomaty says, “For an artist without a studio like me, the phone turns every space into one. The best part of this is I can do it anywhere, whether I’m stuck in a traffic jam or at home.” While a “big finger on a small screen” might have its own restrictions, Gomaty found that this medium was making her work more “sophisticated”. Finding the lockdown experience “harrowing to the core”, she gathered some comfort in making and sharing these sketches.

If Gomaty’s sketches have a stark black-and-white aesthetic to them, Alappuzha-based VS Blodsow’s work is a 33-shade rainbow laid out on an 11.5 feet long canvas. Titled Spectrum: Dear Mr Ellsworth Kelley & Others, the strips of material were sourced from a textile shop from his hometown. Once when he was based at the Cholamandal Artists’ Village (near Chennai) he came home during Onam, and visited a textile shop with his girlfriend and mother, there he was arrested by the “sudden fragments of the blouse pieces”. He wished then to “take the entire spectrum to a show”. While on first glance this might seem a “happy” piece, Blodsow adds, “Everything is hidden inside the spectrum.” Spectrum… faces a sculptural installation of 19 masked torsos propped on 19 Ashoka Pillars, made out of fibre. While the masks will immediately hint at Covid-19, Blodsow explains that this is a comment on Article 19 (regarding freedom of speech), “I am talking about the missing voice,” he says.

From sketches made on a phone, to a play with fonts, to sculptural installations, to video and photography—this exhibition offers a mind boggling array. Berlin-based Sajan Mani’s Caste-pital is a durational performance of 9.30 hours. Mani adopts the songs of poet and Dalit activist Poykayil Appachan, to use “drawings as writing and writings as drawings”. Identifying as a ‘Dalit Black body,’ Mani is inspired by the poems of Appachan who in one verse talks about how “our grandparents were used as cows to make these fields”. Speaking from Stuttgart where he is currently on a fellowship, Mani says, “I am reflecting on the questions of casteist, capitalist construction of the tharavad (ancestral home), while also asking questions on what is home; is it a physical thing, or a social thing or a mental thing?”

Speaking to these artists, one can’t but help wonder why and how Kerala has birthed so many artists? Aware of Kerala’s faults, from its patriarchy to casteism, Mani believes that the state despite its failings, is truly an “amalgamation” and a “multiplicity”. This perhaps lends to an artistic sensibility and appreciation. Bose believes that the “reading habit and education—from OV Vijayan to Kakfa—” has made the people of the state more receptive and adaptive to different ideas and influences. He says, “I look at Keralite artists and Latin American artists and see some similarities; maybe because of the influence of nature and grandparent’s tales. Human heritage has something to do with it.”

Over the next two months, one hopes that more people will be able to experience the physical show. Artist, bi-lingual author and art educator, Kavitha Balakrishnan who has been painting since the age of 10, and who is yet to experience the exhibition says, “I feel so happy this show is happening at such a distressing time. I’ve not seen the show myself. After my second vaccine, I will jump into Alleppey.”

(Lokame Tharavadu (The World is One Family) runs in Alappuzha and Ernakulam, Kerala, till June 30th, 2021)