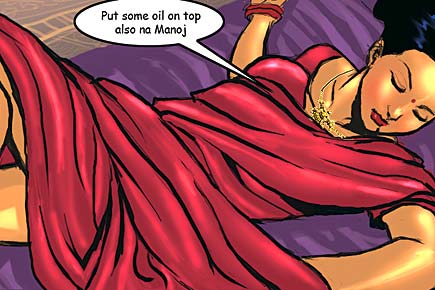 Savita Bhabhi has always existed in the mind of every man. Now she lives as a desperate lead in savitabhabhi.com, an ongoing comic series.


Savita, a young beautiful housewife, the pal­lu of whose sari is in perpetual disarray over her stunned blouse, and whose mangalsu­tra glows in the light of male imagination, is hav­ing a boring Saturday as her husband is at work. A cricket ball crashes through the window. Two apologetic adolescent boys arrive to fetch it. Savita Bhabhi, as she is reverentially called, rep­rimands them. Then she bends onto the floor in search of the ball. Slowly, she is denuded by the boys. She is frightened, of course, but paralysed by fear and passion. They make furious love on her conjugal bed. Another day, when her husband is off at work, a bra salesman visits. She takes him in with the innocent intent of giving him water. He is thirsty. She has needs. They get naked.

Savita Bhabhi has always existed in the mind of every man. Now she lives as a desperate lead in savitabhabhi.com, an ongoing comic series that has become a new rage. Within six months of the website’s launch, it has been ranked the 42nd most-visited site in India with 200,000 visitors a day and 78 million page views a month, according to a web information company.

The man behind Savita Bhabhi is one Deshmukh, whose identity is not known. He is young, single and based in Europe, he says. In his first-ever interview, Deshmukh speaks to Open. If you really want to put a face to the name, he says, imagine Manoj, the servant boy from the comic strip, one of the many whom Savita has favoured on lonely, humid days.

How did you hit upon the idea of starting this website, www.savitabhabhi.com?

Probably the biggest male fantasy you are catering to with your online venture is female orgasm. Savita’s sexual appetite is never satisfied though she has more orgasms than a regular woman. Would you consider Indian women to be a frustrated lot?

A lot of Indian males are not able to satisfy their women completely, the main reason being they just don’t know how. I hope sites like savitabhabhi.com bring out the understanding that women need satisfaction too.

You make the mangalsutra look as sexy as lingerie. What else do you find sensuous?

It’s not just her body but her independence and her will to live life according to her rules that make her attractive. Physically, her long-flowing hair and cute face are a major turn on.

Has Savita ever slept with her husband?

Yes, she has. We will be soon coming out with an episode that reveals exactly why Savita and her husband have drifted apart.

Which Bollywood actresses are Savita Bhabhi’s saris inspired by?

None actually. But I am sure some Bollywood actresses will soon be inspired by Savita Bhabhi. Don’t be surprised if you see a movie coming out soon.

According to our stats, and a poll we had taken on another website, we have 30 per cent female members. Savita Bhabhi is a symbol of the changing times—where both our attitudes towards sexuality and the role of women in society are opening up. I think it is basically this that has made Savita Bhabhi popular with not only Indian men but Indian women as well.

Some viewers find rape and pain kinky and have posted requests on your site. Where do you draw the line?

We strive to only depict situations that are 100 per cent legal. As savitabhabhi.com is a site that has a very wide appeal, we will stay away from sensitive issues.

Do you make any money of the site?

As of now, we are not making any profit from Savita’s escapades. We do sometimes place ads on the site, but only to recoup costs such as those associated with hosting the site.

There is a lot of fan mail asking for savitabhabhi.com to include other Indian women. Any other series in the pipeline?

Not currently, but once savitabhabhi.com has reached a certain level of popularity we will look towards expanding into other series. The main problem with expanding is finding reliable artists who are capable and willing to draw a series like this. If any fan is interested, please contact us.

From the second episode onwards, we tried to ‘improve’ the artwork and unfortunately lost what was our major selling point—the simplicity of Savita. After a good talking down from the fans, our latest episode now has gone back to that simple and natural look of Savita.

There is a lot of speculation over your identity. There is also a rumour that some IITians are behind this venture.

It is very interesting to hear speculation that savitabhabhi.com is an IIT product. But, no. It is the creation of a couple of second-generation Indians. Though we guys do not live in India, we still like to think we are Indians at heart and thus came up with this.

If someone was to put a gun to your head and ask which character from savitabhabhi.com is the most like you, what would you say?

Ha ha! Manoj, the servant boy. I love how all the women of his neighbourhood lust after him and the tremendous confidence he has, even though he is from a lower stratum of society compared to Savita and the other characters… though you have given me a good idea with this question. Don’t be surprised to see Deshmukh himself make an appearance in an upcoming episode!

How long does it take you to complete one episode?

It takes us about a month. The process starts with thinking up a story line and then converting it into a good script. This is then forwarded to the artist. Once the artist is through with his work, we send it to translators.

Does your family or partner know? How many people are involved?

Currently, my family is not aware that I am the creator of Savita Bhabhi. I feel it’s better to keep a low profile. There are many people in the core team. Apart from them, we have dozens of volunteers who help with things like translating and preparing the scripts.

Savitabhabhi.com is a lot tamer than the thousands of porn sites around. Thus, I am confident that except for a few people who are actually enjoying a lot of popularity by dissing Savita Bhabhi, no one in any real position of power is really interested in taking us down. Though we sincerely feel that such a situation is highly improbable, we do have a solution just in case. Fans can register at www.iwantsavita.com and receive savitabhabhi.com updates daily or weekly, according to their preference. So even if our site is ever banned, fans can still receive their daily dose of Savita Bhabhi straight in their inbox.

What do you think offends the morality of a few the most?