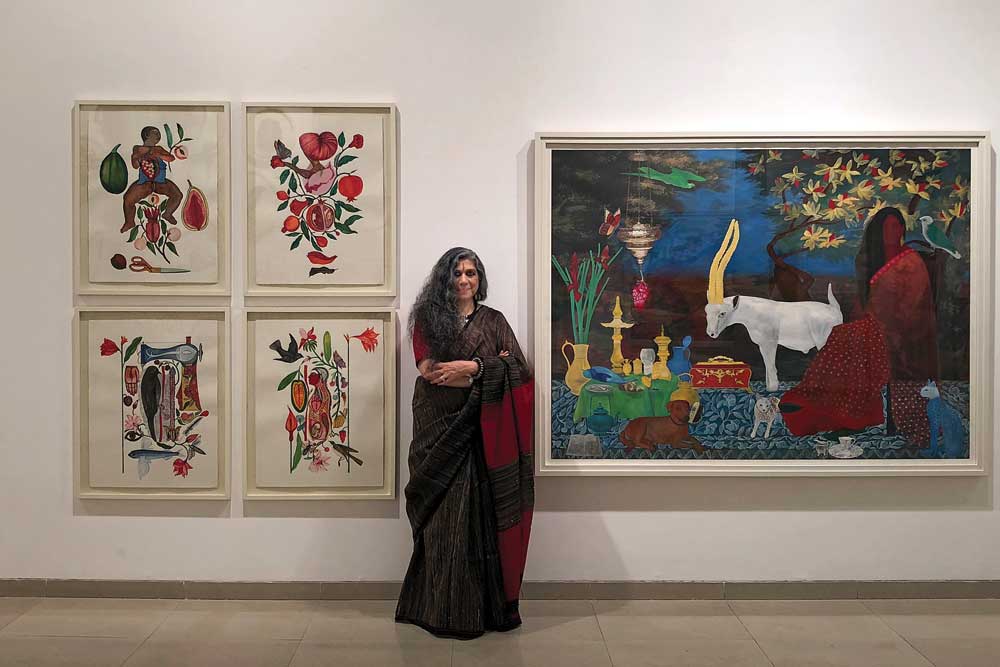 “MY WORK IS informed by the personal politics that governs my life,” declares Rekha Rodwittiya. As Rekha@ Sixty: Transient Worlds of Belonging makes clear, Rodwittiya is a Madonna of personal histories. This strikingly intimate and small-scale solo exhibition at Mumbai’s Sakshi Gallery opened recently to celebrate the Vadodara-based artist’s body of art. Her work, where the mundane and the profound co-mingle, is an unsung celebration of “the everyday life of the woman, to be perceived, witnessed and acknowledged”, as she insists. With a keen-eyed curiosity, Rodwittiya has always found her sources of inspiration in the world around her. She likes to blend parables, metaphors, allegories, myths and legends to give her paintings an added layer of meaning that resides beyond its immediate visual dazzle. All the works on display as part of Transient Worlds of Belonging are mainly watercolour, besides an array of metal cut-outs.

Describing Rodwittiya’s return to the medium of watercolour on our walkthrough, Geetha Mehra, director, Sakshi Gallery, says, “It was something she wanted to do, like a kind of a touchstone.” As you enter the gallery, you run straight into the sexagenarian artist. I don’t mean Rekha Rodwittiya in person. But her double self- portraits that greet the viewer with their surprising and overriding intensity. These spectacular self-portraits would have us believe in Rodwittiya’s powers as a magical realist. Rife with symbolism, they are filled with autobiographical elements borrowed from her life. Both paintings—rendered with meticulous care, confirming Rodwittiya’s fine draughtsmanship—offer a glimpse into her inner life. One depicts the artist as a younger woman, in her twenties, in a blue top and yellow skirt. A tea cup in hand, she half reclines, reminiscent of the Renaissance Venus minus the nudity. She’s surrounded by objects that aren’t “any random stuff”, as Mehra argues. A sword, a TV remote, a palette with dabs of paint and brushes and a plate of half-eaten fruits are scattered across the frame against a strictly floral composition. A macaw is perched on the couch, looking at Rodwittiya while the artist herself confronts the viewer. “She is compulsively observant and is always recording things photographically. She likes to collect trinkets and objects. Sometimes she finds these little things on the road. Later, she draws from this menagerie to feed her art. So, these objects you see are not trivial. They always have some significance to her,” says Mehra, who has represented Rodwittiya since the late 1980s.

Rodwittiya returns in another self- portrait, this time as a 60-year-old striking a dignified pose. It’s easier to recognise her here. She is her typical self, in a sari, and her hair drapes her shoulder like waterfall. A cat, dog, goat, butterfly, a bird and all her companions, animate or inanimate, fill the frame. The canvas is dramatically darker but no less vigorous and vivid. The miniature model allows Rodwittiya to cut freely between memory, fantasy and reality to create a harmonious pictorial world that can be seen as a signpost to the events of her life. It’s like witnessing a rare union of domestic and creative bliss. The rich detailing and attention to foreground suggests a keen eye for small and peripheral things that we tend to take for granted. The two self-portraits face each other, resulting in a curious impression of a younger Rekha Rodwittiya staring at her older version, the past and present in a wistful embrace.

Putting herself out there as a subject is not something Rodwittiya does often, even though so much of her art and its motifs mirror her own life. For example, if you find a metal impression of a plane somewhere in the exhibit, it’s an allusion to Rodwittiya’s father who was a fighter pilot in the Air Force, or a motor bike, a gift from the artist to her son at adolescence. ‘It is through the lives of the ordinary that we best witness the ideals of any ideology,’ Rodwittiya says over email, explaining her credo.

Transient Worlds of Belonging reasserts Rodwittiya’s claim as one of India’s leading female artists. She’s proud to say that feminism has informed her work from the beginning, at a time when neither that term was as popular nor as divisive as it is today. ‘From the many stories about the courage of ordinary women, both rural and urban, that have championed women’s rights in the Subcontinent, I have found my strength. It is the culmination of these myriad experiences lived through six decades that makes up Transient Worlds of Belonging. It reflects the world that I live in and which becomes my personal territory that I call my world of belonging.’

It is through the lives of the ordinary that we best witness the ideals of any ideology, says Rekha Rodwittiya

BORN IN BENGALURU in 1958, Rekha Rodwittiya was largely brought up in Baroda where her family moved in 1967. She describes her upbringing as ‘liberal’ and goes further to say that her art career wouldn’t have been possible without the freedom her parents gave her.

All of five, she knew she would be a painter. How can a child that young be so extraordinarily sure of her calling? ‘I felt some strange connection with art from a very young age. There was always this deep-rooted knowledge of a desire for art,’ Rodwittiya recalls. At home, she was privy to dinner-table conversations that typically revolved around history, current affairs, politics, human rights, literature and cinema. ‘Conversations of such nature were a daily ritual for us,’ Rodwittiya says. To be invited to participate and have her opinion sought in these discussions shaped her perception of the world and helped evolve her vision of personal freedom and liberty.

In 1976, she joined the fine arts faculty of MS University of Baroda, moving ever closer to realising her childhood dream of becoming a painter.

The art scene in Baroda in the 1970s was enjoying its own belle-époque moment, much like Bombay of the 1950s. The city was in the throes of a hipster revolution, a heady time when many of the Baroda artists we think of as revolutionary today—Bhupen Khakhar, Jyoti Bhatt, Gulam Mohammed Sheikh and Nilima Sheikh—were redefining modern Indian art. Stalwarts like NS Bendre, KG Subramanyan and Himmat Shah also had a strong connection to Baroda, renowned as one of India’s most important art citadels. A rising star, Rodwittiya thrived and flourished in this mix. The strong tradition to which she belonged also helped her develop her own wings. The Baroda School propagated a strong narrative style, figuration and miniature-style visual lyricism. It was in this creative ferment that Rodwittiya found herself coming of age. Baroda offered her a unique combination of traditional methods with the challenges of an evolving modernity that set the stage for a young artist like her. ‘Of course, how can you not be influenced by all the art happening around,’ she says, adding, ‘But even as I was getting exposed to the Baroda School, I chose the territory of personal histories and so, employed a simple naturalism in my early works to talk about a private world that my outer countenance camouflaged.’

In college, she was known to be bold and articulate, her political ideas shaped by a socialist consciousness that was prevalent in Baroda among many of her generation. “She was a firebrand out to change the world,” as Mehra puts it.

After completing her BA in painting from Baroda in 1981, she joined the MA programme for a year and worked in the private studio of Jyoti Bhatt, a photographer, printmaker and artist with whom she did a series of short films in 2015 (available on YouTube).

Away from the classroom, Rodwittiya painted a series of small and imaginary portraits in watercolour, a marked departure from the narrative pictorial language she was practising until then. She calls this creative period outside the classroom a ‘watershed in my career’. Talking about Jyoti Bhatt’s influence, she says, ‘He is perhaps one of the most progressive thinkers I personally know and someone who always upheld my feminism at all times.’

Acknowledging Nasreen Mohamedi and Peter De Francia as among her other mentors, she says, ‘These people held me to exacting standards.’ Traces of their influence manifests itself even today in the punishing work schedule that Rodwittiya maintains. She’s notorious for being equally harsh on her art and is known to brutally destroy pieces she isn’t pleased with.

Smiling, Geetha Mehra relates that it’s not unusual for her to make a “bonfire” of art she doesn’t like. “When you are working that long with an artist, you know that not everything that comes out is a masterpiece. But with Rekha, if there’s something she’s not comfortable with, it never leaves her studio,” reveals Mehra.

(Rekha@Sixty: Transient Worlds of Belonging will be on view at Mumbai’s Sakshi Gallery until December 15)