×
Art: Inside the Studio 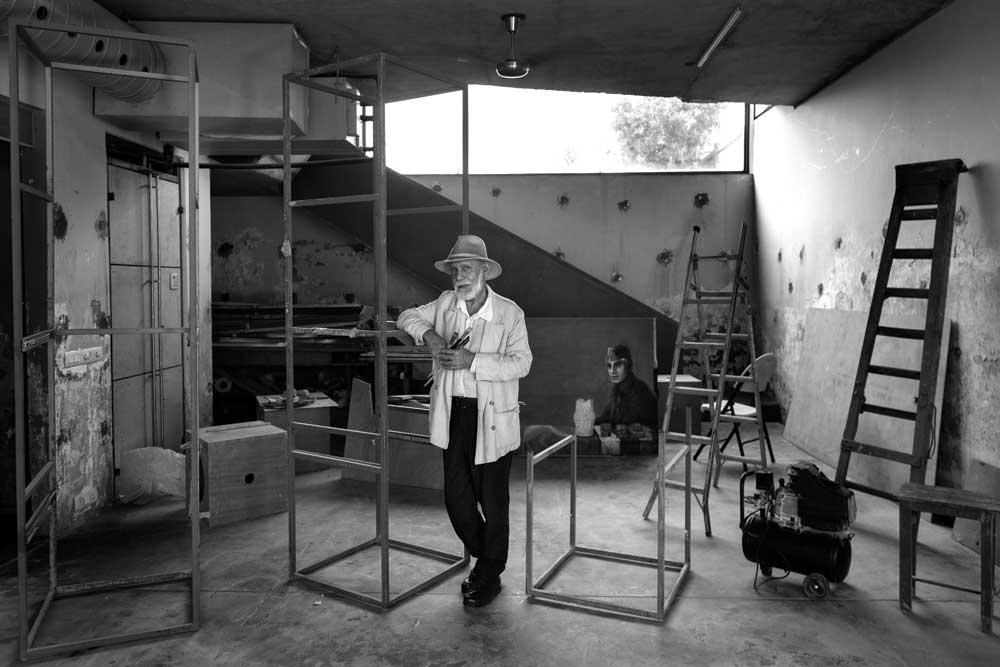 THE WORD ‘BEAUTIFUL’ recurs frequently in artist Ranbir Kaleka’s vocabulary. He enunciates the adjective in the spirit of a declaration, usually with the stress on the first syllable, in an accent that reveals a harmonious synthesis of his Punjabi tongue with an inherited British twang, perhaps acquired during his time spent studying painting at the Royal College of Art, London in the mid-80s. We are sitting at the round dining table at his sun-lit home in New Delhi, when I realise his fondness for the word, which he uses to deliver an aesthetic judgement, always in a considered, meaningful way. He never applies it casually or callously. Like when he recounts to me the vivid nature of his memories from the age of one to five, he transports me back to the car he was in, accompanying his parents to his mother’s village near Hissai in Punjab where they would go once in two years. He remembers his father’s hands on the steering wheels, his rolled-up white shirt, and the beads of sweat on his palms. His father often would forget the exact coordinates to arrive at the village. He’d therefore interpret the smoke rising from distant fields as navigational signs. Suddenly, “like a magician had taken off a handkerchief, you saw a tiny little village with no streets,” Kaleka says, making no effort to disguise the wondrous sparkle in his eyes.

It is a memory he hasn’t spoken of on the record before. His father’s house, yes. In fact, the introduction to a recently published monograph Ranbir Kaleka: Moving Image Works, (2018, Kerber Verlag, Berlin) on his decades- long career written by its editor, Hemant Sareen, begins with a paragraph-long quotation in which Kaleka offers a glimpse of the ‘detailed, rich and dense memory’ of his first five years during which he lived a relatively sheltered life and was protected to a degree where he wasn’t taught about the world or of anything external to their haveli. “Events were experienced fully, even though they weren’t always articulated, I still remember them as being laden with significance,” he tells Sareen. “Once, a large mirror was brought into the house and I remember seeing myself in it head-to-toe for the first time. Someone had placed it against a door on the floor, probably for tying the turban… The house had a large terrace outside and once while playing my brother kicked a ball and it hit the door, and we heard this crashing sound on the other side. I went in and saw myself in the shards of the broken mirror: my ‘self’ was broken into little bits but I was complete.” The experience neither disturbed nor fascinated the three-year-old Kaleka. “It was as if something meaningful had happened,” he says.

These two shards of memories: the detail about his father’s rolled up sleeves and the acknowledgment of the beads of sweat on his palms as he manoeuvred the steering wheel, and the recounting of seeing his ‘self’ shattered in a mirror while remaining unperturbed by the seeming significance of the observation, offer insightful testimony into the elusive nature of Kaleka’s artistic practice, particularly his engagement with the moving image which saw its first iteration in the 1998 work, Man Threading a Needle for which he projected onto a painted canvas of a man threading a needle, footage of the very same man threading the needle, animating the painting while transforming the mundane act into something with mystical connotation.

Kaleka’s work, particularly in its melding of two forms—painting and video—is rarely interested in broaching resolutions or even articulating their core. They derive their meaning from what Sareen calls the third thing: ‘a new paradigm that probes the nature of verisimilitude by laying bare the dynamics between memory and perception, and memory and duration.’ Sareen qualifies Kaleka’s interest in duration as a ‘corollary of his preoccupation with his visual, aural, sensuous, and osmic memories that are made up of partial, vivid, keen, child-like perceptions as well as dreams, reveries, visions from his early childhood.’ His artistic agency has evolved from his honing of intuition as a methodology. Sareen articulates it perfectly, citing Gilles Deleuze and proffering that Kaleka’s intuition was about freeing these memory images by finding a form that could recreate not an image or an experience so much as ‘the conditions of experience’.

At its core, Kaleka’s practice embodies a certain attentive consciousness that you can glean but not quite articulate, because he leaves so much to the imagination

TO ENCOUNTER A moving-image work by Kaleka and to expect from it a transcription that renders exactitude in terms of meaning is to miss or sidestep the point of his artistic practice. Kaleka avowedly works on a project till he reaches a point where he is no longer able to describe the work in any completely comprehensible, meaningful way. He pushes a work to a point where it engages him more yet at the same time remains out of his grasp. He isn’t interested in reaching the center. “A complete understanding of a work is a point where the work is dead,” he told Sareen. When I ask him to elaborate he retreats once again into a memory; at first an aural one, the rustle of his mother’s salwar, then the tactile recounting of its feel. His mother used to sew clothes and told him once that while embroidering a phulkari shawl, for instance, it was a tradition for the embroiderer to always insert a “false stitch”, thus introducing into something otherwise potentially whole and complete, a secret glitch. “I understand the incompleteness of understanding,” he tells me. Alongside, he remembers how when he was little, he was almost compulsively bothered by imperfection; frayed edges, a stitch come undone. At some point he embraced the blemish. He points to the sleeve of the thin white cotton shirt he is wearing with an embroidered motif running along the bust of wrestling bodies. One thread hangs out but its unseemliness is no longer irksome.

Despite his unwillingness to testify to any fixed notion of what constitutes the core of his art-making impulse or the principles that govern the directions in which his work might evolve, he is not reluctant to offer clues. Attention seems to be elemental, even though Kaleka doesn’t endorse the view that the quality of his attention is somehow more focussed than most. But his highly attuned form of seeing and experiencing the external world through a rigorously self-aware internal consciousness that is able to arrest and isolate beauty by locating it within the domain of empathy explains his fascination with constantly creating and elaborating upon a wildly gestural vocabulary. Sareen, too, picks up on Kaleka’s flair for focussing upon and sometimes even repeating gestures ad infinitum, ‘achieving little purpose other than that of creating an ambiguity,’ serving thus as means without end.

Sareen reveals that gestures function as a cinematic, semantic unit across Kaleka’s oeuvre, from Man Threading a Needle to Sweet Unease (2011), which plays with the acts of eating and wrestling as inter-twined forms of nourishment and survival, to his more recent Fearsome Acquiescence of a Monotonous Life (2019), a two-channel work embedded within a sculptural installation in which one sees through two different vantage points, the same person in an encounter with his self and the simultaneous nature of his existence along a continuum of space, time, and emotion.

In his more elaborate, House of Opaque Water, a 10:33 min loop, three- channel video projection that first showed at the Kochi-Muziris Biennale in 2012, and was more recently on display at Vadehra Art Gallery as part of Kaleka’s solo Fear of a New Dawn, he focuses on his subject, Sheikh Lalmohan’s gestures, using them as modes of memory and recall, thus heightening the atmosphere of loss that must pervade his consciousness as a fisherman who lost his homeland, a small island in the Sunderban delta, when it was washed over by the mighty Ganga, thanks to climate change.

Intriguingly, it is through the repetitions, the deliberate re-focussing, re-visiting through spectral shadowing and/ or elusive glitches that draw attention to a certain action within the moving- image works, particularly those that are projected upon painted surfaces, that Kaleka reveals his artistic hand. Meticulous layers are superimposed onto painted surface through projections to evolve an unstable set of significations; traces. It is how Kaleka reclaims technology by adding to it a signature touch, making it ‘hand-made’ in a sense. Kaleka achieves this by relying on his artistic and aesthetic intuition. He describes it almost flippantly as a certain impulse or a decision ‘feeling right’. It is possibly the constant and continuous search for the feeling of ‘rightness’, premised on intuition that accounts for the slow nature of Kaleka’s practice, both in terms of production of work as well as the durational nature of the work itself. At its core, Kaleka’s practice embodies a certain attentive consciousness that you can glean but not quite articulate, because he leaves so much to the imagination, trusting that the audience might not settle merely for arriving at meaning through an easy and immediate deciphering of visual codes but by allowing themselves to be absorbed by the phantasmagorical non-narrative, all that doesn’t seem to happen, all that is allusive yet fantastical, that exists on the margins between fiction and reality, between memory and perception, between thought and desire.