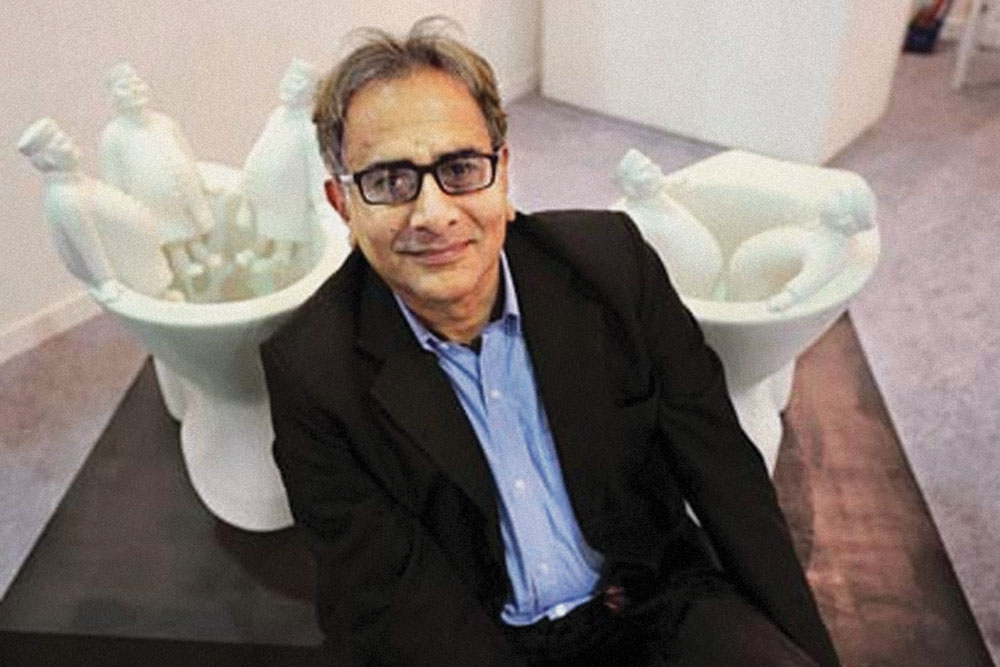 
HOUSE PASSES FROM lived-in domesticity to a slow and painful erosion until it’s dismantled and in its place grows a tree. A priest appears to be consumed in a holy fire, making him simultaneously a victim, a perpetrator and a witness to his own death. At first thriving, a city in a bathtub gets washed away over time. Arranged in an intricate series, Gautam Bhatia’s Still Life consisting of over 200 paintings and 10 bronze sculptures comes to you in waves. Currently on display at the Bikaner House in Delhi, the works explore the transience of life and a variety of themes such as religion and family, labour and love. In the concept note, Bhatia mentions that it took his own ageing for him to realise that architecture, like everything else, was not just made, but also lived and died. The exhibition ‘grew out of that transitory idea of birth and death, drawn and painted over the last two years’.

Given the pandemic’s lessons about mortality and death it looks like the timing of the exhibition is both opportune and ominous. Bhatia, whose friends have suggested that Still Life symbolises the four stages of Hindu existence, assures us that it’s more a celebration than a lament. He tells Open, “It’s not meant to be a pessimistic view of life itself. So, if you notice in the series called House of Cards, the house falls apart on which trees grow. After some time even the trees get destroyed and another house begins to rise up in that same area. Rebirth is an important element in the exhibition.”


The germ of what we see in Still Life began with Bhatia’s drawings of architectural treasures like Connaught Place in Delhi, Victoria Memorial in Kolkata and Empire State Building in New York “as if they were turned into ruins”. Some of his affinity for civilisational remains stems from living in a decaying cultural hub like Delhi, which witnesses a constant struggle between history and modernity at every step. Bhatia has obsessed over the idea of impermanence and fragility, long before the outbreak of the pandemic.

Architect, painter and satirist, Bhatia, 68, dons several hats. Art and architecture, in particular, have shared a cosy history dating back to the Renaissance. Rather than being at odds with each other, both inform his creativity. “For me, they are connected in a way that it becomes hard to separate,” insists the New Delhi-based architect best known for having a practice that has seen him build innovative private homes, retreats and hospitality projects in the last three decades. Bhatia first trained as an artist and has continued to indulge in this passion since. “Art has changed so much,” he exclaims. “It has gone from defining beauty as its centrepiece to having ugliness as its cornerstone today. And from ugliness it’s slipping further into a mode of oblivion. I recently saw an installation about climate change which was just a white sheet tied to a wall with a fan underneath. This kind of vague abstraction doesn’t connect. When art becomes so uprooted from reality it loses its value. There was a time when reality was rendered in such a way that it made ordinary life special. This was true right from the Renaissance up to the 20th century. But as the recent world turned uglier, more uncertain art began to capture the underbelly of life. We are now at a stage of urban reality where it isn’t even possible to distinguish between the two.”

Balancing the demands of housing with aesthetic needs has been an architectural challenge across the centuries. For Bhatia, the question ‘Can a building be both utilitarian and decorative?’ misses the forest for the trees. “One thing that concerns me is the mistaken notion that architecture only means construction,” he says. “The architect merely provides a solution to a need. I always think first if I can do a project where we build as little as possible. Can we make a hotel for 50 people, without making a 50-room hotel? Can a defunct cement plant become a student dormitory? Should we have libraries inside metro stations? India is one of the most overbuilt countries on earth. I think we must begin to build differently and build less.” A trained architect, he believes in buildings that incorporate the values of nature into their core designs. It helps that a large body of his work sits in the tranquil Himalayan foothills, blending seamlessly with the scenic landscape hugging it.

“The mountains make for challenging construction, but one that is eventually more gratifying because as a designer you are less attached to your architecture and more to the landscape,” Bhatia says. One of his recent projects, Nature’s Homestead, is the result of the pandemic which has made people nostalgic for rural fantasies. Located in a windswept valley just above the Jim Corbett National Park in Uttarakhand, Nature’s Homestead is a collection of concrete flat-roofed houses designed keeping leisure, contemplation and solitude in mind—all the things dearly missed in the city. There are themed houses like the Library House for someone who reads or Play House for a more outdoorsy atmosphere. One of his previous projects saw Bhatia turn a nature sanctuary into a children’s retreat. An existing lake that was part of the land parcel was incorporated into the building, instead of its just serving as a picturesque panorama.

‘Art has changed so much, it has gone from defining beauty as its centrepiece to having ugliness as its cornerstone today,’ says Gautam Bhatia, architect and artist

BORN IN NEW Delhi, Bhatia earned his Master’s in architecture from the University of Pennsylvania, Philadelphia, US in 1977. Having won the Louis Kahn fellowship at college, he acknowledges the starchitect’s influence on his own “modernist” sensibility. Kahn redefined 20th century architecture with his Brutalist-inspired geometric patterns and interplay of light and space proving that architecture’s job was more than just providing shelter. It could be philosophy, too, in the way it interacted with nature and local materials. Laurie Baker, who actively promoted the idea of sustainability and believed in architecture’s power for social change, was another giant who shaped Bhatia’s young mind. Meeting the ‘Gandhi of architecture’, as Baker was called, left such a strong impression that Bhatia ended up writing a book on him.

Today, in a highly globalised world, Bhatia doubts if the Gandhian choices of energy consciousness and self-sufficiency would cut it. “Mahatma Gandhi said a house should be built with materials gathered within three to five km of the site itself, with locally available skills. Nowadays, there’s a universal view of what a building should be. A house built in Bolivia is also being built in Almora. It’s made every traditional act redundant. It’s cheaper to take steel and concrete up to the mountains and of course, wreck the mountain with that,” says Bhatia, who is right to worry about the growing threat of climate change and the impact it may have on future living.

Bhatia’s satirical streak becomes apparent when, in a frank declaration bordering on the incendiary, he says that architecture itself is useless in today’s world. Defending that statement, he says, “Architecture neither has the gamechanging humanist values of the legal profession nor the urgent physical essentials of medicine. Most of us, myself included, work for the absurdly rich. These are people generally without scruples or values. So if I build a farmhouse or a vacation home on the beach it has the same effect as a sports car being driven at a high speed. People admire it for a few seconds till the time it’s within your sight. And then it’s forgotten.”

A lack of public places has become a bone of contention in India. Start with New Delhi, Bhatia’s beloved home city and India’s symbolic heart. By way of analogy, Bhatia mentions an incident in Blueprint (2018)—his personal musings on architecture—about a madrassa in his neighbourhood that enjoyed ‘splendid isolation’ for many years. But when taller constructions sprung up around it, the ancient structure was dwarfed and soon ‘became an insignificant reminder of its own history’, Bhatia writes.

A Delhi boy who moved to the US for 18 years after his journalist father was posted in Washington DC, he remembers cycling around the ruins of Lodhi Gardens and Humayun’s Tomb. “But when I came back in 1986 it was really not a city of ruins but a ruined city,” he says with a laugh. You might say an indifferent attitude towards preservation is a quintessential Indian condition but Bhatia has a different take: “You worry less about preservation when you have so much to preserve. We are a culture which has old temples, tombs and monuments almost everywhere.”

‘You worry less about preservation when you have so much to preserve,’ says Gautam Bhatia

Unlike in India, public spaces in America and Europe are considered sacrosanct. ‘What use is public space without public culture?’ he asks rhetorically in Blueprint. Asked the same question now, he tells Open, “Everyone talks about public space. The Italians have their piazzas, the French have their jardins and the English have their parks. What do we have? The main reason is that public life in these countries is very important and that’s why the pandemic has affected them far more than us. Apartments there are one-third the size of Delhi flats or even Mumbai. So, people will have coffee at a little cafe on the street, there’s an outdoor theatre and there’s a chamber music orchestra happening at the corner of 34th street. Europeans and Americans are engaged in public life all the time. Here, our main public activity is eating and shopping.”

Well-travelled Indian urbanites are now quite vocal about their cities fast becoming monotonous sprawls, more concrete junkyard than planned cityscape. Instead of being a worthy addition, architecture is simply an annoyance in most major towns. He admits that more and more now he’s drawn towards working either for “the really rich or the desperately poor”. These two groups “leave you to explore new territory and suggest new ideas. The people in the middle are a meddling nuisance. They are unwilling to pay and have too many bad habits and ideas of their own,” he protests.

One of Bhatia’s ambitious ideas on the drawing board is a project called Future Building. Sharing that vision, he says wistfully, “It may not solve immediate problems of overcrowding, urban shortages, homelessness etcetera, but it will look at possibilities far into the future—a house that has a zero-carbon footprint, an art museum on wheels, a skyscraper made of mud, a car that plugs into the house when not moving, so as to become an additional room. The idea is to explore extreme possibilities, and see if the answers lie in complete madness. Only deranged proposals will provide future possibilities.”