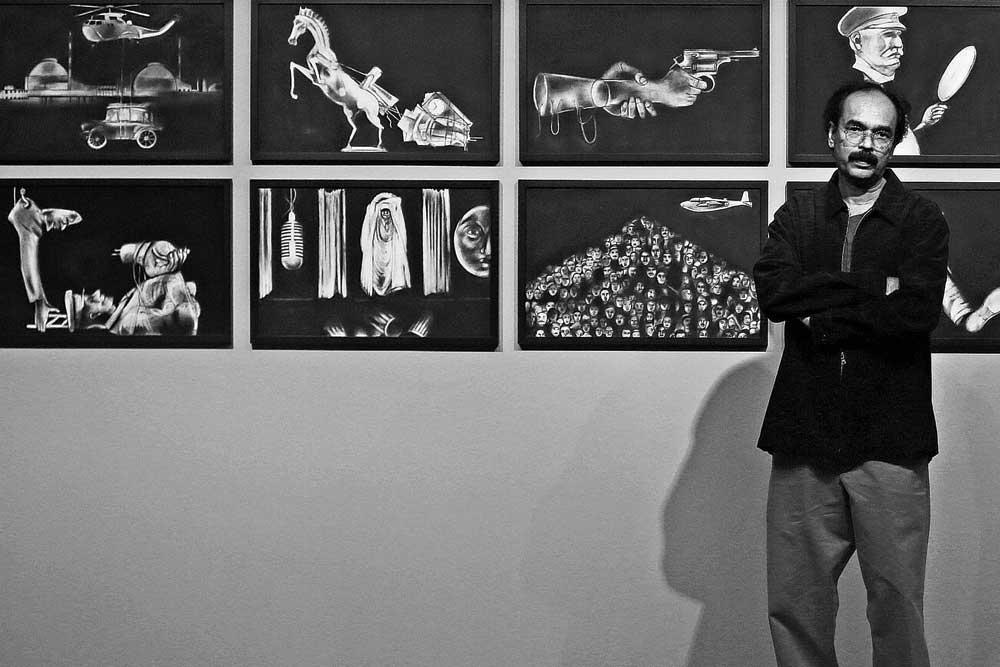 KM Madhusudhanan’s works don’t make for hasty viewing. You need to slow down, and allow the artwork to reveal its details to you. For instance, when one views Hunters in the Desert from afar, the large goatskin seems akin to a sacrificial element, tethered to the wall by threads. On stepping closer, you see a perforated portrait of Portuguese explorer Vasco da Gama lit up with LED lights. The work acts as a pensieve of sorts, offering a glimpse of Madhusudhanan’s childhood memories, of his tryst with the art of Tholpavakoothu (shadow puppetry) in Kerala. He has adapted the technique to create perforated goatskin canvases, which he then articulates with charcoal and ink. Experiments and concepts such as these have kept him busy over the past two years, resulting in a new body of works, ranging from oil paintings and sculptures to ink-and-charcoal drawings. One saw a glimpse of these at his recent solo, Granite, Lamp & Mirror, at the Vadehra Art Gallery, Delhi.

As he readies newer works in his studio in Muringoor, Kerala, including a few for the India Art Fair, Madhusudhanan continues to engage with age-old traditions and modern notions of cultural identity. “I adapt techniques of Tholpavakoothu to portray a contemporary message. While the traditional artists usually depict stories from the Ramayana, and use colour pigments, I use charcoal. They put an oil lamp in a coconut to create shadows; I use LED bulbs,” he says. One could see this wonderful adaptation in three of his works, featuring the imperial crown of the British, the ship that brought Vasco da Gama to India, and of course, the portrait of the seafarer himself.

It is this combination of the personal and the political that forms the cornerstone of Madhusudhanan’s oeuvre. In the past two years, he has also engaged with socio-religious reformer and philosopher, Sri Narayana Guru’s text, Atmopadesa Satakam, or ‘One Hundred Verses on Self-Instruction’, which the artist read at a very young age. “Sri Narayana Guru was born in 1854 and died in 1928. During his lifetime, Kerala was at a crucial juncture. The state was in the grip of the caste system and untouchability and cruelty towards lower castes was the norm,” he says. “He was born into the Ezhava caste, a lower-caste community, but became a scholar.” Armed with knowledge of Malayalam, Sanskrit and Tamil, Sri Narayana Guru used his linguistic skills to reach out to people, thereby starting a socio-religious reformation movement in Kerala in the late 19th century. In 1888, he installed a granite block in a temple as a rejection of Brahminical practices. He then put a mirror in the temple as a metaphor, urging people to look within themselves to find God. He also put in a lamp as a symbol for purifying oneself. “These three simple things communicate so much about life. Which is why I took these as the title of the show—Granite, Lamp & Mirror. His text is extremely simple, yet difficult. Anyone can read it, but you really need to delve deep into the message,” says Madhusudhanan. He has set out to do 100 works inspired by Atmopadesa Satakam, a couple of which were shown at his recent solo.

Born in Alappuzha, Kerala, Madhusudhanan studied painting at College of Fine Arts, Thiruvananthapuram, and print making at the Faculty of Fine Arts, MS University Baroda. As a student, he was deeply influenced by Marxist ideology, and by KP Krishnakumar, a sculptor and painter who urged artists to combine socio-political consciousness in their work. Madhusudhanan’s involvement in communist activities even resulted in his arrest. And when he came home, he found that his mother had burnt all the books and publications related to communism. This incident later found a place in his work, The Capital 1, which depicted a book on fire and was shown at The Guild art gallery in Alibaug.

“Light and darkness give life to a picture. I use this old technique in a modern style to reflect the state of the world today, ”  says KM Madhusudhanan

“Later, I became extremely critical of communism. I came across mentions of violence and cruelty perpetrated by communist leaders in the USSR. I read about concentration camps in Gulag, and of intolerance, of leaders sending whoever opposed them to these camps. It was very shocking for me,” he says. This unsettling feeling and deep awakening led to a series of 90 charcoal drawings—his biggest series so far—titled Logic of Disappearance: A Marx Archive (2014), which was shown at the 2014-15 edition of the Kochi-Muziris Biennale, and in a solo exhibition at Newcastle, UK, in 2016.

Oppression, the human condition and the rise and fall of empires continue to inform his work. He uses historical incidents to highlight contemporary concerns. A prime example of this is the series, Penal Colony (2015), based on a 1921 incident in Malabar when nearly 70 rebel prisoners crammed into a train wagon by the British died of suffocation. “I always play with themes that are relevant in contemporary times too. That kind of organised killing is happening now also,” Madhusudhanan had said in an earlier media interview. Then, there is Babel, which was shown at The Guild art gallery, which talked about the failure of people to connect with or understand each other. His installation featured loudspeakers, organised in the form of a tower, from which different speeches by world leaders in different languages were played out, leaving the viewer with a confused babble of sounds.

Much of Madhusudhanan’s practice is influenced by cinema, which has often formed both the subject and medium of his work. He made documentaries for the Sahitya Akademi, and his first short film, Self Portrait, in 2001. His most celebrated film Bioscope (2008), is based on the real-life story of Varunni Joseph, who ran bioscope shows in Kerala in 1907.

“When I was passing out of Baroda, I was extremely keen on world cinema and film history. I created sketches of cinema objects, of artists and directors. Soon, I started collecting material from the National Film Archive of India, Pune. Around that time, I also visited Museum of the Moving Image in New Jersey, which had 60,000 cinema objects,” he reminisces. In the two weeks that he spent there, he ended up making countless sketches and drawings.

He has extended this fascination with film into his paintings as well, creating a series called Archaeology of Cinema, in which the medium is deconstructed in its physical apparatuses, embodying the revolutionary impulse of industrialisation in the machines used. According to Shalini Sawhney, founder director, The Guild, he made hundreds of small drawings and sketches as part of the storyboards for two of his films, Bioscope and Shambarik Kharolika. After completing the films, he developed some of the sketches and drawings into bigger sizes and in different mediums as well. “That is how he arrived at this language and the idea of multiple images. The multiple panel drawings in The Marx Archive originate from the idea of storyboard in filmmaking. Also, some of the images in Madhusudhanan’s work follow the logic of montage, as in the films,” she says.

His visual vocabulary—both in film and painting—is defined by a play of light and dark. Influenced by the works of Rembrandt, Goya and Caravaggio, he uses this combination to create a dramatic effect. “My film, Bioscope, has a chiaroscuro sort of a feel. I extend the same to my paintings as well,” he says. In fact, Goya’s language in works such as Los Caprichos and Black Paintings has had a profound effect on Madhusudhanan, and he often likes to ‘quote’ from the artist’s paintings in his works. An instance of this could be seen in his recent show, in the work titled Homage to Francesco Goya, in which figures swirl over a globe. The darkness that gathers around them is a tribute to Goya, as these figures get ready to float out of the world—Madhusudhanan’s unique take on the refugee crisis in the world today.

However, ‘unlike Goya’s figures, whose bodies and minds are tormented by the sleep of reason, there is no brutal dismemberment, no blood splatter in Madhusudhanan’s paintings. The artist keeps violence on a tight leash. Even the treatment of paint in his work is dry, its wet translucence subtracted, as if we are looking at the aftermath of an event rather than the event itself,’ writes Nancy Adajania in her text on Madhusudhanan’s oeuvre.

“Light and darkness give life to a picture. I use this old technique in a modern style to reflect the state of the world today,” says Madhusudhanan.