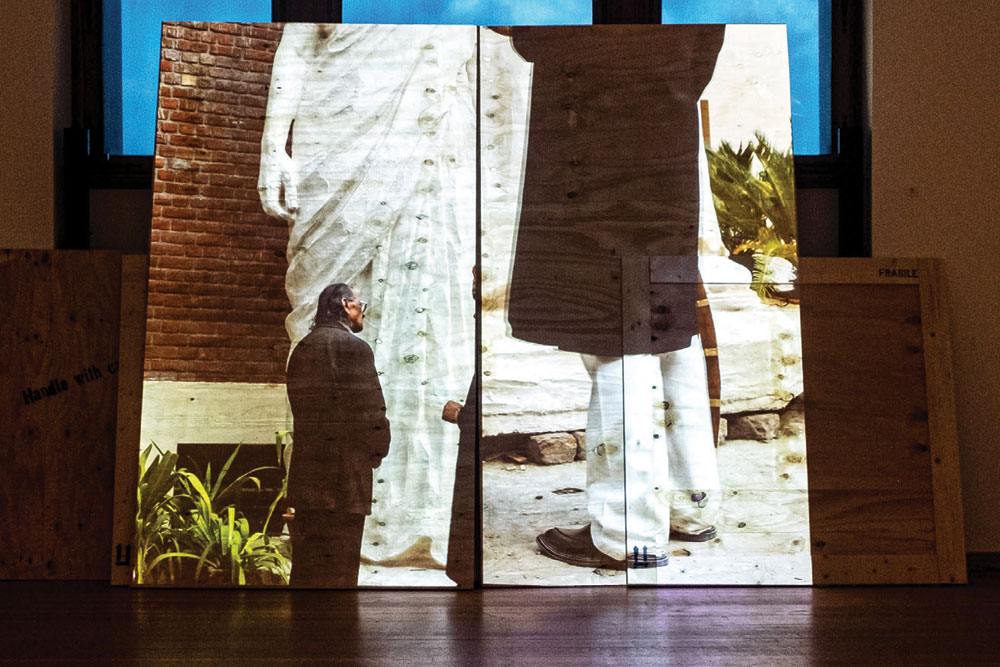 
INCIDENTALLY, BARELY a week before I travelled from a town in Northern Italy to Berlin to attend the opening of Bani Abidi’s They Died Laughing at Gropius Bau, my father-in-law brought home a mango. Perhaps he remembered me musing about how I had missed the season since I’d chosen to spend the summer in Südtirol. It was a large mango. I assumed we would share it. But he told me it was for my consumption alone. That evening, after dinner, I eloped with the mango into an uninhabited room so I could relish it in secret in my childhood manner; with a skilled combination of fingers, teeth and tongue. As I bit into the supple flesh I could tell instantly that the specimen in front of me was not from the Indian Subcontinent. In fact, it was relatively tasteless with infused notes of forced ripeness. When my fruit-hating partner entered the room, he asked if my mango lust had been sufficiently sated. I confessed it hadn’t. I began to unload on him memories of tasting notes of at least five mango varieties native to my ancestral land—Goa. Then, I consoled myself. The mango season in north India usually continues well until July, since the monsoon arrives there later than on the Western Indian coast. All was not lost. As an apple farmer, he was surprised to learn that India boasted so many varieties of a single fruit. “And then, there are Pakistani mangoes,” I told him, “So sweet and juicy, I’ve only ever had them in Dubai.”

One week later when, after a 10-year gap or so, I was reconfronted with Mangoes, Pakistani artist Bani Abidi’s video from 2000 on display on a CRT set in one of the corridors of Gropius Bau, I beamed. Mangoes was one of the earliest instances of video art I’d ever seen. It had stayed with me for almost a decade, its humour and skilful framing settling within my visual and critical vocabulary like a seed. Abidi, the twin-protagonist, had aged since then, but, remarkably, the work itself seemed far from dated. If anything, within her mid-career retrospective, it lay poised on the floor as evidence of her ever-mature artistic trajectory, proudly bearing within it all the traces of her subsequent work. When I put on the headphones and reconnected with the script, I beamed. Amid the large gathering of European press at the special preview, I felt like I had privileged access into a quintessentially South Asian experience. Undeniably, the video itself is ostensibly simple—two women, both played by Abidi, sit by a table discussing the mangoes they are busy gorging on—making it easily relatable, allowing it to transgress most visual and semantic boundaries so it can trespass into the domain of the ‘universal’.


It is the particularities—the identification of the mango with a sense of belonging, the consciousness of it being the national fruit of India and Pakistan, and the national tree of Bangladesh, regions that now share uncomfortable borders with each other but were once part of a larger whole—that make it resonate so deeply with South Asian subjectivity. Abidi uses a mirroring tactic to accentuate similarities while also embracing difference; one she also deployed in The News (2001), in which she respectively portrays an Indian and a Pakistani news anchor broadcasting about the same incident, but with the reportage biased towards each of the depicted national identities. At no point in her early work did Abidi ever fall into the trap of absolving boundaries on grounds of similarities. The alleged simplicity of her subtext gets tangled up in complexity because she is not afraid to speak of difference, usually depicting it by honing in on gestures, by framing moments of manifest individuality even within any performance of collective national identity. That hers is an artistic practice steeped in the aesthetics of consideration is expertly revealed at the ongoing retrospective at Gropius Bau, Berlin, curated by Natasha Ginwala.

Abidi’s artistic gaze is a considerate one in that she brings into focus narratives otherwise sidelined by political obscurantism, infusing them with an absurdist humour in order to critique systemic oppression. Her video works in particular are saturated with audio-visual footage that is edited such that they seem invested in hyper-probability, so that the fictional is disguised as believably real. Reserved (2006) is an excellent example. The premise of the two-channel video is all too familiar to any audience from a ‘third world’ or postcolonial country. Different groups of people either wait voluntarily or are compelled to await the arrival of a minister. Abidi’s filmmaking gaze offers a close-up view of a range of experiences of waiting; an existential state wherein one’s being is compelled to immerse itself in the ennui of dead time. It is through the channelling of a wide demographic’s experience of waiting that clear social hierarchies are visually established. Abidi doesn’t seem interested in the notion of building suspense. The occasional footage of the VIP in his vehicular entourage en route does little to assuage the audience’s desire for immanent closure. We know or are given enough clues to suggest he will eventually arrive. Until then, life must remain at a standstill. We know also that his eventual arrival will change nothing. Which is why Reserved works as a kind of third-world version of Waiting for Godot; it has Beckettian intonations, sure, but minus the first-world privilege of having agency over one’s wait time.

The Address (2007), a series of photographs, also in the show and spread across the museum, is another powerful poetic work depicting people in public and private spaces awaiting a presidential address that never quite happens. The visual reference to Jinnah, Pakistan’s founder, makes it an allegory for the constant deferring of the postcolonial subject’s inherited desire for the freedom and autonomy it was promised during the collective subscription to nationhood, when Pakistan became an independent country in 1947.

Viewing Abidi’s work within a retrospective also reveals her endearing and satirical engagement with masculinity as it manifests both through gender conditioning as well as through its link with patriotism. In Death at a 30 Degree Angle (2012), a video installation she made for dOCUMENTA (13), she constructs for us a fictional glimpse into the project of male pedestalism. A small-time politician has commissioned a sculptor celebrated for his statues of historical figures to construct a 30-ft-tall replica of himself. Considering how Indian male politicians are currently preoccupied with using the taxpayer’s money to fuel their competitive compulsion towards building the biggest or the largest statue of a figure whose masculinity aligns with their aspirations, the video functions as feminist satire. Many special moments within the film show the actor, Dan Hussain, who plays the lead protagonist, posturing himself to ooze an alpha male masculinity he fantasises about possessing but clearly does not, a tendency that arguably lies at the crux of toxic masculinity. Abidi makes abundantly evident through the power of visual suggestion the link between the performance of masculinity by those in power and the toxicity of their governance, and the very real implications of their politics of inconsideration that reinforces borders and facilitates an oppressor mentality unique to postcolonial, patriarchal, capitalist administrations.

Abidi’s more recent work furthers her obvious interests in satirising bureaucracy, masculinity and patriotism, but more than before, by allowing for poignantly subversive discourses to emerge. In An Unforeseen Situation (2015), for example, she references a series of state-run competitions held under the behest of the ministry of sport in the Pakistani Punjab in 2014 during which it was alleged that the country broke several world records. Abidi imagines a fictional failure of such an event which was meant to be the greatest mass singing of the national anthem. We see footage of plastic chairs being piled up because nobody turned up, even though they had been bribed by the government. It turns out that people accepted the gift but did not deliver on the implicit agreement behind the gesture, which was to show up. The absence is a subversion. In choosing not to be present, the citizen marks their resistance and dissent towards the gospel of nation.

Bani Abidi’s video works are saturated with audio-visual footage that is edited such that they seem invested in hyper-probability, so that the fictional is disguised as believably real

In Memorial to Lost Words (2016) she extends her proclivity towards enhancing the visibility of narratives otherwise submerged in mainstream discourse. In this multimedia work, she resurrects for us letters written by soldiers from the Punjab who fought in World War I for the British, displaying them to allow the audience to access their homesickness, their fear, their confusions. She brings international attention to the historically ignored contributions of colonised subjects to the two ‘great’ wars to offer fresh perspective that complicates any easy understanding of who were its victors and its victims and its casualties. Here, too, there is an effort at re-presencing, a strategy that inflects the metaphorical crux of the show, deriving from the titular series of watercolour works, And They Died Laughing (2016), featuring the faces of activists who were either assassinated or who went ‘missing’—code for many forms of silencing dissent—because they vocalised their criticism of the administration. By imagining for them the gesture of having ‘the last laugh’ or suggesting they ‘died laughing’, she registers their absence as the consequence of a powerfully subversive action, turning them back from casualties or statistics to the figures of resistance they ought to be perceived as. Her 2019 series, The Man Who Talked until He Disappeared, is in a similar vein, featuring portraits of male activists who have gone missing as punishment for talking too much.

If The Lost Procession, her most recent work, commissioned by Sharjah Art Foundation, is any indication, Abidi’s practice seems to have poised itself at a fruitful intersection between video and commentary. The video and sound installation focuses on the persecuted Hazara community which has relocated from Quetta in Pakistan to Germany in more recent years, fleeing conflict. Abidi sources footage from a friend, Asef Ali Mohammad, a young Hazara filmmaker, of a memorial ground where lie the remains of the many casualties of the long-standing insurgency. Amid the war-torn landscape, we see the transgressive figure of Ali Parkour honing his parkour skills against border-like walls. Abidi’s use of her own voiceover coupled with her editing strategy is reminiscent of Moyra Davey’s narrative style, but Abidi owns the space, never seeming uncertain, and it’s refreshing even, as a viewer, to have the immediacy of her voice directly intervening, offering a close reading of how she positions her audio-visual footage that in previous works is showcased without the need for a narrator. It will be fascinating to see how her work will be reread and represented at the Sharjah Art Foundation between October 12 to January 12 in ‘Funland’, which has been pitted as a ‘major survey exhibition’ with Ginwala once again at the helm as curator. For, despite the sense of triumph one is inclined to feel on behalf of Abidi, for seeing her work at one of Europe’s leading museum spaces, there’s something even more celebratory about it being staged unabashedly for a South Asian audience that cannot but ‘get it’.