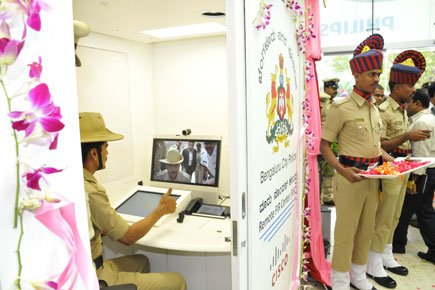 Bangalore became the first city in the country last fortnight to open a kiosk from which police complaints can be made online via video conference. The system, set up by Cisco and called Remote FIR Centre, was set up at Mantri Mall in Malleswaram. The kiosk includes a high-definition video and audio system, a touchscreen and a virtual keyboard. A specially trained constable first welcomes, screens and counsels complainants before they are allowed access into the kiosk. They are then guided by an officer through video conference and even an instant FIR printed out. The officer, sitting at his desk at the Bangalore Police’ Traffic Management Centre, will then transfer the case to the correct jurisdiction for further action. "The two-week old centre is close to notching up a 100 complaints. So far, most relate to thefts and traffic-related ones,’’ says Bangalore police commissioner M.N. Reddi. Lost mobile phones are a main subject of complaints.

Is the idea working? Reddi should know. A city resident, who had earlier complained about haphazard parking of city buses at a particular stop on the official police’ social media site, registered a complaint against the police commissioner himself for not taking action. A bemused Reddi says it was more of a reminder than a complaint and promised to address the issue.

Such interesting instance apart, the RFC is a futuristic vision where the common man can lodge a complaint in an environment that is not forbidding like a police station. He doesn't have to bribe either. Officers feel that many are turned away at police stations for trying to lodge 'frivolous’ or 'useless’ complaints like petty assault cases where there is no grievous injury or lost mobile phones. "If we take such complaints seriously, we can track the IMEI numbers and prevent crimes. But we don’t,’’ admitted an officer.

Gurumurthy V, who visited the FRC to lodge a mobile phone theft, thought this was easier and faster because jurisdiction is not an issue here. "Once I gave the street name where the mobile phone was lost, the officer handling the case via video conference sorted out its police limits as well as told me under what sections the FIR can be filed. I even got a printout of the FIR with a digital signature,’’ he says, impressed with the service.

Another city resident Kavya Kumar says such a kiosk eliminates problems associated with visiting a police station for women–like male policemen leching and asking uncomfortable questions like their marital status. "I don’t have to follow any dress code and women feel safe here (at the mall) to lodge any complaint,’’ she adds. Her husband, who did not want to be named, recalled that once when he went to the local police station to complain about a persistently noisy neighbor, the policeman manning the front desk gave him a once over, loudly noted the make of his mobile phone and expensive-looking watch, asked which car he drove, where he worked and what his salary was! "It was not a pleasant experience even for a man,’’ says this middle-aged IT professional. There are others like Ramamurthy (he only gave his first name), who says that he cannot comprehend the use of technology like this. "I don’t have a smart phone nor can I understand how this works. Where do I lodge complaints?" he demanded to know from the constable in-charge of the kiosk.

Reddi says this experiment makes it safe and convenient for women to lodge sexual harassment and other complaints without having to depend on a male to accompany them to a police station. Only complaints of property and financial disputes are not entertained at the kiosk as these need to be probed further and the first person to lodge an FIR is not always right.