The Film Is Mine, the Losses Yours

The Film Is Mine, the Losses Yours • John’s First among Sequels • The Secret Nuptials 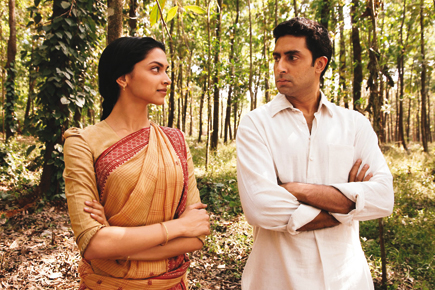 The Film Is Mine, the Losses Yours • John’s First among Sequels • The Secret Nuptials


Ashutosh Gowariker had some important visitors at his Bandra office last week, a few days after the release of Khelein Hum Jee Jaan Sey, by when it was clear that the film was an unmitigated box-office disaster. It appears the head honchos from PVR Films, his producers, had decided to pay the director a visit to discuss the possibility of his “helping them out” to reduce a portion of the losses that they were likely to incur on the film.

Gowariker’s production budget was reportedly Rs 36 crore on the film, to which PVR is believed to have spent an additional Rs 9 crore on prints, publicity and marketing, bringing the film’s total budget to a whopping Rs 45 crore. According to industry estimates, the producers are likely to lose up to
Rs 30 crore on this period film, even after revenues from the sale of satellite rights and home video rights are calculated. No wonder the desperate producers landed up at Gowariker’s office, urging him to “share” part of the film’s losses by offering to return some portion of the approximately Rs 16 crore he’s believed to have made from the film as his writing, directing and co-producing fees.

From what I hear, the director brought his wife Sunita Gowariker, who heads the production side of things at his company, into the meeting. After hearing out the team from PVR patiently, Sunita is believed to have blamed the failure of Khelein Hum Jee Jaan Sey squarely on PVR. “The film is great. It’s your marketing that has failed us. If I were you, I’d let your marketing department go,” she’s believed to have said.

Gowariker didn’t return any part of his fees.

John Abraham, who’s fast facing an extinction threat greater than the Indian tiger, has decided to swallow his pride and work with Sajid Khan, who he hasn’t exactly been a fan of.

Housefull 2, the sequel of 2010’s harebrained comedy directed by Khan, is scheduled to go into production early next year, and while the filmmaker has signed Akshay Kumar and Ritesh Deshmukh to reprise their roles from the first film, he’s replacing Arjun Rampal with fellow good-looker John.

Interestingly, Khan had offered John a role in Housefull too, but the actor—who reportedly found him too arrogant—decided to pass. Also John had his hopes pinned on Nagesh Kukunoor’s Aashayein and Abbas Tyrewala’s latest film, both of which sank faster than anyone had imagined, leaving him in no position to turn down another big film.

Fast becoming the go-to-guy for sequels, John will star in Dostana 2 and Race 2 next year, in addition to Housefull 2, but it’s the remake of the Tamil hit Kaakha Kaakha (that he’s starring in for producer Vipul Shah) that he’s counting on to change his box office fortunes. A hardcore action film in the vein of Ghajini, John plays the role of an upright police officer in the film, for which he spent long hours at the gym until he had abs so hard you could slice bread on them!

A high-profile unmarried Bollywood couple may be hiding a secret. This divorced male star who has been living in with his actress girlfriend for some three years now, was reportedly told off by his father for setting a bad example for his two kids. The actor’s father, a distinguished former sportsman, was concerned that the actor’s children from his previous marriage were being exposed to what he described as “immoral behaviour”.

The actor’s father reportedly insisted that his son marry his girlfriend if they must live together as a couple, so his children suffer no confusion between what’s right and wrong. However, since news of their marriage is likely to hurt the actress’ thriving career, the couple is believed to have settled ultimately for a quiet, private ceremony at the actor’s family home in north India where they were tied together in matrimony in the presence of his children.

It has been decided, apparently, that news of the marriage will be kept secret for now, until the actress decides she wants to take a break from movies and start a family.