Why it is easier for a religious person to be immoral 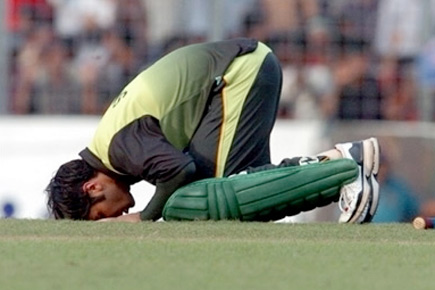 Why it is easier for a religious person to be immoral


There are no atheists in Pakistan’s newly disgraced cricket team. I cannot substantiate the hypothesis, but I would bet all my money on it. In fact, in recent times, the nation’s cricket team has gained a reputation for being excessively religious. Its players have knelt on the cricket field and looked in the general direction of Mecca. They have glanced to their left and to their right in a manner recommended by an authority clearly higher than a physiotherapist. They have grown beards and observed fasts in the middle of a tournament. One of the conspiracy theories that tried to explain the mysterious death of their former coach Bob Woolmer during the World Cup in the West Indies was that the man had paid the price for objecting to the deeply religious ways of his boys. Yet, despite the spiritual nature of Pakistan’s cricket teams, nobody is very surprised that some members of its current squad now stand exposed beyond any dispute for colluding with a bookie. The truth is that the general populations of several cricket-playing nations have for long believed that Pakistani players are shady.

The perception is only a version of the general view, especially in India, that there is something about Muslims that makes it easier for them to indulge in criminal activities. It is a view that you will not find coming out of the mouths of respectable people (at least when they are in public view) or in mainstream publications. But we know that the perception is there in the minds of ordinary people across the world. A common reasoning given to elevate this perception to truth is that since Islam is a universal brotherhood and it clearly puts religion above country, Muslims have a low regard for the laws of man. The counterview, usually belonging to sophisticated people, is that such generalisations are moronic and dangerous—some rotten Muslims do not represent the minds of all Muslims. But most people discreetly or overtly believe that the mathematical probability of a Muslim breaking the law is higher.

A few years ago, I felt what it was to be a Muslim in India when I went around south Bombay pretending to be one highly educated Mohammed Khan looking for paying guest accommodation. Brokers would not return calls, some who did would choose not to turn up for the appointment. Friendly English-speaking landlords would grow serious upon hearing my name. They would ask for ‘passport Xerox’ and reference letters, and then call up the broker to abuse him for bringing to them a Mohammed Khan. The common perception of Muslims is not a consequence of a deep understanding of the community, but of a deep hatred. It is plainly absurd. But there is a mangled truth in this sentiment.

God is the problem. Not just the Islamic God, but gods of all types. We give too much credit to God for our morality. In reality, we want to be good not because God invented it, but because it is a great idea. It is evolution’s best idea. Through the force of goodness, we took care of our own and that was how we survived down the ages. But with the invention of God, we have wasted our innate finite morality on useless things like our own mythical salvation and afterlife.

That is why our politicians and businessmen who donate huge sums to temples (which usually store the funds in giant fixed deposits) have no qualms in being rogues when they step out of those temples. They have spent their goodness on themselves, and they have nothing left to give.

If you really think there is a connection between Islam and the nefarious mind, go to Shirdi. If you stand long enough in Shirdi, you will meet all the top criminals of India. Many of them will be in whites.