In praise of the new Indian man 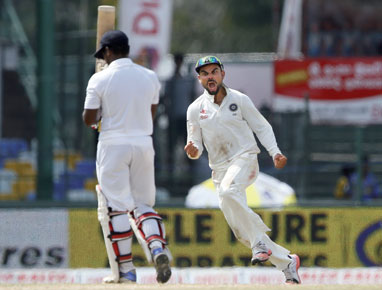 There was a time when he was pooh-poohed in all the genteel drawing rooms. He was almost un-Indian in the way that he swore on the cricket field, mouthing those Punjabi cuss-words that boys in north India learn in their infancy but dare not utter aloud till they are of ‘eve-teasing’ age, lest their mothers thwack them with a belan or their fathers flay them with a belt.

Virat Kohli was the first Indian cricketer to swear unselfconsciously, loudly, fluently on national television. Not the sort of stump-mike solecism that gets caught and relayed to a shocked (yet titillated) nation, but the sort of open-mouthed gaali that’s registered like a noxiously gratifying novelty with Indian cricket fans tired of generations of middle-class boys who lose gracefully to foul-mouthed Aussies and Pakistanis, to sledging South Africans, and to aggressive—at least by the goody-two- shoes standards of Indian cricketers—Englishmen and West Indians.

Only the Kiwis were clean-cut boys like our own, and we wondered, always, why men as big and strong as any Australian could be as well-behaved as our own chaps from good vegetarian homes with doting, protective mothers. Which is why we’ve always liked New Zealanders in India. Their cricketers are civilised, and reassure us that our own good manners are not anomalous.

Is Virat Kohli uncivilised? By the standards of many previous generations of Indian cricketers, he is. But in truth, he’s just an Indian cricketer—a dazzling batsman, the Indian Test captain to boot—who’s caught up with the ways of the world. And not before time.

Virat is not the first Indian captain—or cricketer—to be combative or ‘in your face’. To be sure, players of a mongrel temperament have been a rarity in Indian cricket, which has produced fewer awkward buggers than any other major Test-playing nation—in fact, there are fewer of them in the entire history of the Indian Test game than there are in most Australian Test elevens. Manoj Prabhakar, Shanthakumaran Sreesanth, Harbhajan Singh, and, most significantly, Sourav Ganguly are the only players in Indian history I would describe as habitually unpleasant to opponents—apart, that is, from Virat Kohli.

And yet Kohli is different (in the way that Ganguly was, too, perhaps). Kohli is learning to harness his aggressiveness, drawing it away from ugliness and crudity toward a more concentrated form of combativeness that gets under the skin of his most obnoxious opponents. It’s no coincidence that the two Indian cricketers who’ve consistently unsettled the rhino-skinned Aussies are Ganguly and Kohli.

An Australian journalist of some repute told me that he’d never observed Australian crowds take quite so vociferously and viscerally against an Indian cricketer as those in Melbourne and Sydney took against Kohli. “They hated him, just hated him,” he said. “And I thought, ‘Wow, this is the way Aussie crowds normally react to Poms [the English].’ For them to treat Kohli this way is a compliment, nothing less.”

Kohli could be India’s greatest Test captain. He has just led India to its first Test series victory in Sri Lanka since 1993, and the country’s first overseas Test series triumph since 2011 (when Indian puffed past an anaemic West Indies). After the long years under Mahendra Singh Dhoni, who led India in 60 Tests, but to only 4 victories outside Asia, Kohli promises a revolution.

Unlike Dhoni, who was at heart a mofussil man made good in the metropolis, and was, as such, content with quick hits in the big city—one-day victories and T-20 tamashas that enabled him to return safely to his small- town dimensions—Kohli is a New Delhi boy who was born in opposition to the wider world.

Kohli personifies 21-st century India’s combativeness the way Ganguly did India in the late 20th century. Both are big-city men, one born into Calcutta privilege, the other into Delhi’s middle-class maelstrom. Kohli came into ‘being’ as a cricketer at a time when Indian parents had fewer qualms about letting their children pursue a career in sport: he was the child of the cultural and professional revolution wrought by a late-arriving modern economy in a stagnant and hidebound society.

In a previous generation, young Virat’s cricket would have been snuffed out of him by parents anxious to turn him into a bookish student and, later, a gazetted officer. Instead, he was sent to a coach, to cricket clinics, in the belief that that wielding a bat offered a way of life as valuable—if not more so—than wielding a pen.

Which brings us back to the swearing. When Virat first donned India’s colours, the first thing many noticed about him wasn’t his sublime cover-driving, nor his whipping of the ball—in that delicious, wristy Indian manner—through the leg-side, nor even his clipped young army officer’s haircut. It was, instead, his tattoos, his taut physique, and his extravagant mouthing of abuse every time he took a catch, got out, or— peculiarly—scored a hundred.

Kohli appeared to embody rage. Road rage. Political rage. Cultural rage. Bar- room rage. Hotel-lobby rage. Delhi rage. He was the young man you saw in public places, with other young men, assertive, demanding, on the make, uncaring of what people said or thought of him. You sensed he was from a ‘good family’—his decent English gave that away—but you knew, also, that his was a family worried about his self-control, his discipline.

Most of all you noted his on-field aggression, his most un-Indian state of being charged up all the time. Indian sportsmen can rouse themselves to great vigour and combat, but their default setting is always calm—even becalmed. Virat was different: He was so obviously always on the boil that you feared for him. And yet, even as you feared, you marvelled, for he was taking on teams in ways that other Indian players had rarely done before. The veins in his neck bulged when he swore, his eyes gleamed with disdain for the opposition. He blew kisses of contempt at foreign fast bowlers after they bounced him.

Virat is the new Indian man. The horrible obverse of the new Indian man is the one who looks at modernity and melts down, cornering women and molesting them, using his masculinity in an ugly war against the novelty of his times. Virat is the opposite: His is a masculinity harnessed in the service of combat against other men, in a noble showdown for izzat and the country.

Virat swears. Virat pulls the ball into the stands. Virat plays cricket for India. And after a hard day’s play he speaks to the camera and says, “I don’t care about others. I do what I do. If you don’t like it, just chill.”

Frankly, Virat, we don’t just like it, we love it.