First a Democrat, Then a Socialist

What would Nehru have done if he were alive today, amidst the war between modernity and religiosity? 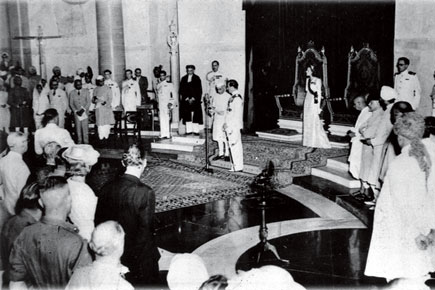 What would Nehru have done if he were alive today, amidst the war between modernity and religiosity?

How relevant is Mao Zedong to contemporary China? That is as good a starting point as any for an appraisal of Jawaharlal Nehru’s place in the continuing project called Modern India. Mao’s portrait still dominates the iconic Tiananmen Square in Beijing, and his enigmatic half-smile stares warily from Chinese currency notes. But would Mao smile or rage at the China refashioned by his steely successor Deng Ziaoping’s famous prescription for national revival from economic stagnation and political instability?

Deng did not care what the colour of the cat was so long as it caught mice. Mao, conversely, was ideologically fixated on red, both on his flag and in policies washed by shades of blood, a price he considered well worth paying in the pursuit of his ideas. Mao saw human beings through the cold eye of statistics; to him, individual life was worthless before common interest, except of course his own. Would Comrade Xi Jinping, president of China today, consider writing a little red book of his own and launch a hundred million purges in a 21st century Cultural Revolution? No. China is ruled now by victims of that misbegotten hysterical outburst sponsored by Mao and a coterie around him commanded by his wife.

The interesting aspect is that Chinese Communism has survived and indeed flourished precisely because it reinvented a creed that demanded devotion to the point of rigidity. The only constant in democracy, by contrast, is change. Governments change and bring with them fresh eyes and minds that can recognise when an idea, however sacrosanct at birth, has outlived its utility.

Nehru has more streets and spaces named after him than you could count through a lazy weekend, and long may they last. But how valid, in the 21st century, are his two most famous, and self-perpetuating doctrines: a socialist economy and non-alignment?

Nehru was a democrat first and socialist second. His thinking was a product of egalitarian objectives. He was a child of luxury, but once he entered public life he could see the physical and emotional devastation caused by hunger and terrifying famine. Famine was not a curse of nature, but of a colonial government that placed British interests above that of the people. In his intellectual and living experience, capitalism was the avaricious handmaiden of colonialism, selling guns for gunboat diplomacy and reaping the rewards of protected trade and commerce.

His socialism was an antidote more than original thought. His logic suggested that an elected government of an independent India would perforce be pro-people, and hence the legitimate custodian of its economy. He proudly handed the commanding heights of a flat economy to the State and set up a Planning Commission to drive the decision forward.

By the time Nehru died in 1964, it was obvious to any objective analyst that those alleged heights were little more than bumps; and that Planning had lost its way. But foundational myths are hugely resistant to reality. It took Congress more than 15 years after 1964 to recognise that quasi-socialism, now blanketed by Mrs Indira Gandhi’s flea- bitten political slogans, had become seriously counter-productive.

For understandable reasons, the Congress could not find the will to officially abandon its inheritance, but the price of uncertainty and compromise has been heavy, both for India and the party. India will recover, because democracy has created an alternative. We shall have to wait and see what happens to Congress.

It is clear, though, that the party cannot resurrect itself without new clarity on its economic framework. That is the crux; the rest is semantics.

Nehru’s unswerving faith in democracy should never be underestimated, let alone taken for granted. He became Prime Minister at a time when France had not given women the vote. Adult franchise was not considered such a good idea by many of Nehru’s most famous contemporaries: Mao, at one side of spectrum, sneered, and Winston Churchill, at the other, waited for uppity India to sink into chaos. The environment was deeply troubled by post-colonial partitions even as the fog of a Cold War engulfed continents. America had no time for the shaded nuances of democratic opinion when it strode across like a white knight chasing fire-breathing red dragons.

The story from the newly-independent nations was not encouraging either. Almost all the great figures of what came to be known, inelegantly, as the Third World, quickly used the pretext of problems to set themselves up as dictators and despots for life. When wasteful royals became unacceptable, or irresponsible legislatures could not function, generals stepped in to ‘save the nation’. Nehru was aware of the temptations of Ceasardom long before he became Prime Minister. In a well-known short essay, he mocked himself for entertaining pretensions, even if only in his imagination.

If we want to understand how easily he might have slipped, all we have to do is note that just a decade after his death, his daughter Indira Gandhi imposed dictatorship upon India through an Emergency. And if she had continued to be guided by her son Sanjay, instead of recalling the spirit of her father, India might have been under dictators for another two decades with who knows what implications. Of course, the Indian people saved democracy when the crisis came, but Nehru understood the power of practice and precedence. He set the patterns, and strengthened the country’s institutions—not least of them being the media, which would keep democracy alive through faltering democratic governance. It has taken 30 years for Indian democracy to re-elect a stable government, but at no point in this difficult period was democracy ever under question.

What is under question, and probably deserves a quiet burial, is the other pillar of Nehruvianism: non-alignment.

Nehru’s mind was obviously shaped by the horrors of the 1940s, an age when nations committed genocide and fought wars with a barbaric ferocity that is both inconceivable and incomprehensible. India compounded this with Partition. When everything turned into ash, Nehru found himself in charge of the ash-heap. The great driving force behind his commitment to non-alignment was the desire to shield India from war. But he was so fixated by the prospect of war between nuclear superpowers, that he quite forgot that wars have more than one dimension. This is surprising, given that Pakistan’s very first decision as an independent state was to launch a war to seize Kashmir, which quickly expanded into a war against India. Nehru was so determined to find peace that he dismissed Pakistan’s invasion as a seasonal aberration. And he dismissed any possibility of a war with China in the curious conviction that such a conflict would lead to a world war, which China would never risk.

Non-Alignment failed India even at the height of its glory days. No non- aligned country stirred when Chinese troops broke through the Himalayas. It was left to a supremely aligned United States to come to India’s rescue. Mao’s forces withdrew to a line that they still hold across 4,000 kilometres.

India, in a display of collective inertia, remained loyal to non-alignment even when Pakistan repeated its invasion in 1965. It was a close run. But for a bold decision taken by Prime Minister Lal Bahadur Shastri to defend Kashmir through a counter-offensive in Punjab, India’s external boundaries and internal stability might have been shattered. But the great betrayal was not the predictable behaviour of Pakistan. A large number of non- aligned countries abandoned any pretence of neutrality and supported Pakistan with material and moral support during the fighting. Once again, India was isolated.

What was our generic response once the dust had settled with the Tashkent Agreement in January 1966? Our foreign policy mandarins began to prepare for the next non-aligned conference.

Mao, perhaps because he had a better understanding of strategic dangers, protected China with a true leap forward when he triangulated the fixed lines of Communist alliance and reached out to America.

China is still reaping the advantages of that historic move. What did we do? We clung to a straw floating on international affairs in the hope that it would save us from drowning. Indira Gandhi corrected this illusion with the Indo-Soviet treaty in 1971. And yet, such is our ability to fool ourselves, we still pretended that there was some merit left in a theory that had become as moribund as a swamp.

Another complex war is raging through large parts of Asia and Africa. It is an ideological war between democrats and theocrats; between nations that seek modernity and militias determined to impose deadwood religiosity upon their polity. The Islamic Jihad, which in fact is not very Islamic and certainly not Jihad in its original sense, has laid waste a stretch of the globe from the borders of India to north Africa.

India is not without options. For prosperity, we need alliances with nations that recognise the chaos that threatens us all, and have the will to sacrifice blood and treasure in this epochal challenge.

What would Jawaharlal Nehru have done if he were alive today? To claim that he would have stuck to an idea that served the purpose of the 1950s is to condemn Nehru as a leader with a dead mind. That is an injustice to his memory.