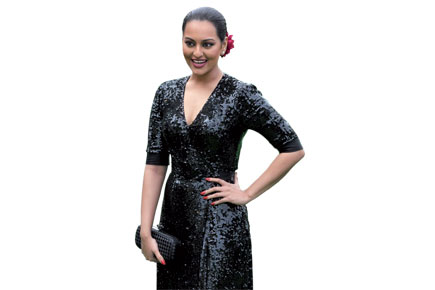 Given that she has long had a reputation for losing her cool at public events, even snapping at fans when the attention gets too much, it was particularly refreshing to see Kajol in a surprisingly good mood on an early morning flight to the capital last week, where she was committed to participate in a panel with her husband.

While Ajay Devgn flew in directly from London, his missus—dressed in jeans and a black top, her hair bunched and a pair of shades perched on her nose—travelled with her hair-dresser and make-up woman, who were seated in the row behind her in business class, and whom she repeatedly turned to chat with during the flight.

Moments after the flight touched down, the actress made a call to her mother-in-law, urging her to make sure her son Yug got some sleep right after coming home from school, or he’d be cranky all day. Kajol didn’t seem to mind that fellow passengers were eavesdropping on her conversation, which wasn’t exactly difficult, considering she was speaking loudly into a hands-free while waiting to alight.

What’s more, there were no angry outbursts or impatient sighing when everyone from star-struck airhostesses to fellow passengers requested autographs or cheerfully started conversations with her. A new calmer, warmer Kajol, perhaps? We like.

She’s gone from being one of the most promising young actresses in the business to one who appears to be drawn to mostly insignificant parts in big movies. It’s such a shame, the undoing of Sonakshi Sinha.

In Lootera, earlier this year, it became clear that given the right parts, she could deliver the goods. Effortlessly using her eyes to convey hidden reserves of pain and resentment, she gave one of the best performances by a female actor in 2013. But this is also the year she showed up in films like Once Upon a Time in Mumbaai, Dobaara, Bullett Raja, and, most recently, R…Rajkumar, none of which required her to so much as flex her acting chops.

In R…Rajkumar, a regressive Telugu-style actioner, Sonakshi had the unenviable job of mouthing crude lines that sound right out of a bad 1980s potboiler. In one scene, standing with her sari pallu off, she snarls at the film’s villain (Sonu Sood), promising to strip down for him if he can first vanquish her lover. In another scene, she taunts him by describing how her boyfriend will make love to her on their honeymoon.

Though Sonakshi has repeatedly insisted that her actor-turned-politico dad Shatrughan Sinha is dead against her wearing revealing clothes on screen or embarrassing him in any way, it appears the family is quite liberal about the kind of parts she picks. The coming year doesn’t promise a change of range either, given that Sonakshi’s next two releases will be Ghajini director AR Murugadoss’ remake of his own South hit Thupakki opposite Akshay Kumar, and Prabhudheva’s next, titled Action Jackson, with Ajay Devgn.

Aah! What a squandering of the potential we saw in Lootera.

He’s always been the most charming star, a marked characteristic that has often got him out of sticky situations. In one such instance recently, the A-lister showed up roughly four hours late to shoot for a campaign with as many as seven heavily pregnant women who’d been cooling their heels waiting for the megastar to turn up.

He had reportedly informed the unit that he was running two hours late, and instructed his team that the ladies be well attended to. Naturally tempers began to rise and hormones were all over the place while the wait for the actor got longer.

But when he strode into the room—much later than he’d promised—he apparently won over the women instantly with his inherent likeability. Laying the charm on thick, he had them eating out of his palm in a matter of minutes.

In less than half an hour after he arrived, the campaign was shot and completed, the women adequately wooed, and the superstar on his way to the airport to board an international flight.