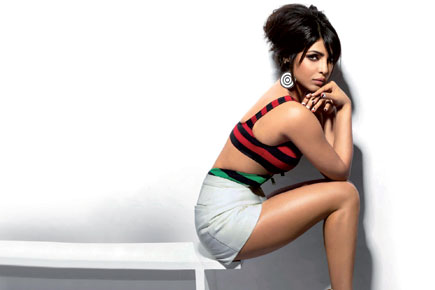 Reports that the desi version of 24—produced by and starring Anil Kapoor—didn’t quite achieve viewership targets haven’t dampened the actor’s spirit.

Reports that the desi version of 24—produced by and starring Anil Kapoor—didn’t quite achieve viewership targets haven’t dampened the actor’s spirit. AK is insistent that a second season will soon appear. He admits that the show couldn’t have attracted the same volume of viewers that embrace traditional melodramatic soaps. “This is a new format, a new genre for Indian television, and it certainly has a very different look and feel,” Anil explains. “The good sign is that viewership grew with each episode.”

Before he begins work on 24 Part Deux, however, Anil will dive into Zoya Akhtar’s Dil Dhadakne Do, in which he plays papa to Priyanka Chopra and Ranveer Singh. His shooting dates for that film have reportedly overlapped with the dates he’d allotted for Anees Bazmee’s Welcome sequel (titled— what else?—Welcome Back), and now both filmmakers are trying to find a way to optimise their dates with the actor.

Later in the year, he’ll also shoot No Entry Mein Entry (again to be directed by Bazmee), the cheerfully silly-sounding sequel to the 2005 blockbuster that’ll reunite him with Salman Khan. The film, to be produced by Anil’s brother Boney Kapoor, has been delayed for months—presumably because of Salman’s chock-a-block schedule, and also because of the falling out between Salman and Bazmee during Ready. Harrowed producer Boney, however, stepped in to mediate recently.

Bitter exes can be a dangerous thing, and Priyanka Chopra appears to have learnt that the hard way. The actress is currently seething over a recently-announced film project, involving her former boyfriend Aseem Merchant and ex-secretary Prakash Jaju.

Model-entrepreneur Merchant is producing a film inspired by Priyanka’s life, which will include her messy split with Jaju. The actress, when urged for a reaction, said she was disappointed that someone she knew and trusted would want to exploit her life.

Jaju, who claims responsibility for grooming Priyanka into an A-list movie star soon after she won the Miss World crown in 2000, famously clashed with the actress and her late father when they terminated his services. He went on a public tirade against the actress, claiming underpayment, and reportedly even leaked telephone records, which revealed many late-night conversations between Priyanka and her much-married co-star Akshay Kumar. The Chopras subsequently sued Jaju for intimidation and stalking, which led to his arrest.

Now it seems Jaju has a means to embarrass the actress again. Jaju claims the film is about his own life, although he has revealed that his history with Priyanka will be a big part of the film. In the same breath he insists he has no hard feelings against her. Confused much?

The daughter of an eminent writer-filmmaker is reportedly preparing to shoot her new film which will be an investigative account of one of India’s most shocking unsolved crimes. The lady in question, who has directed two films earlier—both box-office failures—has found a producer in a respected ‘art-house’ filmmaker who was able to secure funding and distribution for the project because of his own involvement. He has agreed to be on set throughout the shoot, which was reportedly the financier’s only condition in exchange for bankrolling the film.

The highly sensitive and more than likely very controversial film will examine a high-profile double murder from the police perspective and will offer a logical theory about the identity of the perpetrators. The actual case itself continues to play out in court.

The filmmakers have roped in a much-admired male actor to take the role of the investigating officer. The actor, currently filming a Hollywood blockbuster sequel in Hawaii, is believed to have taken a substantial pay cut for the film as a sign of gratitude to the producer, who gave him one of his best roles some years ago.