All the President’s Pioneers 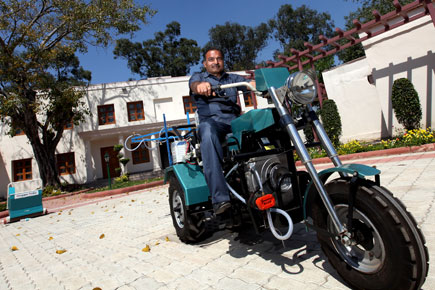 “After coming to Delhi, my spirit has found a new-found strength. Now I can even travel to America alone,” says Haobam Sanaton Singh, a 55 year portrait artist from Manipur, whose first-ever visit to Delhi as part of Rashtrapati Bhavan's Artists In-Residence programme (2015) has been nothing short of transformational. Sanaton Singh has been devoted to the craft of painting all his life. For the last 15 years, after he was gifted a Minolta camera by a patron, he has been clicking pictures of well known personalities from Manipur to create their likeness on canvas. In his art gallery, which he opened in 1999 and where none of the exhibited paintings are for sale, he has assembled 210 of such portraits of writers, musicians, athletes and many other persons of renown. “You have to preserve history. Manipur is changing everyday. My gallery will serve to expand the knowledge of the future generation about Manipur's historical legacy,” says Singh who one day hopes to nail the Guinness World Records for the highest number of portraits painted.

Sanaton Singh is but one of the many other starry-eyed inventors and artists who were flown down to the Capital to spend two weeks in a creative crucible set amidst the impeccably manicured environs of Rashtrapati Bhavan’s living quarters. To make the stately Bhavan more accessible to the general public and help a selected set of innovators, artists and writers—young and old—forge linkages to take their ideas forward, Pranab Mukherjee, launched two schemes under the aegis of the ‘Scholars In-residence’ programme on 11 December 2013—one for writers and artists and the other for innovation scholars, particularly grassroots innovators. Jogen Chowdhary, Professor Emeritus of Visva Bharati University, Santiniketan, was the first Artist In-Residence. Encouraged by the success of the first scholars In-residence scheme held from 1 July to 20 July 2014, the second edition, which was held this month from 7 March to 22 March, brought a medley of knowledge holders—particularly innovators as young as 14 years of age.

“For developing countries like India, we can’t focus so much attention and manpower for garbage unloading when there are so many other problems to be dealt with,” asserts 15-year-old Priyanka Mathikshara, a science student from Chennai, who was inspired to innovate after seeing a hulkingly big diesel-powered garbage truck coming in at 7’ o clock every morning, at the time of going to school, to collect trash from the overflowing municipal bins kept outside her house. The stench and the health-risk posed by this scenario led her to design a solar-powered public dustbin which automatically crushes trash and communicates signals to municipal authorities once the bin is full, reducing the need to employ garbage bins along the streets and also the number of people required to unload trash into garbage trucks. “There are 1,22,000 people working in Chennai alone to just unload garbage. That’s not good. With this technology, they can be employed in other streams,” says Mathikshara whose innovation sits well with the principles of Swachh Bharat Abhiyan.

Even 15-year-old Diptanshu Malviya from Rajasthan has devised along with his brother, a nifty little motorised device in tune with the tenets of the Swachh Bharat Abhiyan: the wrapper picker. This technology automatically lifts littered bits of papers, pouches and wrappers from the floor and assembles them in a bin for later disposal. “I saw old rag-pickers bend and pick up all kinds of small garbage at the railway station. This creates tremendous back problems for them. The wrapper picker will reduce the need to bend down to pick such garbage,” he says with enthusiasm. And when the 14-year-old prodigy Sarthak Shukla from Uttar Pradesh saw his mother unable to reach out to the inner recesses of their home refrigerator to take out food, the young boy surprised his unsuspecting mother by conceiving a cylindrical shaped refrigerator with rotatory trays which allows for easy access of food items kept at the back of the fridge. These young innovators unanimously agreed that they would become scientists, and that the Rashtrapati Bhavan residency programme has given them a platform to meet key industry professionals to develop and patent their innovations.

Apart from some of these unusually motivated youngsters, the residency also had bright engineering graduates on the cusp of making important career breakthroughs. Like the 28-year-old TS Anand from IIT Madras who has developed a much more flexible prosthetic knee for uneven terrains, or 27-year-old Shantanu Pathak from Mumbai who has assembled an end-to-end solution pregnancy care kit called ‘Care Mother’ which will provide regular healthcare access for pregnant women residing in remote rural areas. And 28-year-old Vikas Karade from IIT Mumbai has mastered the complicated algorithm to generate 3D models from 2D X-Ray images in order to bypass expensive CT scans in India.

An important dimension of the In-Residence programme is the encouragement given to grassroots innovators—people whose novel initiatives respond to and address extreme local situations. Like 50-year-old Mansukh Jagani, a farmer from Amreli, Gujarat, who has engineered a motorbike into a multi-utility farm device called ‘Bullet Santi’ which can be used for ploughing, weeding and sowing seeds apart from spraying. This affordable piece of farm equipment has replaced expensive bullock carts and tractors and is quite sought after among farmers in the Saurashtra region. Jagani’s Bullet Santi occupied the pride of place among exhibits of other innovators at the residency programme. When 60-year-old Mohanlal B, a diesel mechanic from Kerala, created a reversible reduction gear for marine diesel engines to improve maneuverability and fuel efficiency, he did not expect that companies like Ashok Leyland and Yanmar India would approach him to combine their engines with his advanced gearbox, years later in the Capital. “The last 15 days at the Rashtrapati Bhavan have been a continuous dream for me… When I met the President yesterday, I really did pinch myself to believe this is happening.”